What: The deployment of ‘narco-sub’ vessels which include submarines, semi-submersible (SPSSs) vessels, narco-torpedoes, and low profile vessels (LPVs) in Colombia as a tactical countermeasure to the increased effectiveness of law enforcement agencies and military services in detecting and seizing planes and go-fast boats.  These vessels provide a new means for transporting and delivering narcotics to their intended destinations while lowering the risk of detection and interdiction.

When: Indications traced back to at least 1993 near the San Andres Islands, Colombia.  In that interdiction, the captured semi-submersible vessel was about 7 meters long and had the capacity to carry up to 2 tons of narcotics.  By the mid-2000s, there had been a significant increase in the number of semi-submersible (SPSSs) vessels and low profile vessels (LPVs) found and seized by Colombian and U.S. authorities.  The design of the confiscated vessels reflects an evolutionary engineering process.

Where:  Most recently, the vessels are being manufactured near Colombia’s Pacific coastline.  Smugglers carry building materials, including heavy equipment like propulsion gear and generators into jungles and then assemble the vessels under jungle canopies.  Once completed, the vessels are moved through mangroves via muddy rivers that empty into the Pacific Ocean.  Once there, the vessels travel northward towards Central America and Mexico where they will transport and deliver narcotics.

Why:  Due to the increased collaborative efforts of law enforcement agencies and militaries as well as their increased tracking and policing technologies which enabled them to detect drug planes and go-fast boats with greater effectiveness, smugglers developed ‘narco-subs’ as an innovative, alternate counter-measure for delivering their narcotics.  These vessels have been custom-built by drug traffickers to smuggle their narcotics in an effort to reduce the risk of detection and seizure.

Evolution:  When examining the various vessels seized to date, we can observe an evolution in the engineering used in these ‘narco-sub’ vessels.  The first vessel confiscated (1993) was truly a rough initial experimental model, built out of fiberglass and wood.  The San Andres semi-submersible as it came to be known was able to control its running depth and direction.  However, this vessel was not able to fully submerge. Hence, it was visible from the air. Moreover, its speed was relatively low, estimated to be less than 10 mph. These attributes converged to make its detection highly possible.

During the years that followed, perhaps until near the end of 2004, the ‘narco-sub’ vessels went through an experimentation phase during which cartels attempted to improve design and performance capabilities through trial and error.  It is during this phase that we can find the 1994 Tayrona model and the 1995 Cartagena model.  Both of these vessels were submersibles capable of self-propulsion and full submersion. Even though their engineering was relatively rudimentary, these vessels were still capable of travelling longer distances while carrying larger loads of narcotics.  Hence, their improved design allowed them to travel slightly faster and submerge under-water, while having an increased carrying capacity. It is also during this experimentation phase that some drug smugglers contracted Russian engineers to help develop a better narco-submarine (see Facatativa submarine).

Interestingly, between 2005 and 2006, authorities seized an increased number of similarly designed vessels which seems to indicate rapid consistent construction which in turn signals a rapid prototyping phase taking place.  Since most of the seized vessels during this time period seem to exhibit similar design characteristics, it is possible that drug traffickers may have streamlined their scope of designs and focused on building certain models.  Most of the seized vessels seem to resemble go fast-boats that were reconfigured so that their profile is lower and hence they are less visible. This is also the phase during which we see the emergence of low profile vessels (LPVs). The vessels captured during 2005 and 2006 seem to fall under the category of LPVs.  These vessels had greater stealth, better operational performance, and increased speed and size.

It is difficult to determine whether at some point drug cartels decided to focus mainly on building LPVs instead of submarines and that is perhaps the reason for the increased number of LPVs that were detected.  There is also the possibility that drug smugglers employed a mixed strategy of using both LPVs and submarines concurrently and the LPVs may have been less effective in avoiding detection, thus explaining why they may have been captured in greater numbers.

Beginning in 2007, authorities witnessed more advanced capabilities in narco-vessels, along with more effective designs that seem to have become increasingly standardized.  In essence, this is a phase of standardization and design maturity.  Narco vessels seized after 2007 were faster, more stealthy, and capable of carrying bigger loads of drugs than earlier models.  During this period, a narco-sub was capable of reaching speeds of 11 miles per hour while carrying up to 10 tons of narcotics worth around $200 million USD wholesale.  Moreover, some of these newer models are powered by a 300 / 350 horse-powered diesel engine.  They also carry large fuel tanks which allow them to travel a range of 2,000 miles (3,200 km). Because the majority of their structure is made out of fiberglass material and they travel nearly below the sea surface, these vessels are almost impossible to detect via sonar or radar.

In recent years, ‘narco-sub” vessels (mostly LPVs) have been built with upper lead shielding which helps to minimize their heat signature and hence they can evade infrared sensors.  Some of the newer models have piping along the bottom to allow the water to cool the exhaust as the ship moves, making it even less susceptible to infrared detection. This suggests that enforcement agencies face great challenges in finding them, and thus, must detect them from the air, though they are painted usually in blue and yield almost no wake. They also have ballast tanks to alter the vessel's buoyancy and are equipped with a satellite global positioning system that aids navigation. 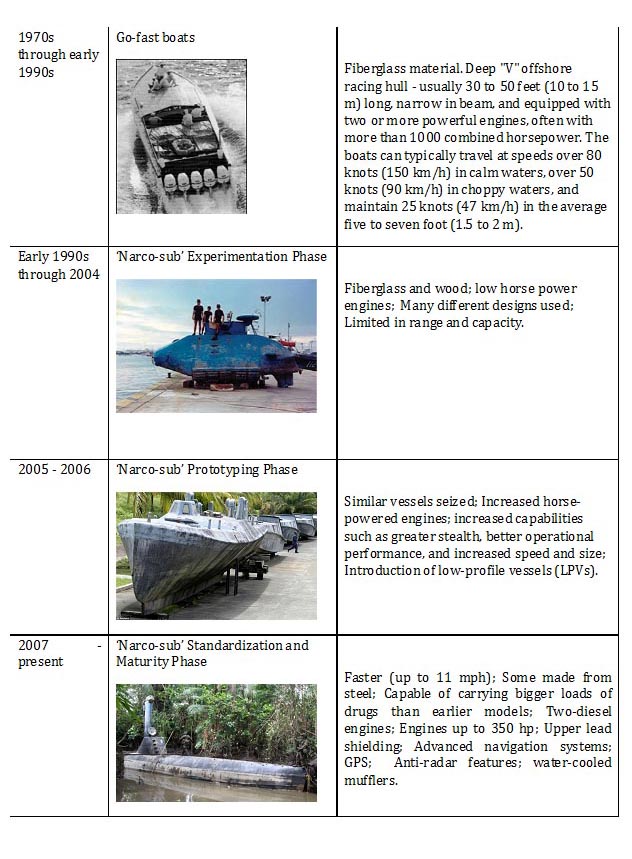 By Jim Popkin at Wired Magazine

8. Narco-Submarines Of The Colombian Jungle

By Jake Hanrahan for Sabotage Times

By Sibylla Brodzinsky at The Guardian