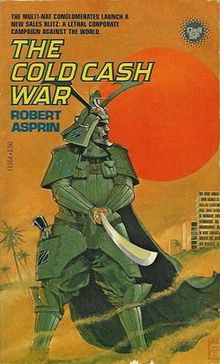 [Note: I originally received this book as a gift from the author in the early 1980’s. I pulled it out again recently, as it reached its 40th birthday this year, and to my surprise found elements of it held up well enough that I thought they deserved to be shared.]

“If anyone with enough money can wage war for any reason they want to, then new superpowers will emerge: the ultra-rich and multinational corporations.”

Robert Asprin served in the US Army during, but not in, the Vietnam War, then became an accountant for a multinational conglomerate. He combined those experiences and a passion for martial arts, military history, and science fiction for his first book, The Cold Cash War. This 1977 “novel of the future” featured a less Neuromancerish pre-cyberpunk/pre-Blade Runner dystopia-lite where traditional nation-states are either impotent underlings or peers of global corporations (Zaibatsus).  They are served by mercenaries who play out mostly non-violent wargames against one another to settle business disputes by other means. The book’s plot moves toward these games becoming increasingly violent and attracting attention and involvement from a coalition of nation-state militaries.

This work and this world, despite the numerous flaws in both, still have insights into modern strategy, policy, and commerce, and perhaps to the dodgy and confusing modern connections between them.

First, the reader must take the book as a “fable of the future” rather than a plausible scenario. The rampant indoor smoking, day-drinking at work, pay phones, and overt and accepted sexual harassment will turn off those expecting anything too literally predictive (note “overt and accepted” as qualifiers). And the dialog and characters are a predictable mash-up of the worst lines from Mad Men (not that there were many) and most any of Tom Clancy’s books.

But once those issues are ignored or taken into context, the reader will find the Cold Cash War gets a few things about the future correct (so far) and asks some big questions, some seemingly cringe-worthily contemporary in 2017.

In the world of the Cold Cash War, some manner of Russo-Chinese conflict has occurred and resulted in a sealed-off “C[Communist]-Block” through which information, products, and people rarely leave or enter. The United Nations and what was, in 1977, the Free World, go on about their business seemingly without much risk of war between themselves. Large multi-national corporations, however, which at times in the past resorted to kinetic actions to protect and increase their own interests and holdings, have agreed on a way to limit damage and expense by hiring mercenaries (many of whom with experience in actual warfare) to play a form of laser tag in remote and ungoverned spaces. Teams of corporate negotiators, far from the action, work out rules of engagements and divide up spoils based on these wargame outcomes.

In this future, corporations rule the world: The nation-state and UN are given all due (which isn’t much) respect, but only as much as their hard power resources demand. Private Military Corporations work for private corporations, and the countries appear to be neither left without the best nor brightest in their service. The corporations also make the nation-state militaries’ hardware, which presents some distinctive advantages for private industry when the shooting starts.

Condettierri-style exchanges plausibly extrapolate nation-state weaknesses and their militaries as corporations take on more the attributes of Renaissance Italian city-states (accordingly, Machiavelli gets mentioned, as do Sun Tzu and Clausewitz to round out the Canon).

Political leadership is corrupt, dishonest, and self-serving, less popular than even the warring multinationals, while the government militaries are less professional, and possibly even less popular, than the mercenaries.

- Today, polls suggest that the American public does have a higher opinion of business than of Congress, although the mid-70’s opinion of US troops has improved to near-deification levels (while actual effectiveness against non-conventional forces hasn’t shown the same level of advancement).

An independent information broker, alone in his room with a globally-connected computer network and a global network of informants (checking in via pay phone, sure, but those still would offer a greater assurance of anonymity than cell phones or emails), sells his (mostly) open-source information to the highest bidder, and as a hobby uses what he receives to try and predict major world events.

- The brokerage is reasonable facsimile of companies like Stratfor, and me, as right now I stand alone, in my house, with screens and invisible wires connecting me to the political and military machinations of the world.

The nation-state is on the decline, still around but increasingly less relevant to its original purpose.

As the plot that moves along, in fits and starts, through this world it brings up (at times none-too-subtly) some questions to ponder and see played out…

- What happens when playing war, with many rules-of-engagement to make it more humane, make it actually more cruel and drawn-out?

- Who or what enforces these rules-of-engagement and treaties in a multi-polar (or G Zero) planet?

-  Is a country’s (or organization’s) military strength really relative, or relevant, to the money spent on it?

- And if it is all about the money, be that in paying fighters or buying equipment, then what happens to loyalty and contracts when that money shifts sources or amounts? However professional an armed force, if its greatest or only motivator is money, it could reasonably be expected to change sides, or at least provide less effort, and still maintain its own brand of bushido.

- In time, are corporate armed forces just as likely to become as slow and unresponsive to “changes in the system” as national armed forces?

- And, extrapolating a bit from implications in the mercenaries dialog, what are the ramifications when political and military leaders hold equal or greater allegiance to corporations than to their respective country?

War has always allowed some, from arms dealers to black marketeers to poor recruits, to make more money than they would’ve earned from peace. The futurist couple Alvin and Heidi Toffler, whose earlier writings may have helped prompt some of the book’s ideas, made the argument that countries make war the same way they make money. A recent documentary, meanwhile, has argued that war has become a way of making money unto itself (granted, this doc isn’t alone in advancing this concept, and there’s no dearth of examples of the equally murky ways that “defense” money changes hands, legally or not). This fable shows the limits of what that money can actually get a person, or country, or corporation, when order breaks down and things become nasty and brutish. Eventually, hard power wins out over the symbolic economy, and the characters (and readers) are taught the simplistic if profound lesson that “political power grows out of the barrel of a gun.”

For that, and for its musings on corruption, power, propaganda, and by-gone scenes of acceptable office day-drinking, a copy of the out-of-print Cold Cash War deserves a place on our small wars’ bookshelf.

J. Overton is the Internal Relations Manager for Navy Region Northwest. He has also been an adjunct instructor for the USMC Command and Staff College, a historian for the Army, and served in the U.S. Coast Guard. A version of this paper was originally presented at the 2011 Naval History Symposium. The views presented are those of the author and do not necessarily represent the views of DoD or its Components.