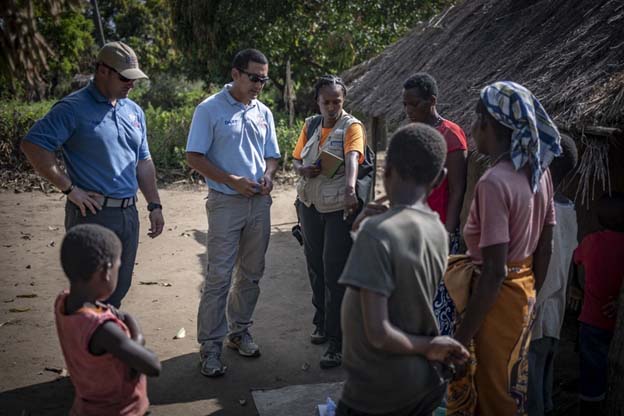 A single mother of four children, who lost part of her home during Cyclone Idai, talks to members from World Vision and U.S. Agency for International Development (USAID) in Nhamatanda, Mozambique, April 9, 2019. Combined Joint Task Force-Horn of Africa is leading U.S. Department of Defense Cyclone Idai relief efforts in support of USAID’s Disaster Assistance Response Team. The task force is helping meet requirements identified by USAID assessment teams and humanitarian organizations working in the region by providing logistics support and manpower to USAID at the request of the Government of the Republic of Mozambique. (U.S. Air Force Photo by Tech. Sgt. Chris Hibben)

The U.S. Army Multi-Domain Operations (MDO) concept emphasizes the importance of active engagement in competition to expand the competitive space. However, to defend U.S. interests and deter conflict abroad, the Army must implement an engagement strategy that includes joint, interagency, and multinational (JIM) partners. Across the competition continuum, civil affairs forces are the key facilitators for military-to-civil engagements which include JIM partners, international organizations (IGOs), nongovernmental organizations (NGOs), and Indigenous Populations and Institutions (IPI) at all echelons.

Civil affairs forces provide both military and civilian leaders an increased situational understanding of the civil factors of the operational environment. The increased understanding through civil engagement can be used for future campaign planning, security cooperation initiatives, and identify available resources for contingency operations – all of which are mutually supportive efforts in MDO. Most importantly, civil engagement throughout the competition continuum assist commanders at all echelons with the careful integration of civilian partners and capabilities to ensure unity of effort and coordinated action.

The early integration of civil affairs forces at all echelons is necessary to determine what resources are available to support a commander’s civil-military operations (CMO). Enabling the sharing of information and resources with all partners contributes to a position of relative advantage during all phases of competition, armed conflict, and the return to competition. The early coordination minimizes civil-military friction and contributes to an economy of force to consolidate gains and to accomplish strategic objectives. The vignette below describes a recent civil-military dispute between United States Agency for International Development (USAID) and Department of Defense (DOD) during the liberation of Manbij, Syria, from the Islamic State in Iraq and al-Sham (ISIS) in 2016:

In August 2016, U.S. Special Operations Forces accompanied Syrian Democratic Forces as they liberated residents in Manbij, Syria, from the Islamic State in Iraq and al-Sham (ISIS).  Following the liberation, U.S. Civil Affairs personnel requested humanitarian assistance for the residents. When the United States Agency for International Development (USAID) reviewed the request, they disagreed on the requirement but did not have any personnel on the ground to substantiate their view.  An interagency disagreement ensued, and Department of Defense (DOD) spent $1.5M in Overseas Humanitarian Disaster Assistance and Civic Aid funds to provide cooking oil and other necessities to the residents of Manbij. Determined to prevent a repeat of the Manbij disconnect, interagency planners developed the Syria Transition Assistance Response Team - Forward (START-FWD).  In June 2017, this small team of U.S. civilian experts from the Department of State (DOS) and USAID co-deployed to Syria with the U.S. military.  This whole-of-government approach allowed each agency to work to their comparative advantage.  DOD provided access and security, while civilian agencies provided expertise and programming. With support from the Special Operations Joint Task Force in Syria, START-FWD guided civilian humanitarian assistance and stabilization efforts, engaged in diplomatic outreach to local authorities and non-governmental civilian counterparts, supported the civilian aspects of the Defeat-ISIS campaign, and oversaw DOS and USAID foreign assistance programs.

Although both USAID and DOD were supporting the Defeat-ISIS campaign in Syria, it is evident that the necessary trust and mutual partnership was not established early on. This situation represents the complexity of civil-military relations and how friction may escalate to become strategic issues at the highest levels of government. This vignette reinforces the need for early coordination with all stakeholders to ensure a seamless shift across the conflict continuum to maintain a national position advantage and optimal use of resource. 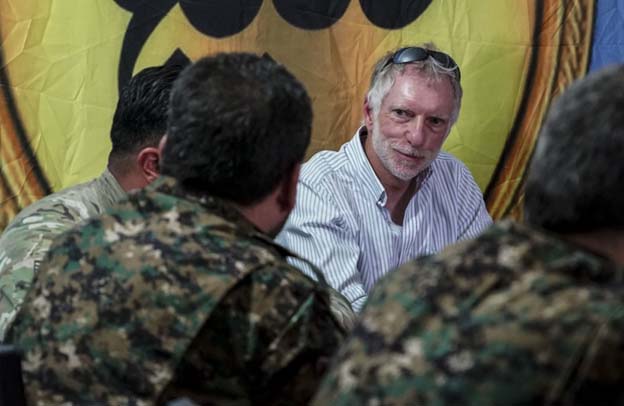 Larry Bartlett, Senior Advisor for the Syrian Transition Assistance Response Team, meets with members of the Manbij Military Council on the two-year anniversary of their liberation from ISIS in Manbij, Syria, August 9, 2018. The MMC and Bartlett's team discussed the safety and stability supported by ongoing independent, coordinated patrols with Turkish forces along the demarcation line. These patrols, outside the city of Manbij, are intended to prevent the reemergence of ISIS, deescalate the tensions between forces operating in the area and ensure all parties remain focused on the defeat of ISIS. (U.S. Air Force photo by Staff Sgt. Izabella Sullivan)

“Effectively expanding the competitive space requires combined actions with the U.S. interagency to employ all dimensions of national power. We will assist the efforts of the Departments of State, Treasury, Justice, Energy, Homeland Security, Commerce, USAID, as well as the Intelligence Community, law enforcement, and others to identify and build partnerships to address areas of economic, technological, and informational vulnerabilities.” 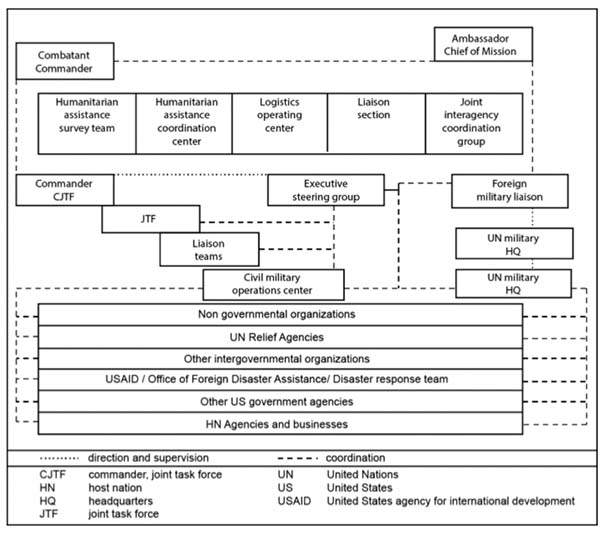 Example of a civil-military operations center (CMOC) as a means of coordination and collaboration with unified action partners as part of a joint task force. - Army Techniques Publication No. 5-0.6

As the Army moves to Multi-Domain Operations (MDO) across the competition continuum, it must establish formal civil-military coordination mechanisms to collaborate with JIM and other partners of the international community to carry out a “whole of government approach” and defend U.S. interests. Within the Army, civil affairs forces serve as the primary interface between JIM, IGOs, NGOs, and IPIs. At multiple echelons in the Army, a civil-military operations center (CMOC) is required to effectively coordinate and collaborate with all stakeholders. A CMOC provides the Army with a platform to share information and synchronize resources with various organizations external to DOD. Their value and utility were demonstrated time and again in the Iraq and Afghanistan wars.

It is important to note that military, civilian, and other stakeholders will naturally have their own objectives and interests. These diverse priorities make civil-military coordination a challenge and increases the risk of achieving unity of effort. However, understanding all stakeholders’ priorities early on can help reduce friction and establish a common understanding that enables collaboration. Early civil-military relations in competition is necessary and when needed, contributes to setting conditions for the rapid transition to armed conflict. Civil affairs forces are specifically trained and educated to understand and engage in such complex civil-military environment.

Compared to military-military engagements, civil engagement is often personality based and loaded with organizational biases. Civil affairs forces not only need to understand DOD interests but be prepared to engage with a diverse mix of civilian organizations with their own cultures and interests. Engaging with civilian counterparts requires civil affairs forces to manage expectations, align interests, and bring harmony to all activities to ensure everything is nested with the broader strategy. Hence, civil affairs forces can serve as strategic enablers by creating an economy of force with civilian partners for the Army as part of MDO across the conflict continuum.

“Our diplomats must be able to build and sustain relationships where U.S. interests are at stake. Face-to-face diplomacy cannot be replaced by technology. Relationships, developed over time, create trust and shared understanding that the United States calls upon when confronting security threats, responding to crises, and encouraging others to share the burden for tackling the world’s challenges. We must enable forward-deployed field work beyond the confines of diplomatic facilities, including partnering with military colleagues in conflict-affected states.”

In support of the National Security Strategy, the National Defense Strategy, and Multi-Domain Operations 2028, the Army must employ civil affairs forces early in the competition phase. Through civil engagement, civil affairs forces provide commanders, JIM partners, and other stakeholders with a platform to build a shared understanding and synchronize resources towards common objectives. The early integration of civil affairs forces either through a civil-military operations center or a staff directorate can help reduce civil-military friction and establish an increased understanding for all stakeholders to achieve unity of effort. Moreover, the Army benefits significantly with the integration of civil affairs forces at all echelons, from strategic to tactical, to synchronize activities across the competition continuum to achieve U.S. national objectives. This requires the Army examine civil affairs force structure and technological modernization to meet the demands of competition in the 21st century.

Recent history, for example in Syria, have demonstrated the military is unable to consolidate gains if it ignores the civil factors of the operational environment. The U.S. Army cannot succeed without integrating civilian partners, whether from U.S. interagency or local indigenous organizations, to bring coherent actions to bear across the competition continuum. We can only achieve strategic effects and win by operating together. Civil Affairs forces have proven over the past 18 years of war that they are an ideal conduit to ensure cooperation at all levels, in the most difficult circumstances. They can no longer be an afterthought or underinvested capability as the Army continues to be fixated on technology and lethality.

The views expressed are those of the author and do not reflect the official policy or position of the U.S. Army, Department of Defense, or the U.S. Government.