Love or hate the Centre of Gravity (COG) concept, it is here to stay.  Having witnessed Generals, handbags drawn, arguing for hours over a fantasy enemy’s COG, the anti-COG arguments hold some water.  Sir Lawrence Freedman has argued that the concept has little practical value in the modern world and should be replaced by a clear understanding of the position we wish to achieve.[i]  Arguments used by the counsel for the prosecution range from mistranslation of schwerpunkt to the changing nature of warfare.  On the other hand, there are several good reasons why it should remain within the NATO planners’ tool box, not least of which are paragraph headings in templates provided in the NATO Crisis Response System Manual and MC 133-4[ii] calling for our own and other actors’ COG. I know from first hand experience that the relevance of the paragraphs remain a mystery to many of our decision makers.  In addition, the relevance of the COG can be found within Russian/ Soviet doctrine and we can be sure that it is used to analyse our own COG, which we must protect.  The most important reason, and the one that I will lay out below, is that the path to identifying the COG offers insights to planners, realizing complex systems and providing the threads that will link our actions from the tactical to strategic levels: joining the dots.

The inspiration to explore different methods that would bring synergy to our plans came from an observed disconnect between strategic and operational level planning.  Strategic-military plans, by their nature, lack granularity so as to provide Operational Commanders the space in which to develop their own plans, free from political interference. However, I have never seen an operational level plan that I felt truly nests within the strategic commander’s vision; the threads are tenuous at best.  The explanation may be the common belief, at every level, that the superior headquarters is incompetent.  More likely is the absence of a methodology that unites our thinking.  I will propose that COG analysis offers a methodology that will meaningfully link the strategic, operational and tactical level plans.  It is not the only tool; however, used properly and given the correct level of effort, it will assist in deriving missions, objectives, decisive conditions, effects and actions: the Operational and Tactical Design.[iii]

COG identification remains one of the key tools for US military planners; US military academics and students are prolific writers when it comes to dissecting, analysing and supporting its utility.  Studies predominantly concentrate on the operational and tactical levels, drawing on examples from recent operations of its successful application and the disasters that ensue absent or incorrect COG identification.  The strategic level COG is elusive; writers from Sun Tzu onwards propose capitals, leaders, coalitions, national will, armies and so forth.  Whilst valid (only the brave criticize the likes of Sun Tzu), we would consider these elements to be part of a system that provides purpose and direction.[iv]

Providing a definition of the COG is an equally sticky topic and I will avoid entering the debate by endlessly quoting Clausewitz et al.  Instead, as this paper is more directed towards NATO planning, we will start with the NATO definition: the characteristics, capabilities, or localities from which a nation, an alliance, a military force or other grouping derives its freedom of action, physical strength, or will to fight.[v]  This is the methodology I recommend, which can be adapted at all levels of command.

The COG six-box grid as put forward by Dr Joe Strange is the standard tool employed by NATO and many other national militaries. 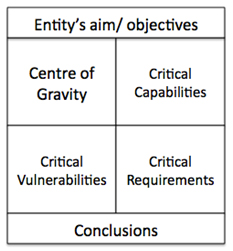 However, the methodology to fill in the boxes is left to intuition and is certainly absent from the Comprehensive Operations Planning Directive (COPD).[vi]  Neither does the COPD tell us how this analysis can be used throughout the planning process. I have found the six-step methodology proposed by Dr Dale Eikmeier[vii] to be logical and productive, especially in group working:

This will help us fill-in the grid and explain/ justify our findings.  The team of experts we draw together need to have already conducted a thorough analysis of the subject area, including systems and systemic analysis (perhaps more on this on another occasion).  The methodology was tested against NATO’s well-established COG (cohesion of the Alliance)[viii] and that of Russia,[ix] as defined by several prominent scholars (centralised/ polarised power).  Whilst both test cases fully supported the COGs as defined, the stepped analysis revealed important insights for plan development.

Taking our standard definition of strategy as the application of all instruments of power to achieve political objectives, it is vital to have experts in the team who can speak for all instruments.  DIME or DIMEFIL[x] provide a framework for the instruments of power; however, we must consider the “C” that came from PMEC.[xi]  I would recommend that initial analysis concentrate on Clausewitz’s trinity, the relationship between the political head, the military and the people.  This assists in contextualising the application of other instruments, especially when we attempt to predict where the COG might shift, following action against the COG.  Finally, we will collaborate with operational level planners so that they can contribute and are fully sighted on how we arrived at our conclusions.

Having established the aim (Step 1), the ways (Step 2 or Critical Capabilities) must be applied for all instruments of power.  This should provide a broad view of the strategy that is employed in achieving the aim; the COG (Step 3) can now be more accurately identified.  When completing the remaining steps, our focus will be on the strategic use of the military instrument of power, its requirements and vulnerabilities; this will assist us in understanding/ proposing our provisional strategic military objectives (handed down to us from above) and later, developing effects.  However, we should also consider linkages with the other instruments, informing non-military complimentary actions (which should return to us from our masters as non-military objectives that will guide other committees) and effects.  This will enrich SACEUR’s assessment, which by definition is not just a military assessment, informing his recommendation on the use of the military instrument and broader non-military interaction requirements.  Should we be required to provide a range of response options to cater for a sliding scale of ambition, our analysis will assist us in differentiating between objectives.  Ultimately, this analysis will assist in the derivation of SACEUR’s intent.

Within our conclusions section, we will speculate on the military aim within the grand strategy; this will be the start point for operational level COG analysis.

Another important aspect of this analysis is to pose the question: what will happen to the COG when it is attacked? Scholars who have analysed conflicts of recent times suggest strongly that destroying our enemy’s COG may not result in the desired outcome.  Whilst being highly subjective, we have a duty of care to inform on potential outcomes of our actions and take them into consideration in our planning.  This is also the reason why we say that we should periodically revisit COG analysis.

The Operational level has its start-point (Step 1) from the strategic level analysis. The remaining steps are completed focussing on military ways and means, and how this would be achieved by joint/ combined forces.  The output should inform multiple aspects of the operational design, not least of which would be decisive conditions, effects, joint action and subordinate commanders missions and objectives.  The operational design becomes the principal tool through which strategic planners confirm that the resource requirement can be fully justified, as well is other requirements such as rules of engagement.

Re-performing this analysis of our own COG at various intervals through the development of the operational design will ensure that our own COG will be sufficiently protected.

Should the crisis in hand be across a broad front that may result in the employment of multiple operational level HQs, the strategic level planners may need to break down the military aim in order to provide the correct focus for different operational level planning teams.

This is a repeat of the step above, except taking the aims of the joint/combined components as identified above.  For example, the Land component will concentrate on the aim of the adversary’s land component, whilst being aware from their doctrine of how it is used in the joint/ combined environment.

In summary, what we end-up with are lines of operation that are synergised from the lowest level upwards, contributing to achieving the strategic end state.  Our templates demand us to provide a COG and we should be explicit in why it is important.  Strategic COG analysis should be strategic and take into consideration all instruments of power.  The use of a common methodology to define the COG at all levels of command is a good start point; it may not be the best, but it will provide the linkage we need.   As with all military activity, practice may not make us perfect; however, practice with a disciplined approach will to enrich and validate our conclusions and, consequently, our decisions.  So, to finish with a gratuitous quote: This process cannot be taken lightly, since a faulty conclusion resulting from a poor or hasty analysis can have very serious consequences, such as the inability to achieve strategic and operational objectives at an acceptable cost.[xii]

It follows that we should take our approach to dealing with the COG, whether it’s attack or defend, equally seriously.

[iii] AJP-01(D) dated 2010: operational design is both a process and a product. In general, the ‘process’ of operational design, ‘frames the problem, and then develops and refines a commander’s operational ideas – the vision of how the campaign will unfold – to provide detailed and actionable plans.

[vi] The COPD articulates the operations planning process (OPP) for the NATO strategic and operational levels, in support of the NATO Crisis Management Process (NCMP), to facilitate a collaborative approach to planning.

Ian Kippen is a retired British Army Officer now working as an independent consultant. He has held Staff Officer positions at SHAPE, JFC Brunssum and HQ ARRC as well as the MA position at UN Missions to Sierra Leone and DRC and held a staff position with NTM-A.