SWJ Editor’s Note: The Army’s CA Proponent is deliberately pursuing a Force Modernization Assessment (FMA) under the newly established Army Futures Command that will identify required capabilities for the future operating environment, capability gaps, and the right solutions to eliminate the identified gaps.  While Civil Affairs Forces will continue to have a significant role in competition, this essay is intentionally scoped to focus on CA's role in Large Scale Combat Operations.

“The Army must be manned, equipped, and trained to operate across the range of military operations, starting with the most lethal conditions first - large-scale combat against a regional peer”1

If you think Civil Affairs (CA) has no role in lethality, you may be a part of the problem. As the reality of armed conflict against a near-peer adversary becomes increasingly plausible, the Army is rapidly modernizing its force to succeed in Multi-Domain Operations (MDO). In these critical times, CA must change to fulfill an essential role in the multi-domain solution. With responsibilities throughout the Competition Continuum2, the total CA force must prepare itself for the worst-case scenario — Large Scale Combat Operations (LSCO). Competition-centric approaches are insufficient in armed conflict against a near-peer adversary willing and capable of employing hybrid warfare.3 To remain relevant in the future operational environment, CA must counter enemy hybrid warfare in the expanded battlefield, specifically in operational and tactical support areas, 4 as part of an integrated security team through civil reconnaissance, civil network analysis, and civil network development. 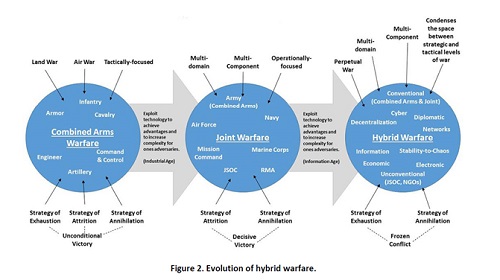 Why Land Component Commanders Need CA in Their MDO Formations

During the last two decades, near-peer adversaries recognized that investing in offensive air and sea capabilities would be insufficient to achieve overmatch against the U.S. in LSCO.  As a result, they invested heavily in hybrid warfare and anti-access and area denial system capabilities to gain competitive advantages against U.S. vulnerabilities.6 Civil Affairs capabilities equip them to be the Army’s weapon of choice to counter hybrid warfare threats in support areas. Today’s near-peer adversaries possess the will and ability to weaponize civil capabilities. The effects of hybrid warfare are often misperceived as force protection threats, obstacles, and political challenges. However, hybrid warfare’s efficacy lies in the combination of multiple layers of irregular, economic, information, socio-political, and cyber warfare. As the Army’s only soldiers specially trained to shape human geography, CA capabilities enable them to detect, understand, and counter hybrid warfare threats.

Human Geography: The study of the interrelationships between people, place, and environment, and how these vary spatially and temporally across and between locations.7

When Russia invaded Crimea in 2014, it exploited Ukraine’s civil vulnerabilities by conducting unconventional and information warfare in the physical, virtual, and cognitive spaces. Russia’s military invasion in the physical space was enhanced by economic aid, employment of criminal networks, and arming of special purpose forces (SPF). In the virtual and cognitive spaces, maneuvers were elusive. Political proxies, propaganda, recruiting campaigns enabled by social media, diplomatic pressure, and diaspora movements were employed to advance Moscow’s objectives. Russia’s execution of hybrid warfare set the conditions for its consolidation of gains by destabilizing the critical capabilities of the Ukrainian government and military to secure ground, air, and sea lines of communication (LOCs). U.S. forces should expect to see a continuation of these threat activities as they execute MDO.

Friendly forces responsible for operational and tactical support areas must be capable of defeating hybrid warfare threats. In an effort to maintain the initiative, divisions, corps, and field armies have to bypass significant population centers and pockets of enemy forces as they concentrate combat power on their highest priority conventional threats. With the enemy using civilization for cover and concealment, CA not only reduces a significant blind spot for future multi-domain formations, but provides a capability to fully consolidate gains and secure victory in those areas.

“Planning and execution to consolidate gains must account for all potential means of enemy resistance and be approached as a form of exploitation and pursuit if we want to create enduring outcomes. It is critical to avoid giving enemies the time to reorganize for a different kind of fight.”8

Integrated security is the best approach to safeguard support areas and consolidate gains. Failing to disassemble, dismember, and neutralize hybrid warfare threats against support areas provides the enemy time and space to regain the initiative. The U.S. Army Functional Concept for Maneuver Support: 2020-2040 introduces the concept of integrated security as, “the synchronization and employment of capabilities at echelon in all domains to develop situational understanding continually, protect the force, and create a secure environment.”9

Civil Affairs as an Intelligence, Surveillance, and Reconnaissance (ISR) Platform

Civil Affairs is the Land Component Commander’s premier capability for tactical reconnaissance of the civil component of the battlefield. Even the most technologically advanced ISR platforms have limitations. While they excel at gathering data of the physical terrain against conventional enemy threats, they are not designed to detect things like human relationships, power dynamics, cultural factors, populace support, and motivations. FM 3-57, Civil Affairs Operations, describes civil reconnaissance (CR) as “a targeted, planned, and coordinated observation and evaluation of specific civil aspects of the environment.”10Correctly planned and executed, CR can provide significant insight to illuminate civil elements of a hybrid warfare threat network. In 2010-2011, a CA team, which was deployed to Yemen to conduct CR against specific civil information requirements, identified precursors to the overthrow of the Yemeni Government. Using face-to-face and social media engagements with networks it had developed on the ground and cyberspace, the team tracked the mobilization of anti-government militants, confirmed its estimates, and provided situational understanding to Special Operations Command Central-Forward.11Future CA forces must leverage new technologies to conduct CR and surveillance in dense urban terrain, hostile environments, and cyberspace. Through CR, CA teams provide evaluated civil data that enable commanders to achieve situational understanding, to include the enemy’s manipulation of civil capabilities.

“It takes networks to fight networks, much as in previous wars it has taken tanks to fight tanks.”13

In order to win in in a fluid operational environment, future CA forces must be tactically lethal against enemy hybrid warfare targets. They must be fully prepared to plan, participate in, or conduct operations such as patrols, cordon and searches, raids, or other engagements against enemy SOF or SPF. They must be able to maneuver technically within cyberspace and the information environment to provide ground force commanders with civil network analysis and employment options. 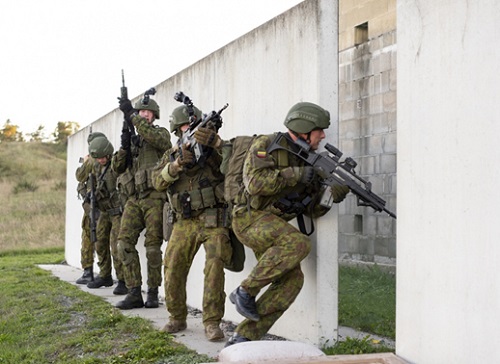 Can Civil Affairs Deliver? The Way Ahead

To meet the challenges of LSCO, the total CA force must modernize its force. Based on past experiences with CA, naysayers may argue, with some accuracy, that the current CA force has neither the capability nor the capacity to counter the hybrid warfare threat in LSCO. In reality, the current CA force would give its best effort to adapt and overcome with mixed results. The calibration of the CA force’s technical and tactical potential makes a lethal CA capability for Land Component Commanders attainable.

Current CA structure, doctrine, equipment, and training are inadequate to combat future near-peer threats. The current CA force was designed and rapidly reorganized to support the Army’s modularity concept of the early 2000s. Civil Affairs grew to meet the increasing requirements of counterinsurgency and stability operations. Wargames and training exercises continue to prevent CA participants from demonstrating their capabilities in LSCO. As the likelihood of armed conflict in dense urban terrain increases,16 wargames must stop “assuming away” the civil component. This only perpetuates the Army’s challenge to fully understand how near-peer adversaries will use hybrid warfare at the operational and tactical levels and to develop the requisite capabilities to defeat them.

The CA Proponent is deliberately pursuing a Force Modernization Assessment (FMA) under the newly established Army Futures Command that will identify required capabilities for the future operating environment, capability gaps, and the right solutions to eliminate the identified gaps. Critical to success in the upcoming FMA will be to maintain unity of effort among all the stakeholders. Simultaneously, the CA Proponent will actively engage with the U.S. Army Centers of Excellence for the integration of CA capabilities into the Army’s warfighting functions. Meanwhile, CA forces must embrace their required role in LSCO, continue to sharpen their capabilities as the Army’s masters of human geography, and begin to lead the effort of countering the hybrid warfare threat that will be central to the adversary’s strategic approach. Beginning with an honest assessment of current CA capabilities, the CA force must transform its “soccer balls and projects” identity to rectify external misperceptions, while pursuing deliberate force modernization to produce lethal Soldiers —ready for the future fight.

The views expressed are those of the authors and do not reflect the official policy or position of the U.S. Army, Department of Defense, or the U.S. Government.

Captain (P) Linda K. Chung, U.S. Army, currently serves as a Concept Development Officer at Civil Affairs Proponent. She received her commission as an Engineer Officer and B.S. in Economics from the United States Military Academy at West Point in 2008. Since 2013, Chung has served as a CA team leader, Battalion Plans Officer, HHC Commander, and Training with Industry Fellow at the Research Triangle Institute-International Development Group. She has deployed to Afghanistan and Nepal, in addition to supporting multiple Combined Joint Chiefs of Staff exercises in Korea.

Lieutenant Colonel Thurman “Scott” Dickerson, U.S. Army, currently serves as the Chief of Concept Development at CA Proponent. He began his career as an armor crewman in 1996 and was commissioned as a Medical Service Corps officer in 2000 from Radford University.   He holds a M.S. in Criminal Justice from Radford University and a M.A. in Strategic Security Studies from National Defense University. Since 2008, Dickerson has served in diverse conventional and special operations command and staff positions within CA, to include ARCENT CMO Officer Forward, Brigade Executive Officer, and XVIII Airborne Corps Deputy G9. He has deployed to Iraq and Afghanistan multiple times, Qatar, Yemen, and served a one year hardship tour in Kuwait.

Colonel Jay Liddick, U.S. Army, currently serves as the Civil Affairs Commandant.  He received his commission as an Engineer Officer from Indiana University of Pennsylvania in 1995, and holds a Masters of Strategic Studies from the U.S. Army War College and a M.A. degree in International Relations from Webster University.  Since 2004, Liddick has served in diverse command and staff positions within CA, to include Human Resources Command CA Branch Chief, Deputy Brigade Commander, and the CA Advisor/Irregular Warfare Integrator at the U.S. Army Peace Keeping and Stability Operations Institute.  He has deployed to the Dominican Republic, Bosnia, Iraq, Colombia, Afghanistan, and Indonesia, in addition to a one year tour in Honduras.