There is a global trend toward urbanization reflected in urban migration and urban density that is resulting in rise of megacities. According to the 2016 World Cities Report, “large cities are defined as having between 5 and 10 million inhabitants and megacities as having 10 million or more inhabitants.”[i] As of 2018, over half the world now lives in Dense Urban Areas (DUAs). DUAs are exactly what the label suggests; areas of high human population density that may or may not achieve megacity levels but share urban morphology characteristics such as GDP levels per capita, rate of demographic growth, and historical origins. Collectively, these DUAs account for half of the global population according to a recent study conducted by the United Nations Habitat group on urbanization and development. Despite the rapid emergence of megacities and DUAs, there is no Army center of excellence focused on researching the complexities of operating in either. Although there have been various Department of Defense (DOD) sponsored initiatives focused on megacities and DUAs[ii], there exists no military doctrine specific to either, and no dedicated curriculum to train organizations that will operate in both. 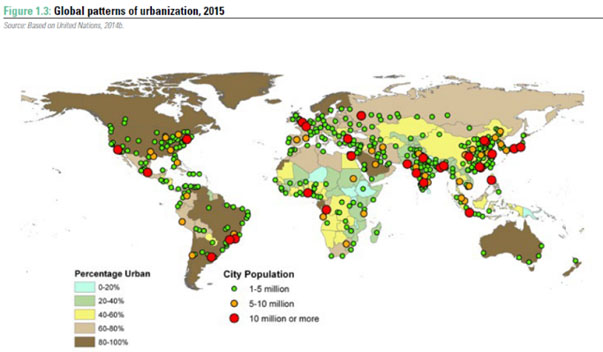 Figure 1 depicts the location of current DUAs and megacities. These same DUAs are forecast to grow, not diminish, in size and population, yielding vastly increased socio-cultural, spatial, and strategic complexity. This trend poses unique challenges to the increasing breadth of operations faced by the United States military, federal agencies, NGOs, and industry alike. Dense urbanization impacts a variety of humanitarian, industrial, and security operations; all of which occur in urban areas that may have compromised, underdeveloped, or aging infrastructure, alongside persistent political challenges. Operating in DUAs will involve concerns for minimizing collateral damage, as civilians could become unintended casualties and even unwilling assets for a foe that has decided the best course of action is to sequester themselves with hostages. Keep in mind our foes have access to the same commercial off the shelf (COTS) products that the military and our federal and state agencies have, which enhances the difficulty and complexity of cloaking operations and makes disinformation campaigns challenging. The need to understand these factors in an integrated sense, and to make decisions that inform stakeholders of the humanitarian, industrial, and security sectors creates an opportunity to increase knowledge and awareness of a topic that is trans-disciplinary in nature.  The study of DUAs must include contextual subjects such as the history of city development, governance systems and approaches, urban geography, as well as developing the models and simulations that can guide decision-makers.

Not surprisingly, at the recent Multi-Domain Battle (MDB) in Megacities Conference hosted by U.S. Army Training and Doctrine Command (TRADOC) G-2, a panel of eminent U.S. and Australian Army generals stressed the aforementioned concerns. They each exhorted the audience to continue proselytizing and persuading others to recognize the importance of devoting resources to the challenge of operating in an environment that is growing more complex by the day. The SSG Cohort III Megacities report recommended “establishing an urban studies center, development of new urban approaches as an evolution of existing doctrine, and institutionalizing the already growing megacities community of interest to help guide Army efforts in adapting itself to megacities.”[iii] By furthering focused research on DUAs through a Megacities Center of Excellence (COE), and developing curriculum focused on educating students on the complexity of DUAs; the ASURE-ASU team are assisting DOD in implementing these recommendations. As the applied research laboratory for Arizona State University (ASU), Arizona State University Research Enterprise (ASURE), connects its partners, industry, and Federal sponsors with the unsurpassed intellectual resources of America’s fastest growing research university. This is why ASURE and ASU have devoted themselves to furthering research that builds a foundation of knowledge capable of birthing and supporting initiatives useful to a community of stakeholders who need to operate safely and effectively in DUAs.

ASURE and ASU have adopted a two-prong approach. First, the team is developing a prototype modelling and visualization decision support capability intended to quickly deconflict the “noise” inherent to data aggregating engines, and gleam only the most credible and useful of information. Second, ASURE is assisting ASU to develop a focused curriculum and program of study for DUAs.

To illustrate ASURE’s goals in the first approach, consider the following example. During a crisis brought about by a sudden natural disaster, humanitarian operations in DUAs and megacities will rely on understanding the physical, social, economic, and other conditions therein. Those seeking to bring stability and security to millions of these urban areas’ residents will need to have access to disparate, unformatted data and the means of comprehending this data. There is a fundamental requirement to determine what the country’s military and other government departments/agencies require in the way of data, its management, and how they can cultivate understanding of resulting products once these have been ascertained. Based upon joint discussions with TRADOC, ASURE and ASU’s Decision Theatre are developing a prototype model and visualization decision-support capability that uses artificial intelligence to rapidly mine disaggregated data.

Having determined what data a coalition of military and civilian organizations would need to conduct successful operations in a megacity or DUA, the Decision Theatre is utilizing their Complex System Framework (CSF) to develop an initial modeling and visualization capability. This capability will enable a Joint Task Force (JTF) Commander to derive a common operating picture from a specific set of social-cultural urban variables that, once integrated, enable Course of Action (COA) decision-making. While the outcome of this specific effort is focused on developing a COA toolkit for a JTF Commander, the model could support other stakeholders with vested interest in conducting stability operations.

In pursuit of the second approach, ASURE recently hosted a DUA Curriculum Workshop and invited representatives from the U.S. military, U.S. Army TRADOC, and federal and state agencies such as the Department of Emergency and Military Affairs (DEMA) to come and directly share their recommendations for curriculum content with ASU faculty. We recognize that the only way to develop a sound program that will meet the needs of the stakeholder community, and stand the test of time, is to bring together a diverse group of subject matter experts and stakeholders that can debate frameworks, the merits of incorporating guest speakers, and pairing subject matter experts with students to give students an opportunity to apply knowledge learned to real-world situations.

The objective of developing a program of study devoted exclusively to the study and education of DUAs is threefold:

The DUA Curriculum Workshop was organized into several round tables, each representing a key research area and led by a subject matter expert. The research areas were Sustainability, Infrastructure, Population, Environment and Economics; these having been selected as the discussion starting point for the workshop as they were focal areas of research during the Mad Scientists Megacities Conference presented by TRADOC and hosted by ASU in 2015. Conducted in a breakout session format, workshop participants rotated from one table to the next, sharing their DUA curricula recommendations on the table’s topic with the discussion faculty leader and fellow conference participants.

The results of the round table discussions underscore the interdependencies of the subjects and the need for a transdisciplinary approach whereby a variety of academic disciplines collaboratively tackle research. For instance, economics does not happen in a vacuum, therefore it was embedded within other round table discussions. Population issues are coupled to the economic drivers that motivate people to leave rural communities in favor of congested, yet employment opportunity-rich cities. Similarly, infrastructure, environmental issues, and sustainability are all occupants of one space, the science of DUA and megacities, and must be deliberated as an ensemble. Conference participants encouraged faculty to include theoretical frameworks to ground students on the vocabulary, analytical tools, and processes that heretofore have been used to develop city case studies. The case study methodology was widely viewed as the best teaching practicum for students to learn how to use a transdisciplinary approach when examining highly complex systems. Additionally, a good number of participants recommended developing stakeholder partnerships that could be leveraged for guest speaker events. Having experts whose occupation is delivering real-world services or solutions within DUA and megacities enhances student learning by relating concepts studied in a classroom setting to tangible experiences the guest speaker shares. Finally, ASURE compiled all of the specific recommendations shared during the conference were noted into an After Action Report (AAR). This AAR serves as a blueprint for all of the ASU Schools contributing content to the program, to design curricula that will genuinely meet the needs of stakeholders.

In conclusion, when urban overcrowding grows in scale, the consequence of not understanding the 2nd and 3rd order effects of DUAs will be both catastrophic – from a human perspective – and very costly. Feelings of remorse do nothing to ameliorate the aftermath of unfortunate events. Spending more on research to mitigate, or even prevent, the impact of a catastrophe regardless the origin, and any resultant human suffering before the event occurs, will reduce costs associated with intervention or recovery operations. ASU is the nexus of a new approach to Urban Science; an advanced research model that leans forward and involves stakeholders while being responsive to their needs, yet is flexible, easy to access, and completely relevant to a variety of learners. The two-pronged approach described in this article demonstrates the University’s commitment to achieving the goals laid out in the SSG Cohort III Megacities report. The next step for ASURE is to work with ASU to identify existing courses that either meet these needs or can be modified to include the specific recommendations.

[ii] At the request of the Chief of Staff of the Army, in 2014 the Strategic Studies Group (SSG) Cohort III Megacities Concept Team developed “Megacities and the United States Army: Replicating the Home Field Advantage”. In 2016, U.S. Army TRADOC G-2 Mad Scientist group co-sponsored a conference and after action report dealing with their megacities and DUAs data collection and analysis efforts.

Claudia ElDib is a logistics program manager at ASURE and a SOLE Demonstrated Master Logistician. She focuses on identifying research at ASU that can be rapidly developed into solutions that address defense and security challenges. She is also a PhD Candidate in the History program at ASU studying the intersection of military history, technology, and dense urban areas. In her prior life, she served as a Sergeant in the United States Marine Corps. Currently at ASURE, she is working to develop a new Dense Urban Area Studies program at Arizona State University in partnership with the School of Politics and Global Studies and the School of Geographical Sciences and Urban Planning.

Injustice is not the price…

Injustice is not the price we have to pay for living in the city. We must have confidence that change with elite writing services https://writer-elite.com/ is possible and that everything is in our hands. That is why we must return to the politics of everyday life - to find the path that leads us forward.

An intriguing discussion is…

An intriguing discussion is worth a comment. I think that you ought to publish more on this subject matter, it might not be a taboo matter but generally, people don't discuss these issues.

Urbanisation is on the rise…

Urbanisation is on the rise these days. People are shifting from villages to urban areas and, more specifically, to cities. It is because cities offer people many benefits. These benefits include improved sanitation and lifestyle. According to research, over half of the world population lives in dense population areas. assignment writing service

Arizona State University has developed a dense roadmap to study Urban areas as a center of excellence for students. The https://www.brillassignment.co.uk/write-my-essay/ run a global trend toward urbanization reflected in urban migration.