Book Review: The Dust of Kandahar

Book Review: The Dust of Kandahar 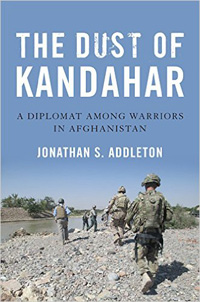 Ambassador Jonathan Addleton wrote The Dust of Kandahar “for everyone who served there.”  But it should also be read by everyone who has ever been involved in counterinsurgency operations anywhere, or in any kind of irregular warfare involving civil-military operations.

Although known by his colleagues as an exceptional strategist in economic development, Addleton’s book isn’t about strategic development.  Rather it is a chronological compilation of excerpts from his daily journal as U.S. Embassy Kabul’s Senior Civilian Representative to Regional Command-South--arguably the most dangerous, complex and kinetic geography in the Afghan campaign.

Addleton served in that position from August 2012 to August 2013, and describes his job as “overseeing civilian relations” in Kandahar, Zabul, Uruzgan and Tirin Kot provinces.  But the job was a lot more complicated than that.  It involved constant engagement with NATO military forces, and with a long string of governors, tribal leaders, judges, lawyers, mullahs, merchants, human rights activists, security officials and others.

The book ranges from the poignant to the cerebral to the terrifying and back again.

Addleton has a unique background, even by U.S. Foreign Service standards.  Born in Pakistan in 1957 to Baptist missionary parents, he grew up in northern Pakistan where he attended Christian schools.  In an earlier book, Some Far and Distant Place, he recounts his upbringing there during happier times, including a long overland journey that he took as a teenager across Afghanistan.

Addleton went on to earn a Bachelor’s degree in journalism from Northwestern, and MA and Ph.D degrees from the Fletcher School of Law and Diplomacy.  He joined the U.S. Foreign Service in 1984, and served overseas for the U.S. Agency for International Development in Jordan, Kazakhstan, Yemen, South Africa, Mongolia, Cambodia, Brussels, Afghanistan and India.  But he had never worked hand-in-glove with the military until his assignment as SCR in Kandahar, which he began at the age of 55.

Of special interest in The Dust of Kandahar are his straightforward accounts of the scores of meetings that he held with the power brokers of southern Afghanistan.  Also, for the counterinsurgent, his conversations with senior Pakistanis and his views on the ‘Pakistani narrative’ offer a unique and well-informed point of view into the mindset and motives of those who exacerbate the war from across the Durand Line.  Having grown up in Pakistan, and speaking both Hindi and Urdu, Addleton isn’t living under any illusions about Pakistan’s role in the conflict.

Also of special interest are his observations about the U.S. military leaders who were in charge during his time there, the Ambassadors who oversaw the diplomatic element of the war, and the battles he waged with the State Department public affairs offices that managed the flow and content of communications from Kandahar.

At his most poignant, Addleton describes in detail the April 2013 double IED attack on him and his entourage in Zabul province that killed his translator, fellow Foreign Service Officer Anne Smedinghoff, and three American military specialists who were part of his guard detail.  He alone walked away from it, physically unhurt but changed for life as only a survivor can be who has lost those close to him in war.

I’m neither an objective nor a dispassionate reviewer of the Dust of Kandahar.  Addleton brought me to Mongolia as his deputy when he ran the USAID mission there in 2003.  We served closely for a couple of years, at perhaps the most far-flung outpost of the U.S. government.  We traveled together overland in Toyota Land Cruisers, often for weeks at a time, to some of the most remote and inaccessible locations on the planet.  Many of those destinations were hundreds of miles from the nearest paved road, and some continued far beyond the end of the last motorized track.

After moving on from Mongolia to become Mission Director in Cambodia, and then USAID’s Representative to the European Union in Brussels, Jonathan returned to Mongolia as the U.S. Ambassador—one of the elite few who are ever tapped for an Ambassadorship out of USAID.  I worked under him again there for a while before I left to run the Development Directorate at ISAF headquarters in 2010.

We met up again in 2011 when Embassy Kabul brought him in for consultations.  Jonathan took advantage of the visit to bolster the spirits of the Mongolian soldiers deployed there, speaking to them in their own native language.  It was the first time Mongolians had been to Afghanistan since Genghis Khan overran it in the early 13th century.

Addleton’s upbringing in Pakistan, along with thirty years of international development and diplomatic experience, give him a truly unique perspective on the Afghan campaign as it was pursued during the critical drawdown period of 2012-2013.  In the Dust of Kandahar we see the drip-drip-drip of how President Obama’s policy of ‘ending the war by 2014’ played out on the ground with American military, diplomatic and development units, with our allies in arms, with the Afghans, and with the Taliban.

The Dust of Kandahar is fundamentally unlike any other book written on the Afghan campaign.  For students of irregular warfare, it offers a perspective on that time and place from a deeply seasoned and brilliant diplomat, assigned to one of the most difficult and dangerous civilian positions in the world.

History is what happens.  All else is just approximation.  With no plot, no thesis, no agenda, and no narrative, The Dust of Kandahar is raw military-diplomatic history at its best.

Categories: The Dust of Kandahar: A Diplomat Among Warriors in Afghanistan

Jeff Goodson is a retired U.S. Foreign Service Officer.  In twenty-nine years with the U.S. Agency for International Development, he worked on the ground in 49 countries in Africa, Asia, Latin America, Eastern Europe and the Middle East.  He was Chief of Staff at USAID/Afghanistan from 2006-2007, and Director of Development at ISAF HQ in Kabul from 2010-2012 under General David Petraeus and General John Allen.  The opinions expressed are his alone.