Book Review: Playing with Fire: Pakistan at War with Itself 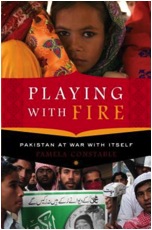 Pamela Constable is honest with her readers about the purpose of Playing With Fire. It is her “attempt to explain to Western readers what Pakistani society is like today.” She accomplishes this stated mission with ease. However, though she admits that the focus of the book is not the war on terror or the troubled relationship between Pakistan and the United States, the omission of these key topics leaves the reader feeling somewhat cheated. This otherwise excellent book could have been much better if Constable had attempted to address the issues which concern her target audience the most.

Pamela Constable has covered Pakistan as an editor for The Washington Post since 1998. She traveled across the country interviewing students, religious clerics, politicians, military officers, and ordinary Pakistanis. Her deep understanding of the inner workings of Pakistan and the way its people think is clear. She intertwines the stories of individual Pakistanis she met in her travels into her broader historical account.

Constable explains the many problems and contradictions which plague Pakistani society. The civilian leaders of Pakistan are weak and corrupt. This has led to multiple military takeovers and dictatorships. As the most respected institution in the country, the army wields enormous power in national politics and business. Despite widespread respect for the army, it is also feared and resented for its past incursions on democracy. For a country that was founded as a revolutionary experiment in Muslim democracy, the people have remarkably little say in their government. In fact, Constable argues that Pakistan is a “fake” democracy. The Pakistani people are powerless and have no say in politics. Most of the population lives in poverty under a feudalistic system which exploits the labor of the many for the benefit of a few. Widespread disenfranchisement and poverty have led many young Pakistanis into the clutches of radical Islamic terrorist groups.

The appeal of radical Islam in Pakistan is more complex than commonly believed. Most Muslims do not support the brutal punishments enforced by the Taliban or the suicide bombings carried out by Al Qaeda and other groups. Pakistani Muslims do, however, desire the Islamic justice which the Taliban promise. Pakistan’s courts are inefficient and corrupt. The man who pays the most in bribes or knows the more powerful political figure will win a court case, regardless of the facts. Petty disputes can drag on for 20 years. Though Pakistanis do not often understand what Taliban justice really means, there is obvious appeal in a system which promises to be fair and expedient. The movement in favor of radical Islam has been bolstered in recent years by what Pakistanis view as an attack on their religion. Ever since the attacks of September 11, 2001, Pakistanis have grown increasingly defensive of Islam. They believe that “the Jews” carried out the 9/11 attacks in order to discredit Islam. Pakistanis see the American wars in Afghanistan and Iraq as well as the drone strikes in their own country as proof that the U.S. is waging a war against Muslims. Constable’s explanation of this problem is both illuminating and chilling.

Constable is not afraid to expose the deep-seated religious intolerance in Pakistan. Blasphemy laws are still in place which are easily used against non-Muslims by those wishing to settle personal quarrels. The governor of Punjab Province, Salman Taseer, was assassinated in January 2011 for speaking out against blasphemy laws and the unjust imprisonment of a Christian woman. His murderer was hailed by the Pakistani public as a religious hero, while Taseer was treated as an infidel who deserved to die.

The treatment of women in Pakistan is even more concerning. Honor killings are commonplace, even among the wealthy urban elite, and the killers are rarely punished. Women are often abused for the crimes of their relatives. One young woman was thrown in jail for adultery because she had been gang raped in retaliation for her brother’s affair. Most women are illiterate, and the pressures of society force many families to keep their daughters away from school. Constable describes the plight of one family who wished to send their daughters to school but decided it was not in their best interests. If a boy at school insulted the girls, the men of the family would be forced to retaliate violently to defend their honor, so it was easier to just keep the girls at home. These attitudes allow the oppression and marginalization of women in Pakistan to continue.

In addition to the previously noted sidestepping of important issues such as the U.S.-Pakistan relationship, Constable makes a few forgivable, yet noteworthy mistakes. Though the book mostly succeeds in being accessible to Westerners with little knowledge of Pakistan, the non-chronological structure of the book can be frustrating at times. Each chapter covers a different aspect of Pakistani society which Constable seeks to explain. Though this format works well for developing themes, it can be confusing for readers who have limited prior understanding of Pakistan. Events, people, and groups are sometimes referred to in one chapter but are not fully explained until a later chapter. This can be hard to follow as the significance of these people, events, and groups can be unclear without background knowledge. Constable should also have provided readers with a map and timeline to better facilitate comprehension.

Despite these shortcomings, Playing With Fire is a great first read for anyone seeking to better understand a country which will be vital to U.S. national security for years to come. It leaves the reader with more questions than answers, yet it provides a great background for further study. Pakistan may be the most serious threat to the United States, and responsible Americans should learn as much as they can about this troubled country and its people.

Daniel Jacquier is a Midshipman at the United States Naval Academy majoring in history.