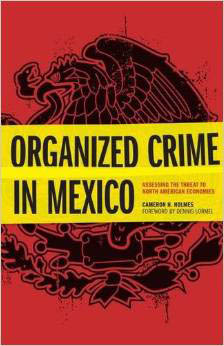 On August 25, 2011, several vehicles carrying armed men associated with Mexico’s Los Zetas cartel arrived at the Casino Royale San Jerónimo in Monterrey, Mexico intending to intimidate the casino owners into paying extortion fees. After shooting at people inside, the gunmen doused the casino with gasoline and set it ablaze. This attack left 52 persons dead and is considered one of the deadliest attacks by a cartel in the history of Monterrey. The violence committed by Mexican criminal enterprises is not limited to members or representatives of rival cartels; they target law enforcement, government officials, and increasingly, people in the community.

Cameron H. Holmes, in Organized Crime in Mexico: Assessing the Threat to North American Economies, comprehensively explores the sources of power for these criminal enterprises, examines how their diversification endangers the Mexican and United States economies, and discusses novel long-term countermeasures to curtail what can only be called a severe crisis. Holmes indicates that the United States is not immune to this dilemma either, and that the rising dominance of Mexican criminal enterprises may threaten the economic and national security of all of North America.

Organized Crime in Mexico begins with a foreword from former FBI Special Agent Dennis Lormel—past Chief of the FBI’s Financial Crimes Program, followed by an informative preface, list of abbreviations, and then moves into the introduction. Chapter one is an overview of where criminal enterprises get their power. Chapters two and three begin delving into some of Holmes’ analytical discussions on diversification and alternate possible futures beside the bleak one seemingly ahead. His main argument is found in chapter four, where he hammers out the requirements for “fundamental” change. In the remaining chapters five, six, and seven, Holmes provides his countermeasure strategy, including long- and short-term goals and fixes. The book culminates with a brief conclusion, notes, and an index.

Holmes’ unique academic and practical background informed his analyses. A graduate of Harvard University and Georgetown, he worked as a police officer in Portland, Oregon, as Chief of the Financial Remedies Section of the Arizona Attorney General’s Office, and as Director of the Southwest Border Anti-Money Laundering Alliance. He also served as Associate Counsel to the Senate Iran-Contra Committee. In his book, he supports his analyses and countermeasure recommendations through critical discussions, historical overviews, and his own practical experiences in the field. The references Holmes used to write his book included newspaper articles, official reports, academic research, and interviews. Although Holmes passed away in 2013, his achievements and expertise are embedded in this book.

Highlighting how Mexican criminal enterprises threaten the economy and democracy of North America, he illuminates how this threat can ultimately erode democracy, threaten the safety of the people, and critically undermine the economic viability of an entire region. The looming total degradation of the Mexican government’s legitimacy would prevent Mexican officials from having any ability to control criminal enterprises whatsoever, leaving them impotent to prevent illicit activities or protect the civil liberties of the Mexican people. According to Holmes, if these outlaw organizations continue to gain authority, the democratic freedom of Mexico will be in peril.

Mexican criminal enterprises also threaten the international community, having expanded their operations from drug trafficking to kidnapping, extorting people and businesses, counterfeiting goods, and large-scale stealing of cargo and petroleum. They are networking with international criminal and terrorist organizations, and are conspiring with Chinese criminal organizations to obtain resources for producing illicit narcotics. They also secure counterfeit items from China, which enable the laundering of U.S. dollars into Mexico.

Efforts by law enforcement and military officials in Mexico to diminish these enterprises’ power have proven to be inefficient and ineffective. Some scholars, politicians, and political commentators have advocated for the legalization of marijuana in the United States or closing the border as innovative solutions for resolving the illicit activities of the criminal enterprises.

Holmes argues that the current strategies and most common proposals for eradicating these organizations are inadequate. Instead, a successful path forward for the United States and Mexico against these criminal enterprises requires a joint proposal. He notes that such a way forward would require intensive collaboration between the two countries, including improved investigation and prosecution of criminal enterprise members, and the elimination of the financial resources of the criminal enterprises. Holmes provides an extensive list of guidelines and possible countermeasures:

Even though these recommendations are applicable and achievable, there are a few key deficiencies in Holmes’ assertions. For one, in order for these plans to be effective, there would need to be long-term funding and support for them. Holmes fails to provide any explanation of viable funding sources. Another factor crucial to the formula is that corruption in Mexico is a systemic problem, which may hinder the implementation of Holmes’ recommendations. The ability to eradicate government corruption in Mexico will take substantial efforts. Additionally, it will be difficult to diminish corruption in Mexico when law enforcement and military officials have as demanding of a job as they do, yet are given low compensation, and are not as well equipped as the Mexican criminal enterprises. The ability to recruit top candidates that are able to resist corruption may be hindered by the lack of proper compensation and the legitimate fear of death or harm from criminal enterprises.

There is also noticeably a lack of visualizations and graphics in the book. This book could benefit from relevant photographs, tables, figures, and summary tables of Holmes’ recommendations to help illustrate his contentions. Holmes provides many admirable recommendations that could have been placed in summary tables for individuals that may not have the time to thoroughly read the chapters, or who may want to later refer back to them as a quick reference.

At first glance, the title of the book may be intimidating for readers who do not have a firm foundation in economics or the intricacies of criminal enterprises in Mexico. One might assume this book is full of convoluted economics theories and formulas or esoteric terms. Instead, Holmes has written the book such that it is easily understandable and informative for both novice and advanced readers. He has even provided a helpful list of abbreviations at the beginning. In addition to making this book accessible to a broad audience, Holmes’ analyses and arguments are clear, coherent, and concise. Even if one does not agree with Holmes’ conclusions, the validity of his recommendations is respectable and worthwhile.

Though none has quite the same array of policy and countermeasure recommendations, other books related to organized crimes in Mexico include: Organized Crime and Democratic Governability: Mexico and the U.S.-Mexican Borderlands (University of Pittsburgh Press, 2001) by John Bailey and Roy Goodson, eds.; El Narco: Inside Mexico’s Criminal Insurgency (Bloomsbury Press, 2012) by Ioan Grillo; The Shadow Catcher: A U.S. Agent Infiltrates Mexico’s Deadly Crime Cartels (Atria Book, 2012) by Hipolito Acosta; and Cartel: The Coming Invasion of Mexico’s Drug Wars (St. Martin’s Griffin, 2013) by Sylvia Longmire.

Despite the bleak topic, Organized Crime in Mexico provides an insightful and extensive contribution to comprehensively understanding the immense burden that Mexico is currently confronting. Yet as Holmes states, “although the situation is dire, there is hope Mexico has indicated the strength of its will to survive by enacting sweeping judicial, anti-organized crime, and anti-money-laundering reforms” (p.174).