Book Review of Ike’s Gamble: America’s Rise to Dominance in the Middle East by Michael Doran

Book Review of Ike’s Gamble: America’s Rise to Dominance in the Middle East by Michael Doran 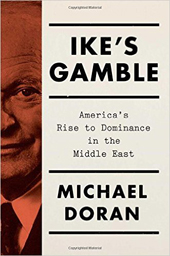 “History,” Mark Twain allegedly said, “does not repeat itself. But it often rhymes.” In Ike’s Gamble, Michael Doran offers a persuasive and riveting revisionist history of President Eisenhower’s foreign policy approach to the Middle East. Contained within the pages is a not-so-subtle warning to current and future American statesmen looking to place the country on “the right side of history” at the expense of our allies and interests. Being on the “right side of history” in that tragic region, Doran warns, is about as useful as being on the “right side of an earthquake.”

Seeking to align himself with the rising tide of Arab nationalism amidst the decline of the colonial powers, Eisenhower empowered Egypt’s Gamel Abdul Nasser at the expense of America’s traditional allies in the region. Doran, a senior director in President George W. Bush’s National Security Council from 2005-2007, in a neatly argued diplomatic history, tells of Ike’s wooing of Nasser, how Nasser duped the Eisenhower administration, and how Ike, ever the pragmatic soldier, coolly reassessed his administration’s disastrous performance in the region and righted U.S policy.

Eisenhower’s initial paradigm for the US in the Middle East was that of the honest broker. Ike believed that the US, untainted by the ugly stain of colonialism, could co-opt Arab nationalism towards American interests and away from the Soviet sphere by helping Arab nationalists extract concessions from both the colonial powers and the newly created state of Israel.

Eisenhower’s “first bet” on this new theory placed him at odds with his wartime ally, Winston Churchill. Churchill, who famously swore that he did not become Prime Minister “to preside over the liquidation of the British Empire,” faced that exact dilemma in Egypt in 1954, when Egyptian nationalists demanded the closure of Britain’s extensive military presence in that country. Eisenhower, “convinced that British imperialism was damaging the American position in the Cold War,” pressured the British to accept the forfeiture of its strong military position with only the promise that they would be allowed to reoccupy their Egyptian bases in the event of a major war. Eisenhower calculated that Nasser would appreciate America’s intervention in this matter, enter the Western security system, and make peace with Israel. He was wrong.

Nasser, empowered and emboldened by his “victory” over the British, immediately began to undermine the entire Western security system in the Middle East. Using American-provided radio equipment and American technical advisors, he broadcast his pan-Arabist message across the region. This propaganda campaign eroded British influence in the Hashemite Kingdom of Jordan and forced the Jordanians to evict the British officers who led the Jordanian military. In Iraq, Nasser combined this propaganda with effective covert action that overthrew the pro-Western Hashemite regime. America’s self-image as “the honest broker” blinded many US officials, including the Ambassador to Egypt Henry Byroade and the Central Intelligence Agency’s Middle East Chief Kermit Roosevelt, to Nasser’s duplicity.

Immediately following the resolution of the Anglo-Egyptian Canal Zone basing dispute in November 1954, Eisenhower’s administration set its sights on an Arab-Israeli peace accord. Code named “Alpha,” this became the highest priority of America’s Middle East strategy. Byroade and others became convinced that, by pressuring Israel to make unilateral territorial concessions and empowering Nasser, lasting peace could be achieved in the region. However, for Nasser, the ongoing border skirmishes with Israel represented a propaganda coup that reinforced his image as the defender of all Arabs. In what Doran calls, “the Alpha contradiction,” the Americans “consciously strengthened the regional actor who saw greatest advantage in perpetuating the conflict with Israel and who was working to undermine the Western position in the Middle East.” The greatest betrayals, however, were yet to come.

On 27 September, 1955, Nasser announced that Egypt had concluded a massive arms deal with Soviet-dominated Czechoslovakia. With apparent failure of the carrot, “Alpha,” Eisenhower’s State Department turned to the stick, plan “Omega.” “Omega” sought to modify Nasser’s behavior and pressure him out of the Soviet sphere. The ongoing battle over financing the Aswan High Dam represented the first test of America’s new, more wary approach towards the wily Nasser.

John Foster Dulles, Eisenhower’s dour Secretary of State, delayed approval of the financing of the Dam due to Nasser’s continued defiance across the region. Nasser’s actions, particularly the Czech arms deal and the May 1956 recognition of Communist China, led to the development of a bipartisan Congressional coalition in favor of isolating Egypt. With Congress threatening to block all funding of the Aswan High Dam and Eisenhower incapacitated by an attack of ileitis, Dulles notified Nasser that the US would not fund the project. On 26 July 1956, in the ultimate counter-stroke, Nasser electrified the world and nationalized the British and French owned Suez Canal Company. The last British soldiers had departed just one month prior.

In response, the British, French, and Israelis created a bizarre plan to punish Nasser and force him to surrender the canal. Eisenhower refused to participate in the plan, noting that “the whole Moslem world would unite in opposition” and, more importantly, be pushed into the awaiting arms of the Soviet Union. When war came in September 1956, Eisenhower, feeling betrayed by his NATO allies, once again sided with Nasser. Saying privately that “we cannot be bound by our traditional alliances,” Eisenhower publicly demanded an immediate withdrawal of Anglo-French-Israeli forces and resolution of the conflict in the UN General Assembly. He also refused to re-supply the British, whose economy was in free fall due to the loss of oil shipments from the Persian Gulf, with American crude. “How could we possibly support Britain and France,” Eisenhower pondered, “if in doing so we lose the whole Arab world?”

Ike had gambled again on the illusive blessing of Arab public opinion and in doing so humiliated and weakened our erstwhile allies. Eisenhower had little choice but to publically condemn the aggression. However, behind the scenes, Doran argues, he could have done more to support America’s allies and weaken Nasser. A ceasefire in place, similar to the one employed by Henry Kissinger to resolve the Yom Kippur War in 1973, could have resolved the conflict in a manner more favorable to our allies and avoided handing Nasser another propaganda coup. Indeed, Eisenhower himself later came to this conclusion. Dulles agreed, noting in an NSC session following the fall of the Hashemite regime in Iraq that Nasser “enjoyed an unbroken series of success, due largely to our support…Our actions had enabled Nasser to emerge as a great hero, who seemingly took on the great powers and came out with a victory.” By 1958, Eisenhower, ever the pragmatist, recalibrated America’s Mideast policy from the “honest broker” to the “interested mediator.”

Doran’s assessment, and Eisenhower’s own personal regret, offers sober lessons for the US in the region. American policy must pay close attention to inter-Arab politics. It must recognize that power struggles within the Middle East are of greater importance to local rulers than the conflict with Israel. In fact, the perpetually simmering conflict with Israel only serves to reinforce the legitimacy and popularity of undemocratic Arab regimes. The Arab-Israeli conflict, Doran notes, is neither the central strategic challenge of the Middle East nor the “silver bullet” that will achieve stability in the region. Finally, with the Middle East in the midst of another historical crisis of political legitimacy and instability, Americans must “adopt a tragic perspective” and assume that “the solution to every problem will inevitably generate new problems.” Mr. Doran’s humbling conclusion does not advocate American withdrawal from the problems of the region. Rather, like the pragmatic Eisenhower of 1958, we must adopt the position as the self-interested manager of inter-Arab, inter-sectarian, and Arab-Israeli conflicts and leverage this position to advance American interests in this troubled region.