Book Review: Inside Al-Qaeda and the Taliban: Beyond Bin Laden and 9/11 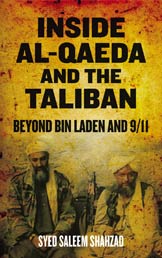 True to its name, Syed Saleem Shahzad’s Inside Al-Qaeda and the Taliban goes beyond the common misperception of Al-Qaeda as a static organization serving the whims of Osama Bin Laden. Shahzad describes a changing cast of characters, the high commanders and foot soldiers who comprise the world’s most famous terrorist network. He provides a detailed account of its relationship with the Taliban, illustrating how Al-Qaeda’s core goals and objectives have evolved over time, particularly with regard to the role of local terrorist organizations. On the whole, Shahzad—a Pakistani journalist who was brutally murdered, apparently as retribution for his reporting—makes a significant contribution to our collective understanding of Al-Qaeda. (Shahzad’s book was published on May 24 – only three days before he went missing from Islamabad on his way to a television interview. His body was found on May 31. For a detailed description of Shahzad’s death, see Dexter Filkins, “The Journalist and the Spies,” The New Yorker (Sept. 19, 2011).)

The book’s stated goal is to inform readers of Al-Qaeda’s long-term strategic goals and its immediate tactical objectives. Strategically, Al-Qaeda seeks to ignite an “end-times” battle; a war fought over Ancient Khurasan—which includes parts of present day Iran, Afghanistan, Turkmenistan, Uzbekistan, and Pakistan—to catalyze the Mahdi’s return to form a global Muslim Caliphate. (For more on Al-Qaeda’s ideology, see Tom Quiggin, Understanding al-Qaeda’s Ideology for Counter-Narrative Work, Perspectives on Terrorism, 3(2) (2009)). To achieve this goal, Al-Qaeda aims to become ubiquitous and immortal. Many have analyzed the pursuit of a jihadist safe haven in the Pakistani borderlands, but Shahzad describes a goal that needs no base of operations; Al-Qaeda aspires to “breathe its soul into a new order” (p. 117), recruiting new leaders from the various Islamic resistance movements spread across the globe. These new leaders—with both strong local ties and loyalty to Al-Qaeda—will then render the broader jihadist movement inextricable from organizations like the original Afghan Taliban, the Pakistani Taliban, the Haqqani Network, and Somalia’s Al Shabaab. According to this logic, if every Muslim militant organization in the world is “part of Al-Qaeda,” then Al-Qaeda itself will never be defeated. Shahzad calls this strategy a “living” version of the ancient Arab and South Asian story of A Thousand and One Nights, the recurring metaphor throughout the book: “as each story ends, its characters fade into the background, but the tales move on with another story of equally motivated characters” (p. 220).

The main theme of Shahzad’s book is how the dynamic between Al-Qaeda and the Taliban, Afghanistan’s “sons of the soil,” has evolved over time. The vision of Al-Qaeda’s senior leadership is to make the organizations one and the same: the Afghan franchise of the global Al-Qaeda brand of militant jihad. The “Al-Qaeda-ization” of the Taliban can be seen most distinctly in the increasing prominence of Lashkar-al-Zil, the elite “shadow army” comprising a mix of Al-Qaeda foreigners and Taliban natives that has carried out many recent successful attacks on NATO forces and Pakistani army units. (For more on Lashkar-al-Zil, see Bill Rogio, Al Qaeda’s Paramilitary “Shadow Army.” The Long War Journal (February 9, 2009)). The success of this co-optation effort in Afghanistan, however, is only the most prominent manifestation of Al-Qaeda’s strategy of bringing local organizations “into its fold to use them to forward its global agenda” (p. xvii). In outlining this development vis-à-vis the Taliban, Shahzad describes the role of bin Laden and current Al-Qaeda head Ayman al-Zawahiri, as well as influential but lesser-known figures whom Shahzad calls “the real leaders of the movement” (p. ix), including Ilyas Kashmiri, Haroon Ashik, Sirajuddin Haqqani, and Ziaur Rahman.

The book’s strength lies in Shahzad’s storytelling and his vast experience as a journalist on the jihadist beat. He brings a wealth of knowledge and a reporter’s eye to his narration of Al-Qaeda’s complex tapestry of personalities, motivations, and backgrounds. Shahzad excels at regaling the reader with tales of Taliban leaders dying their beards, seaside strolls near Karachi with rising Al-Qaeda commanders, and Shahzad’s own narrow escape from NATO forces while interviewing Taliban fighters. This level of detail will appeal to those versed in the study of Al-Qaeda, but to the uninitiated, Shahzad’s prose will often read like a Russian novel filled with an unending ensemble cast of characters, zigzagging back and forth across the boundary between colorful vignette and tedious minutiae. Those with a scholarly interest will be disappointed by the near total absence of supporting materials, while Shahzad’s penchant for stereotypical statements and apparent admiration for Al-Qaeda invites skepticism from the reader. We are told, for instance, that “Arabs tend to be more resilient fighters than Afghans” (p. xvii) and that Al-Qaeda exhibits “unmeasured energy emerging purely on the strength of conviction and human ingenuity” (p. x-xi) while roaming “as free as the mountain eagle” from its “magic castle” base in the Hindu Kush (p. 180-181).

While Shahzad emphasizes that “there is more to Al-Qaeda than just bin Laden” (p. ix), it is difficult to differentiate the strategy he describes from its logical end. The “next generation leaders” he profiles are the result of Al-Qaeda’s strategy of local leadership cultivation, not those who conceived of this strategy, who are given short shrift. Shahzad fails to address the strategy’s origin; bin Laden was, as Shahzad emphasizes, “in the background” (p. 225), but it seems unlikely that he and Al-Qaeda’s leaders were uninvolved with this major strategic push.

Shahzad’s final work builds on an enormous body of writing—from the scholarly to the biographical—about Al-Qaeda. The book’s focus on the inextricable link between Al-Qaeda and the Taliban, however, comes at a critical time. The U.S. assault in October 2001 U.S. originally targeted the Taliban only for harboring Al-Qaeda; NATO’s exit strategy is centered on the idea of negotiating with the Taliban to forestall Al-Qaeda reacquiring an operating base. This goal is achievable in theory, but the Al-Qaeda-ization of the Taliban—the culmination of Al-Qaeda’s strategy of co-opting the world’s Muslim resistance movements—makes it increasingly difficult in practice. How can the United States negotiate with the Taliban to keep it from tolerating Al-Qaeda when the two groups are becoming inseparable? In his final contribution to a debate that needs informed voices, Shahzad shows that there is no good answer to this question.

Beau Barnes is a joint-degree student at Boston University Law School and the Fletcher School of Law and Diplomacy, where he focuses on national security law and policy.

The book is rightly seen as a good initial tool to describe what words alone cannot figure, the metaphysical Leninism of "The Base", this being more than a geographical place and approaching "The Fundaments".
Not topos, but u-topos.
The lack of reference material, the literary style, etc., are flaws if we see this as a "normal" (social) science work. It is none of that, but more an impressionistic insider's account of someone who obviously knew the characters, the interpreters, the scenario, the narrative, the meta-text.
Some of this is unassumed romance, some is oral history under other guise, some reporting, some a kind of diary, or notebook (the notes being the full content).
The fact that the book challenges certain assumptions is good. Excellent. The fact that it gives few answers means that these are not yet possible. Only at the end of the full history we will have an end to the riddles.
And final revelation may be uglier than what the author expected.