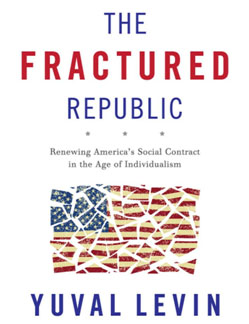 The grinding work of national security policy in a complex world is made more difficult by fractured politics at home. Whereas America generally enjoyed broad consensus on Cold War containment strategies, post 1991 policy has vacillated between international (often militaristic) humanitarianism, preventative war, and global counter-terrorism. Though all of these policies operated under various pro-American titles such as Pax Americana, none truly sought public buy-in, nor obtained domestic consensus. Part of the reason for this situation is the unipolar world that emerged after the fall of the Soviet Union, creating a situation in many ways ill-suited for our democratic republic’s political structure. While our national security apparatus (and military structure) remain largely unchanged since 1948, America’s domestic politics are as fractured, bitter, and divisive as ever. Developing sound policy and, hopefully, grand strategy, in this environment is nearly impossible.

Solving problems first requires unflinching understanding. In Fractured Republic, conservative columnist and former Bush Administration staffer Yuval Levin delivers a sharp critique of American political leadership, offering compelling reason for America’s bitter partisanship. Levin believes much of the current gridlock results from pathological nostalgia. He lays the blame at the feet of the Baby Boomer Generation and their leadership of the dominant political parties both of which  are tied to a nostalgic vision of America from the late 1950’s and early 1960s, albeit for different reasons.

The Left sees that time as the height of the unionized worker, when every American, regardless of education or skill, could provide a middle class life to his family. It was also the era of the Great Society, when the state mobilized its vast resources to attack poverty, discrimination, and a host of other societal ills. On the Right, the nostalgia is two-fold. They hold the pre-liberalization culture in high esteem, while conservative economic policy remains stuck in the early 80s. American culture prior to the Sexual Revolution and Great Society, especially the 50s, represents a wholesome view of American to the Right. This was a time when a predominantly Christian moral consensus enjoyed widespread support. According to the Right, during this period American companies enjoyed worldwide dominance in nearly every industry and government remained in the background of both economic and social life.

Levin dismantles Boomer nostalgia for this period and its pathological influence on modern political debate. In the book’s best chapter, The Age of Conformity, Levin outlines just how anomalous the post-war decades were in terms of economic, social, and political structure. After spiking in the 1920s, the number of non-native Americans declined to below 5% midcentury, only to rise again to over 11% by 2000. Additionally the American economy well into the 1960s was remarkably statist (some industries remained highly regulated until the 70s) .  while the Soviets provided a monolithic foreign threat that helped shape a national conscience. Conservatives believe midcentury government was restrained, but the top income tax bracket also exceeded 80% during this period while trucking, rail, and airline companies all had to literally submit their routes to government agencies for approval. To liberals, the massive government programs designed to improve our social condition are a hallmark of this nostalgic era. However, Levin shreds them as ossified, often irrelevant, and expensive bureaucracies that largely failed to meet their goals, despite trillions spent in needs-based assistance. Moreover, the social liberalization engendered by the Sexual Revolution, Civil Rights Movement, and Antiwar Movements created what Levin calls hyper-individualism at the expense of stability producing cultural institutions, specifically the church.

Levin summarizes this pernicious nostalgia as both incorrect and irrelevant: “Our politics remains under the sway of nostalgia for the mid century golden age—temporarily suspended as it was between an era of consolidation and age of liberalization, and therefore now essentially irrevocable.” In other words, even if those were the good ‘ole days, they aren’t coming back.

This is an abstract book. With the exception of higher education, which Levin says has become too utilitarian and, like our modern culture, ignores the soul, Levin largely ignores specifics. There is no mention of the impact of the Vietnam draft on the cultural movements of the 1960s for example. Nor is there any mention of how the All-Volunteer Military disconnected itself from society and decoupled foreign policy from domestic consideration. Defense professionals will wonder why Levin does not discuss the major foreign policy events that helped create our Fractured Republic, specifically the fall of the Soviet Union and the vacuum it created. Likewise the rise of China and the impact of Globalization are barely mentioned.

However, these choices do not slow Levin’s narrative, which builds from the nostalgic “Age of Conformity” through our modern “Age of Anxiety.” He identifies the principal change from then to now as the “hyper-individualism” of the American soul. Levin suggests America has discarded large, traditional institutions, for smaller, more personal ones or, in some cases, no institutions at all. Numerous indicators, particularly out of wedlock births indicate the traditional family holds less sway (though this has improved over the last decade). The breakdown of the family, particularly among the poor and its debilitating effects has been known for years thanks to the work of Charles Murray among others.

To answer this breakdown and reshape our conception of citizenship, Levin proposes a modernized version of American conservatism, decentralized, updated, and adapted for our modern society. Levin borrows often from Tocqueville to describe how our modern hyper-individualism has inevitably created a centralization of political power at the national level, neutering state and local government and making national politics acerbic. Contrasting the Founders’ vision of a united republic of independent states, Levin says Washington often treats states as appendages, rather than partners.

The result is our modern “Fractured Republic,” a place in which individuals have everything and simultaneously have nothing. Rather than a few broad cultural currents, we have a multitude of channels in which Americans can experience their lives. This is both good and bad. Minority, LGBT, and other marginalized groups can now enjoy their live as they see fit. Levin doesn’t judge the divergence of our cultural river as right or wrong; it is the fact of the day and Levin argues our politics must adjust accordingly, not simply offer visions of the past as solutions for problems of the present. It helps little  that the majority of the nation’s political leaders are Baby Boomers who were raised  in the age of nostalgia.

Levin makes the case for a modernizing of politics that avoids radical individualism and the trap of nostalgia arguing that only by reforming our view of how government interacts with citizens—and citizens with each other—can we revitalize our politics. Levin calls his solution to our bifurcated, divided society “subsidiarity,” by which he means a rebirth of Federalism to include civic, religious, and governmental institutions. Only by communal engagement at the local level, specifically churches and schools, can we mitigate bitter national debates and rebuild American Citizenship for the modern era. He makes a compelling, if abstract, case for the importance of local institutions operating through engaged, conscientious citizens as the way to accomplish the ends of revitalizing our republic.

If Levin’s analysis and diagnosis of the current state of American citizenship is precise, his prognosis suffers from an abundance of the theoretical. After convincing the reader of his diagnosis of what ails the American body politic, he offers only abstractions for a solution, leaving the work of restoring the American ethic to “the coming generation.” Of course, the decentralized, local solutions Levin advocates are necessarily unknowable at the national level, but national leadership through either policy or vision is required to empower such a movement. The book lacks general advocacy beyond, “revitalize communities” and “refresh Americans’ understanding of liberty” would do well to sum up his case. Specifically, Levin overstates the impact that community churches can have, particularly at a time when Christianity is on a decades-long decline, especially among the young. By avoiding specific policy prognostications—which a man of his experience and intellect surely has several—Levin undercuts his own argument.

Levin, reserves much of his harshest criticisms for his allies on the Right, something he admits early on. Conservatives, in his view, have remained nostalgic about the culture of the 1950s and the economic policies of the early 1980s. Too often modern Republicans overstate the promise of economic growth as a panacea for all of the nation’s ills. As opposed to seeing the early Reagan policies as specific and targeted for the problems of that era, they have taken them as gospel, insisting these policies are axiomatically good and should be applied to every situation. On the culture side, Levin accuses the Right of too often “playing the victim, lamenting a time long since passed,” rather than developing a conservative vision fit for modern America.

For national security professionals the absence of foreign policy issues in Levin’s book is telling. He leaves them out not due to errors of scholarship, but because foreign events are generally of no concern to Americans, particularly during election years. Though Americans generally consider themselves exceptional, there is no broad consensus on what that means, especially without the foil of the Soviet Union for comparison. Furthermore, as Levin points out, the bifurcation of our politics into partisan camps with no middle can only make developing national security and foreign policy, both of which rely on broad consensus, more difficult.

To those that say social media and diverse news sources are to blame for hyper-partisanship, Levin argues their emergence is more a result of hyper-individualism than a cause. Self-selection of media to meet personal biases is the logical outcome when national institutions are necessarily weakened over 50 years. Meeting the challenge of rebuilding our social contract in this environment will not be easy, but understanding how we came to be in this situation is a smart first step. For any citizen interested in how we came to react so harshly to each other and how our politics came to be so divide, The Fractured Republic is time well spent.

John Bolton is the Deputy G3 for Train Advise Assist Command-East (4/25 IBCT (A)). He is a graduate of the Command and General Staff College’s Art of War Scholars Program and holds degrees from West Point and American Military University. His assignments include 1st Engineer Battalion and 1-1 Attack Reconnaissance Battalion with deployments to Iraq and Afghanistan. The views presented here are his alone and not representative of the U.S. Army, the Defense Department, or the U.S. government.