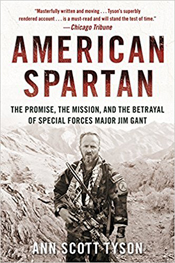 This vivid narrative about an extraordinary American officer in Afghanistan presents two stories, both of interest to military professionals.  One story recounts the journey of Special Forces Major Jim Gant — a true believer in the mission in Afghanistan — and his efforts to bring peace and stability to a country battling an insurgency.  Here, the author Ann Scott Tyson defends the reputation of Major Gant, who was found guilty of an inappropriate relationship, drug and alcohol use in a theatre of war and misappropriation of military funds.  This misconduct resulted in his dismissal from the Army and the revocation of his Special Forces tab.  The second story captures Gant’s brilliant execution of Village Stability Operations (VSO), a mission requiring US Soldiers to live in Afghan villages alongside the locals, and partner with Afghan leaders and security forces to secure their homeland and eliminate the Taliban.

It initially appears that Tyson, a former war correspondent, aims to spin a tale of a forsaken warrior out of place in a modern war.  However, Tyson’s romance with Gant and co-habitation with him on a remote outpost in Afghanistan is more discerning.  While this led to the charges of misconduct, Tyson’s access to Gant provides exceptional insight into Gant and a firsthand perspective of the VSO mission.  She reveals Gant’s unique ability to engage Afghan tribal leaders and fighters.  Tyson attempts to redeem him by highlighting bureaucratic misunderstandings of Gant and his mission objectives.  She actually does more for Gant by explaining how he masterfully earned the trust of his Afghan allies, fighting alongside them to completely drive out the Taliban from his area of operations.

Village Stability Operations require building partner force capacity in the Afghan military and local police forces while simultaneously improving governance and development at the village level.  The VSO mission relied on Special Operations Soldiers working “by, with and through” their Afghan counterparts.  Given her intimate experience watching Gant in his VSO mission, Tyson has compiled “best practices” for earning the confidence of Afghans, and building effective security forces capable of standing up to the Taliban.  Ultimately, the VSO mission proved successful in several provinces in Afghanistan.  Although Gant crisscrossed a myriad of moral and ethical boundaries during his deployment, there are important lessons to take from his tactics and leadership in counter-insurgency environment.

My fellow veterans and I know the value of proven VSO practices.  I was a Civil Affairs team leader at a Village Stability Platform (VSP) site in southern Afghanistan in 2012.  Similar to Gant, my team was based in a rural Afghan village and tasked to build the capacity of security forces, mentor local leadership, and develop local infrastructure and resources, such as healthcare and schools.  During my nine-month deployment I saw a marked shift from Taliban control to legitimate local government, resulting in villagers openly defying the Taliban.

Tyson explains the importance of every team member in the VSO mission.  She illuminates the criticality of cultural understanding of the local population, and wholly embedding with a partner force.  Only when this is done will the indigenous population fully abet the presence of American forces in their village.  To earn the loyalty of Afghan villagers, Gant and his team entrusted the Afghan local police with their lives; living, eating and fighting by their side.  Employing these precepts, Gant, a few Special Operations Soldiers and an attached Infantry platoon were able to construct VSPs in areas of heavy Taliban presence.

Although Tyson fluently chronicles Gant’s achievements and his operational lessons, she also attempts to discredit the decisions made by several senior US commanders by challenging their reasons for prosecuting Gant.  This is an important element of the story, but Tyson’s arguments are subjective, and her motivation is clearly to justify Gant’s actions.

The value of Tyson’s book lies less in the story of Gant’s downfall than in describing his very effective performance of his VSO mission, and his day-to-day life with his Afghan companions.  In today’s wars, a major military task is training, advising and assisting our partner security forces to develop the skills they need to win their population’s support, and overmatch their enemies.  Without this capability, the host nation’s government will not be able to sustain their counterinsurgency efforts.  Tyson returns to this theme throughout her book.

Many Special Operations teams have been assigned the VSO mission, but I’m not sure they all understood what is necessary to succeed.  I appreciate both stories in this book.  I respect the sincere and forthright story of Jim Gant and Ann Scott Tyson and their struggles and accomplishments in Afghanistan.  But I am especially taken by the second story — a guide for how to work with partner forces to gain their trust and confidence.  Both stories emphasize the cultural understanding and personal passion necessary to accomplish such missions, combined in the person of Jim Gant.  This book is excellent pre-deployment reading for anyone assigned to overseas missions involving direct indigenous peoples.  I will read it again, pass it to my team members, and keep a copy in my kit bag the next time I’m sent “downrange.”

Major Jennifer Jantzi is a Civil Affairs Officer currently attending the Naval Postgraduate School at Monterey, California and earning a MA in Defense Analysis.  She is a 2006 West Point graduate and has served three tours to Iraq and one tour to Afghanistan.

The weakness of Gant's ideas are that they do not tally with the reality of the modern army. It would be nice if one could just assign teams (well really hundreds if not thousands)to go up in the hills for a couple of years and live in huts eating rice but that's not possible. Maybe letting them have girlfriends, drugs and booze might make it more palatable but the chances are 100% things would soon go off the rails. Gant was lucky he didn't lose anyone. Just lucky. On a much larger scale catastrophes would be guaranteed- all for a war most know realize is irrelevant.

BTW much like a "Clauswitzian" quote any story which claims the subject is "just like Lawrence" should be immediately suspect unless the author means his accomplishments have been deliberately exaggerated by a journalist for their own purposes.

In most of the photos in the book Gant is wearing local clothing. Didn't that make him an "unlawful combatant"? Just wondering about the hypocrisy of the entire business of being shocked and outraged that the peasant enemy don't wear uniforms while at the same time pushing for the CIA and Spec Ops (complete with beards so they can go in disguise)to take the lead.

It's unfortunate that Marlon Brando is no longer available to play Gant in the movie.

There is an April 2014 review of this book and a number of comments on: http://smallwarsjournal.com/blog/the-rise-and-fall-of-major-jim-gant-up…