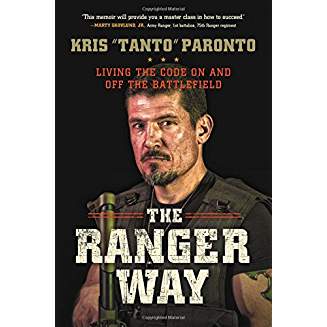 It’s often funny how our personal reading can influence our professional reading.  In the past few weeks, I was reading The New American Militarism by Andrew Bacevich for my own gratification, as well as No Sure Victory by Gregory Daddis.  Respectively, these books argue that the United States should relinquish its role as an overextended, occupying global police force, and that the Army in Vietnam was too concerned with the collection and analysis of data.  While reading these two books, I was assigned to read and review The Ranger Way by Kris “Tanto” Paronto.  His work, and his personal philosophies, could not be any different from those of the other two authors.

Paronto’s book is not an academic, historical, or scholarly work, although it does contain his personal accounts of his involvement in the September 11th, 2012, attacks on the US Special Mission in Benghazi, Libya.  Rather, it is a motivational book, written to inspire the reader, and containing wisdom Paronto gleaned from his time with the Rangers.  His writing is athletic and concise, in keeping with the Army writing style; Paronto makes a point, telling the reader what he is going to tell them, backs it up, demonstrating how his point relates to his life experiences, reminds the reader of the point, restating his original objective and summarizing his observation, and moves on to the next bullet.  Each chapter of the book feels as though he is giving a block of instruction.

The author ties his points together with excerpts from the Ranger creed, the simple statement memorized by all aspiring members of the elite fighting force that guides their actions and informs their decisions.  Paronto encourages the reader to energetically and enthusiastically pursue their goals, regardless of whether or not they are actually affiliated with the military.  He argues that the hardest part of achieving one’s goals is overcoming the psychological obstacles one finds in their path.

The book is not without its flaws.  There were a number of instances where Paronto does not explain events thoroughly enough, and a reader, especially one with previous military experience, is left wondering what happened.  For example, the author mentions the fact that he attended basic training twice, due to the fact that he was prior service, and that, upon arrival at reception battalion during his second enlistment, he was afforded a certain degree of freedom of movement.  There are service members with longer breaks in service that were not made to attend basic again; the thought of being afforded any freedom of activity while in basic training seems completely unfamiliar to a reader who attended that training.  He also briefly mentions the fact that he was a commissioned officer, but does so in a way that provides no details and leads the reader to immediately question the validity of the statement.

Regardless, a service member will also recognize some of the events Paronto describes; his experience with reenlistment after receiving a DD Form 214 with an RE code of “3” and his difficulty in receiving a waiver to re-enter the service is common ground for a number of veterans who left the military in the nineties and returned after the events of September 11th, 2001.  It was common for a commander to separate a service member for “failure to adapt” to military life or for a military psychologist to determine that a Soldier or Marine suffered from a “personality disorder” if they mentioned that they had difficulty sleeping.  Yet the needs of the Army eventually allowed for the waiver of such limitations, especially in the years leading up to the “surge” in Iraq.  Also familiar is Paronto’s tale of interacting with a physician who waived his physical limitations so that he might re-enter the service as an infantryman; there are many stories of how doctors might overlook a Soldier’s color blindness in order to attend airborne school or other military training.

I’ve never attended Ranger training myself, but many of my own experiences do parallel Paronto’s.  After reading the book, I found myself wishing that I had attended Ranger training in my youth; his writing is concise and inspirational enough to almost have made me believe that I could complete it even now, in my forties.  I would recommend the book to anyone seeking a personal account of the hardships experienced by Soldiers and Rangers in training, and of the success that comes from hard work, determination, and resilience.  The Christian overtones of the book made me a little uncomfortable; however, it is easy to see that, regardless of whether or not the United States military should be a global police force, Paronto believes in American exceptionalism.  He doesn’t care for the politics surrounding the incident that made him famous, but his fierce individualism, personal strength, and belief in American ideals are all clear in his writing.

Staff Sergeant Brian Darling recently completed the Advanced Leaders Course at The Judge Advocate General’s Legal Center and School in Charlottesville, Virginia.  SSG Darling is Paralegal Noncommissioned Officer serving in the Office of the Staff Judge Advocate, Joint Force Headquarters, New Jersey Army National Guard.  As a Paralegal Noncommissioned Officer, SSG Darling works closely with the Legal Advisor to the Adjutant General and the Administrative Law Attorney.  He is responsible for the construction of separation packets IAW AR 135-178, Withdrawal of Federal Recognition Packets, and the drafting of General Officer Memoranda of Reprimand.  SSG Darling assumed his current duties on 31 January 2011, with a year-long break while deployed as the Battalion Paralegal Noncommissioned Officer, 1st Battalion, 114th Infantry.