Book Excerpt: “The Embassy: A Story of War and Diplomacy”

Book Excerpt: “The Embassy: A Story of War and Diplomacy” 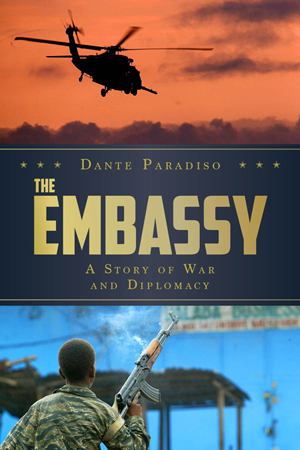 Excerpted from The Embassy: A Story of War and Diplomacy © 2016 by Dante Paradiso, to be published by Beaufort Books (New York).  The views expressed are the author’s own and not necessarily those of the United States Department of State or the United States Government.

The rains came at night. Each morning cumulous piled like dirty white plantation cotton atop the hills to the north and east, then tracked the arc of the sun, rolling down the slopes and spreading out over the barbed green canopy all the way down to the coast. At dusk it would start, a stampede across the zinc roofs as the palms and broadleaves in the yards bent and wept like penitents. The rain hit so hard it bled through umbrellas, pried off gutters, beat branches to the ground. Trenches swelled with debris and the rush of water carried the mixed smells of soil and plants and garbage. It gusted through the night then, near dawn, it would let up. For a time, all that could be heard was the murmur of the streams and the drip of the water from the trees. Then the cicadas would start up again, and the birds, while small mists danced across the silt-clouded pools along the street.

It was hot, it was humid, it was uncomfortable, yet the work had to be done. The day after the rebel attack on the capital city broke off, Operations Coordinator Robert “Fergy” Ferguson slid behind the wheel of “fifty-eight,” the white Defense Attaché Land Cruiser that he called by its plate number, CD-58. At Fergy’s insistence his driver Jay Jay stayed home to look after his own family. The Operations Coordinator brought a political officer along with him and handed him a Baretta. The officer hesitated and Fergy asked if he had ever fired a gun before. “No,” came the reply. Fergy tossed it into the backseat with a couple of clips and threw a square of blue terry cloth over it.

Fifty-eight could be moody and the engine spit and coughed before it finally turned over and roared to life. They drove out to empty streets. The crush of people at the gates less than twenty-four hours ago was gone, dispersed, wandered off to who-knew-where with their sacks and bundles. Duff of blackened leaves, fruit rinds and crushed cardboard boxes gummed up the curbs, while shreds of translucent blue plastic bags flapped in the branches of the jacarandas. Downtown, shops were open and people milled in the street. Security forces were noticeably absent, though the few they came across saluted as Fifty-eight rolled past. “Sorry motherfuckers,” Fergy said.

The embassy men gleaned little from the expressions of passers-by, the same milieu of blurred faces, eyes lit with cane juice or dim with want and sickness. Fewer cars, perhaps, but larger crowds downtown. If you knew nothing of the past week’s events, you would not have known that the city had been attacked so recently. There was a strange elasticity to the place. It was much as before: bright, steaming, and poor.

“I guess they got to be happy for the good days,” Fergy said idly.

They crossed the river, its scuffed surface moody with the shadows of the passing clouds. Bushrod Island was eerily quiet, no trucks at all and few taxis. South of the Bong Mines Bridge, an old iron-wrought railroad overpass that bisected the island and linked the port to the inland hills, they came across the Toyota dealership. The bars of the security grates were bent out and gapped, pried open with wire cutters and crowbars, and the plate glass windows lay shattered on the ground, shimmering in the light like melting ice. Divots and scarring from gunfire were obvious on the walls.

“I doubt the rebels made it this far,” Fergy said.

He meant: Operation Pay Yourself had visited.

Further on, traffic tailed off to nothing. The steel curtains of the warehouses were all shuttered. There were no vendors on the curbs. Even the kiosks that sold “scratch,” the ubiquitous pre-paid calling cards for the lone mobile company, were nailed shut. The U.S. embassy was the largest customer for scratch even though the profits, it was said, were split between Liberian President Charles Taylor, his crew and Lone Star’s Lebanese principals. Further along the island, Duala Market was barren, the market stalls now a graveyard of broken planks, shredded gunny cloth, and sticks that jutted out menacingly like headhunter spears. Light foot traffic seemed to be mostly displaced people headed back across Saint Paul, back to the camps they just left to see if the relief organizations had returned with food and water bladders.

European Commission Aid Coordinator David Parker had told Fergy that the international relief community was down to a handful of expatriates who had started to meet each night on the patio at Malik compound, a staff house for the International Committee of the Red Cross close to the U.S. embassy. Under a single pale light as the mosquitos flitted above, they used a simple chalkboard to divvy up tasks and create a plan to triage an entire country. Monrovia had few services to offer before the attack and now it absorbed more than one hundred thousand new people. What little infrastructure had been built up at the camps, from maternal health clinics to classrooms, had been knocked down. The needs were staggering and logistics for the non-governmental organizations were fouled up with so much uncertainty as to who would stay and who would be forced to evacuate. At least, Parker said, most of the warehouses were still secured.

Fifty-eight rumbled into New Kru Town, the densest, poorest quarter of the island, where houses and shacks stood shoulder to shoulder like passengers on a country bus. The air was thick with the stench of overfull pit latrines. Skinny, sickly women propped elbows on sills and waved listlessly at the bottle flies. At the roadside, the grass was bent, trampled, and muddy, and shade trees so few that you might have thought Liberia was a desert country. In places, plywood was splintered and mesh screens slashed. Corrugated tin roofs were punctured with bullet holes to give them the look of cheese graters. Fergy pointed to a pair of kiosks where cinder block walls lay in rubble.

At Redemption Hospital, the only inpatient clinic in New Kru Town, they learned the staff of Médecins Sans Frontières had relocated to Mamba Point. Patient charts littered the floors in the narrow, abandoned corridors and filing cabinets lay on their side, drawers ripped off their tracks, emptied, and cast aside. Rods from intravenous stands were piled in one room like pick-up sticks, their plastic drips wrinkled and drained of fluid and tubing fogged with mold. Mattresses had been ripped from bedframes and soiled sheets tossed carelessly in the corners, while here and there black drag marks of blood could be seen on the floor, evidence of a crime scene with no police to tape it off. Out back, an elderly local staffer in a blue jumper swept caramel colored water into a drain in the courtyard. White, glistening maggots writhed at the edge of the grate and the smell of the sepsis overwhelmed the senses. The man paused at their approach.

“From the fighting?” Fergy asked.

“They snatched the medicines, kicked them out of bed.”

“All the dead were patients here?”

The man shook his head slowly.

“We took many from the streets.”

“Rebels, militia, nobody can really say.”

Nobody could ever say. The only certainty was that gunmen would come again, and nobody could do anything about it. The peace process was remote, an abstraction, no less a fantasy than the diversions that could be watched in the local video shacks. The attendant started to sweep again, the rasp of the bristles across the pavement loud and lonely in the small courtyard.

“The Ambassador is right,” Fergy said as he started the engine.

Dante Paradiso is career Foreign Service Officer, a lawyer, and the author of the forthcoming book “The Embassy: A Story of War and Diplomacy,” Beaufort Books (New York).  Tweet him @paradisoDX.