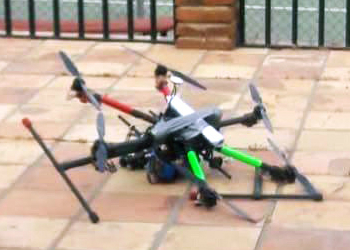 Are drones the weapon of the future for Mexico's criminal groups?

Mexico’s powerful drug cartels could be using armed drones to attack those impeding their criminal operations, marking the potential expansion of the use of this technology from just transporting drugs or carrying out surveillance.

In July of this year, an armed drone was used to attack the house of Baja California state Public Safety Secretary Gerardo Sosa Olachea in the city of Tecate along the US-Mexico border, Zeta magazine reported.

At least two drones were allegedly used in the strike. The first was armed with audio and video equipment and two improvised explosive devices (IEDs) that did not explode after falling into the official’s yard. A second drone was seen above the house likely performing surveillance, according to Zeta.

The July incident was the first time that a Mexican cartel used a weaponized drone to carry out such an attack, according to Mike Vigil, the former Chief of International Operations at the US Drug Enforcement Administration (DEA). However, the “inoperability” of the IEDs suggests that the attack was more likely a method to intimidate the official rather than to carry out an actual attack, according to Small Wars Journal.

Sosa Olachea told Zeta that he thought the threat likely came from one of the drug cartels operating in the area that officials have dealt serious blows against through seizing drug shipments and dismantling drug laboratories.

The Tijuana Cartel, Sinaloa Cartel and Jalisco Cartel New Generation (Cartel Jalisco Nueva Generación – CJNG) are all known to be operating in this specific area along the US-Mexico border.

Towards the end of 2017, the Daily Beast reported on the first apparent incident in which an armed drone intended for use in a violent attack was discovered in the arsenal of a Mexican cartel.

Drones are gaining popularity throughout Latin America among criminal groups and law enforcement officials for their ability to traffic drugs and carry out surveillance. But their use, or intended use, by organized crime to execute violent attacks is a recent development.

A DEA source explained that since 2014, Mexico’s cartels have hired local workers to construct custom-made narco drones to traffic cocaine and other drugs across the US-Mexico border.

Mexico’s security forces have also relied on drones that transmit images and videos in real-time in order to identify key locations used by the cartels to store drugs and weapons or to carry out other criminal activities. US authorities have also utilized drones in Mexico to aid in the so-called “war on drugs” against the country’s criminal groups.

But the latest evidence suggests that drones might be the “way of the future” for Mexico’s cartels for engaging in “cartel warfare,” according to Vigil.

As Mexico’s criminal world continues to fragment, Vigil told InSight Crime that these groups may start to use drones as an “offensive weapon simply because it will not require the loss of human personnel, which is difficult to replace especially if they are trained and have a full understanding of the cartel’s operations.”

InSight Crime on Mexican cartel use of armed drones.

Parker Asmann graduated from DePaul University in Chicago with degrees in Journalism and Spanish, and a minor in Latin American studies. He was a freelance reporter for various publications before joining InSight Crime in 2017.