Another Afghan Election Crisis and the Challenge of Power-Sharing

Another Afghan Election Crisis and the Challenge of Power-Sharing

The Ghani-Abdullah dispute could weaken the government’s negotiating position ahead of intra-Afghan talks.

Approximately five and a half months after Afghanistan held nationwide presidential elections in September 2019, incumbent President Ashraf Ghani and runner-up Abdullah Abdullah have held parallel inauguration ceremonies this week, with each side claiming the authority to form the next government. The current political crisis complicates efforts to open up broader power-sharing talks with the Taliban called for under an agreement signed in Doha at the end of February, as President Ghani seeks to consolidate his authority, and Abdullah and his supporters seek to claim a seat at the negotiating table. 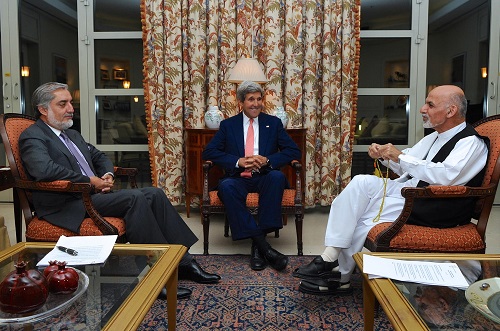 Earlier last month, after two rounds of audit scrutiny and recounts, Afghanistan’s Independent Election Commission (IEC) announced final results for the election, upholding Ghani’s reelection with 50.64 percent of the final total of approximately 1.82 million valid votes. Although Abdullah received less than 40 percent of the total vote, the Afghan constitution requires a second-round runoff election in the event that no candidate clears a 50 percent majority, which Ghani’s margin only narrowly surpassed.

The 2019 elections recorded far fewer valid votes than any previous nationwide Afghan election since 2004, representing only around 19 percent of total registered voters. Multiple factors—including Taliban security threats to polling centers around the country, a short campaign period, the lack of accompanying provincial council elections, and new voter registration requirements—likely contributed to this reduction in turnout. But another major factor that considerably tightened the criteria for what constitutes a valid vote was the decision by the IEC to only accept biometrically verified ballots—after voters’ fingerprint signatures and photographic records were checked by polling staff—as measure to curtail fraud.

As Ghani’s narrow majority became evident through the tallying process, the Abdullah campaign sought the disqualification of several categories of disputed votes, which they alleged had been cast to benefit the incumbent. Between October and December 2019, the IEC went through an extended recounting process to reconcile cases where polling stations tally sheets did not match biometric vote records, eliminated approximately 86,000 duplicate votes based on biometric signature matches, and ultimately invalidated results from roughly 2,300 polling stations (out of approximately 26,500 reported open on Election Day).

But the IEC made minimal changes between preliminary and final results in response to a second audit ordered by the Electoral Complaints Commission (ECC), whose criteria for a second round of scrutiny were more narrowly restricted after the first IEC audit. Both the IEC and ECC ultimately rejected complaints from the Abdullah campaign about the inclusion of some votes recorded outside of normal hours and some other polling stations with apparent discrepancies in their biometric records (which the IEC attributed to polling station worker errors rather than deliberate fraud).

The small pool of total valid votes meant that even small changes to the invalidation criteria set by the IEC or ECC had the potential to alter the outcome; a change of approximately 20,000 votes could have potentially triggered a runoff. Although the IEC has not released detailed information about all potentially disputed polling stations, complicating efforts to make a full assessment of the impact of its decisions, the Abdullah team claims to have a majority of what it terms to be the “clean vote” and has rejected Ghani’s reelection as illegitimate.

Who’s Represented in the Electoral Process?

Taking the election results as reported by the IEC, preliminary analysis suggests that the polity that did participate in the 2019 vote is highly polarized. Although 18 candidates initially registered to contest the polls, Ghani and Abdullah between them received approximately 90 percent of the total vote. With the exception of the national capital of Kabul, votes for the two campaigns were geographically concentrated, as can be observed in the chart below, and split largely along north-south lines. Detailed sub-national analysis of the results is outside the scope of this article, but this polarization also appears to have also been replicated locally, with either Ghani or Abdullah dominating a given area. By and large, these bases of support track with the 2014 elections results, with the exception of a shift in allegiance on the part of Vice President Rashid Dostum, who backed Ghani in 2014 but split with him soon after and endorsed Abdullah in 2019. 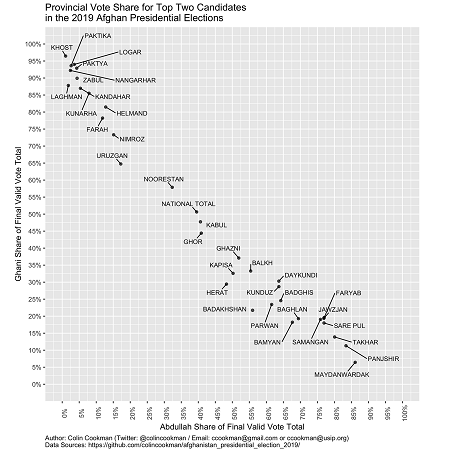 Overall, Ghani and Abdullah roughly split the vote from these capital districts—Ghani received 47 percent of their votes, and Abdullah 42 percent—although Abdullah’s smaller final vote total meant that these urban centers represent a greater relative share of his total electoral coalition. Many parts of the country remain outside the election’s reach, however, with 82 districts reporting fewer than 100 votes, and 41 districts with no votes at all.

The contested electoral outcome echoes a previous standoff following the 2014 presidential elections, whose results Abdullah also disputed; the United States ultimately brokered a tenuous “national unity government” that brought Abdullah in with the newly created position of chief executive. Although both sides have resisted a repetition of that formula, U.S. Special Envoy for Afghanistan Reconciliation Zalmay Khalilzad spent the past week seeking to mediate a compromise.

Despite the fairly limited base of electoral support secured by both leading candidates, Ghani and Abdullah have moved forward with their competing claims to the presidency, which holds substantial formal powers within the Afghan constitutional system. Shortly after the announcement of results, Abdullah sought to stake his claim to authority by announcing a travel ban on election commissioners and making unilateral appointments for several new governors in several northern provinces where his campaign drew the strongest support.

While Afghanistan’s national security forces have not experienced major fractures yet—security personnel in Kabul mobilized this week to protect both inauguration ceremonies—an extended split between the two sides risks a serious test to those forces’ cohesion. In a statement coinciding with the inauguration ceremonies this week, U.S. Secretary of State Michael Pompeo warned that the U.S. “strongly oppose[s] any action to establish a parallel government, and any use of force to resolve political differences.”

The top United States diplomatic priority for the past year and a half has been efforts to open up intra-Afghan negotiations between the Taliban and a government negotiating team, which U.S. officials have repeatedly emphasized must be broadly inclusive. In his inaugural address, President Ghani suggested he was preparing to walk back earlier refusals to move ahead on the release of Taliban prisoners as a precursor to those talks, and would shortly appoint a negotiating team, steps which Pompeo welcomed in his subsequent statement. As of this writing, however, the question of who will receive a seat at that negotiating table, and what mandate they will have to negotiate any potential compromises or concessions with the Taliban, still remains unclear.

Afghanistan’s formal political system, which provides few institutional mechanisms for power-sharing, is disconnected from the multipolar distribution of political power within the country, requiring informal compromises and coalition-building. This disconnect has produced recurrent political crises after each major election held since 2004, and also remains the root cause of the Taliban insurgency against the state.

The main competing Afghan political actors, including the Taliban, have each sought to leverage different sources of legitimacy and power in order to claim representation or authority, and lack of trust among them has thus far forestalled efforts to establish a working consensus on the rules of the political process, leading to political brinksmanship and violence. Resolving this tension requires a broader process of intra-Afghan negotiations among all major political actors. Extended international diplomatic engagement and mediation will likely be necessary if a new consensus can be reached on a new political settlement capable of resolving Afghanistan’s multiple conflicts.

This article is cross-posted here with permission (on agreement) from the United States Institute of Peace.

Colin Cookman is a program officer with the U.S. Institute of Peace's Center for South and Central Asia, working to help support, manage and coordinate research publications across the program's region of focus. He joined the staff in June 2014, after previously working on a part-time basis to support USIP research on Pakistan beginning in February 2013.

Afghanistan has never had a…

Afghanistan has never had a functioning centralized Govt. In Kabul - why do expect there to be one now?  Ask the British; ask the Soviets...Churchill stated that the Durand Line was the cause of the problem - what if Pakistan does not like the current govt.? the Mohammad Najibullah, the Taliban Govt, thought they had a stabilized govt. _ 4 govts. since 11978? None of which worked.....Western type governments (Communist as well - yes, communism" is a western concept) has worked in a tribal society - look at our other failure, Iraq....