Algeria: The Undeclared War - A Review 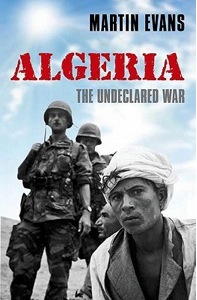 Portsmouth University professor Martin Evans can always be counted on to provide a nuanced and empathetic look at complex political issues.  My first introduction to him was reading his book, “Algeria: Anger of the Dispossessed,” (Yale University Press, 2008) which left wanting to read more of Evans’s views on North Africa.  The author really delves into the political psychology of all sides of the Algerian War of Independence, and highlights that this would be the longest war of decolonization lasting from 1954 to 1962.  The book contains the complex sides within Algeria’s desire for self-determination from France; they include pro-French sentiments, communist ideologies, notions of wanting to be part of the aspirations of French liberalism, Arab nationalism, and those who shade their grievances in religious language.  Among the more active Algerian voices of independence were those espousing a pan-Islamist vision, a pan-Arab vision, and those who are communist in outlook.  On the French side things are not simply reduced to colonial versus anti-colonial, there are Gaullists, settlers who assert their right to colonize, anti-colonialists who argue this betrays French ideals, conscripts versus career soldiers, and socialists.

The book begins with the 1820 “Flywhisk Incident.”  The Dey of Algiers wanted loans made to finance Napoleon’s wars repaid and when the French consul refused he was whipped.  A decade later, this incident led Charles X to justify an invasion of Algeria, landing a force in 1830 that ended with the defeat of Abdel-Kader, a chivalric personality in the 1836 Battle of Sikkak.  This ushered in an aggressive period of subjugation when Arabs were forced to wear on their clothes “Arabe Soumis,” meaning “Subjugated Arab.”  By 1839, there would be 25,000 settlers and only 11,000 were French, the rest came from Spain, Malta, Italy, Germany, and Switzerland.  Evans discusses the mechanism by which Algeria was incorporated as part of metropolitan France, and assigned four departments.  Unlike Tunisia and Morocco that were protectorates, Algeria was legislatively viewed as part of France no different from Normandy or Burgundy.  This brought the question of integration to the fore, and Evans delves into French political pressures that made the central government in Paris unable to integrate Algerian Muslims and thereby further their alienation.

The book contains nicely done biographies of the story of Algerian independence and defined a sense of Algerian nationalism.  Sheikh Abdel-Hamid Ben Badis defined the notion of an Algerian people, nation, and nationhood; he would be among the influential thinkers who came during the post World War I rise of Arab nationalism, the disintegration of the Ottoman Empire, and emergence of independent states.  Ben Badis used the rhetoric of religion to seek Algerian independence from France.  Ferhat Abbas had a different view and wanted to see Muslims enter and truly be part of the French nation, saying this was betraying French democratic ideals and had a corrosive impact on relations among peoples in Algeria.  Messali Hadj advocated political national resistance.  From these views came political organizations such as the Popular Front, and the Algerian Muslim Congress.  After World War II many leaders of Algerian independence had a high respect for President Franklin Roosevelt, thinking the United States would enable the gradual emancipation of colonized peoples in a newly liberated France.

Half the volume covers the Algerian War of Independence itself (1954-1962) and brings to life its French and Algerian figures.  The book discusses the mechanics of how the insurgency led to the collapse of the Fourth French Republic in 1958, the rise of Charles De Gaulle to the presidency and his decision to grant Algeria independence leading to a mutiny of parts of France’s forces in Algeria.  This is an important read for those who a deeper understanding of counter-insurgency, policies, and the incidents that led to the alienation of the population from the French side and the Algerian National Liberation Front (FLN).  Evans for instance highlights how the French ineptly managed Algerians who were loyal to France and vital to efforts to maintain control of the country.  He also discusses FLN excesses in the murder of other Algerians that led to outrage and temporary isolation from segments of the population.

Editor’s Note:  Commander Aboul-Enein wishes to thank the Blackwell Library at Salisbury University for providing a place to write this column.