Recent efforts at settling the decades-long conflict in Afghanistan have featured an increasingly vibrant and visible display of women’s activism. Even with the support of the government and its international partners, Afghan women still face tremendous challenges to realizing their aspirations for a role in peacemaking. Based on extensive interviews throughout Afghanistan, this report attempts to better understand the changing public role of Afghan women today and their contributions to peacebuilding and ending violence. 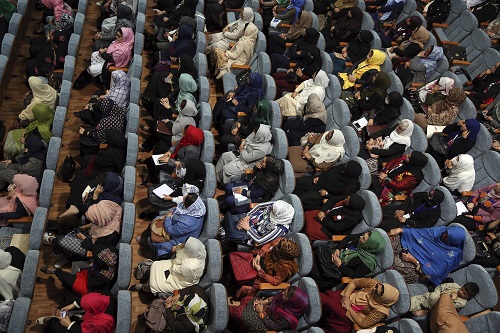 Women attend a meeting of the Consultative Peace Loya Jirga in Kabul on May 2, 2019. (Rahmat Gul/AP)

Participation in violence and, conversely, efforts at peacebuilding in Afghanistan remain dominated by men. Understanding the role of Afghan women in violent extremism and peacemaking today requires reckoning with the polarization between the increasing number of liberal initiatives and the long-standing conservativism in Afghan society, which has traditionally restricted women’s activities to the domestic sphere.

Between these two poles, however, lies a more nuanced, and growing, space where women actively contribute to Afghan society beyond the immediate confines of the home or small community. To better understand the changing roles of Afghan women today and their contributions to peacebuilding or violent extremism, interviews were conducted with 350 respondents (more than 90 percent women), comprising a mix of urban and rural residents in seven provinces. Respondents were queried about activism in their communities, in particular in relation to peacemaking and countering violent extremism; their understanding of and involvement in extremism or violent extremism; their most frequent means of accessing information; and awareness of and participation in organized groups active in their areas.

The study found that what constitutes “extremism” varied by province, most likely tied to the security and political situation of the area and the profile of the respondents. In Kandahar, for example, several respondents linked extremism to violence and even terror. However, all respondents referred to limited acceptance of women’s roles in the public sphere—some citing traditional cultural barriers, others family restrictions—as the primary obstacle to greater activism of women in pursuit of peacemaking. The need for solidarity among women, especially in relation to advocacy for rights and roles, was mentioned as important for women’s empowerment in all provinces.

Noting that Afghan women who are not publicly active often have limited access to information sources beyond their family and immediate circle, the report’s recommendations focus on improving access to information, including through online and offline access to women’s groups concerned with peacebuilding; depolarizing the information flow; and increasing exposure to women leaders.

This report, the result of a study commissioned by USIP’s Asia Center, examines the nature and extent of women’s involvement in violent extremism and peacemaking in contemporary Afghanistan. In-depth interviews were conducted with 350 respondents in seven provinces from June to October 2018. Researchers and analysts at QARA Group Afghanistan undertook the research design, fieldwork, and data analysis under the direction of the authors.

Mustafa Basij-Rasikh is the managing partner of QARA Group. Prior to joining QARA in 2015, he worked on a major donor effort that sought to enhance the role of Afghan businesses in stabilizing the country.

Haseeb Humayoon is the founding partner of QARA Group, an Afghanistan-based research, public affairs, and management advisory firm. He has worked with multiple domestic and international organizations in Afghanistan on advancing human rights and civil liberties and on social and institutional reform.