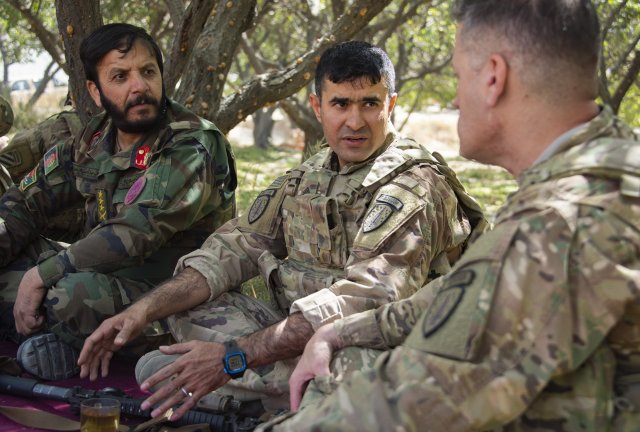 Originally from Afghanistan's Nangarhar Province near the border of Pakistan, Abraham first served as a contractor to support U.S. Special Forces units.

Before and during operations, Abraham, now 35, would translate for the Soldiers and share knowledge about his country's customs and traditions.

"They respected me a lot," he recalled, "and also gave me the chance to explain every situation to them."

The Soldiers also taught him about America, and he became interested in the opportunities it offered.

Years later, those opportunities led him on a path to U.S. citizenship. He also had the chance to return to Afghanistan, where he now serves as an advisor for one of the U.S. Army's newest units, the 1st Security Force Assistance Brigade.

In Afghanistan, about a quarter of the labor force is unemployed and more than half of the population lives below the national poverty line, according to the most recent data provided by The World Bank.

Determined to have a better life, Abraham's hard work as a contractor helped him be recommended for a special immigration visa. In 2013, he was approved and moved his family to the United States to start a new journey.

His first taste of America left him amazed when he and his family first stepped foot onto U.S. soil while switching planes in Chicago.

"We saw everything was very nice and very fresh. We said that this is the life," he said, smiling.

His family chose to live in Missouri and, at first, it took some time to adapt to the American way of life.

The endless choices at megastores, a variety of pay systems (Afghanistan mainly relies on cash), and the other differences in American culture presented some challenges.

"At the beginning, it was little bit hard," he said. "Everything was very new for us."

Abraham and his wife also wanted to be a dual-income family, so both obtained learner's permits so they could drive themselves around.

Although it is legal for women to drive in Afghanistan, many families restrict them from doing so due to safety concerns.

Abraham and his wife studied for the driver's test and frequently practiced behind the wheel. Once the test came, they both passed.

"It was such a big experience and a good day for us," he said.

While things went well in his new home, his heart still longed for Afghanistan and he searched how he could help rebuild the war-torn country.

In 2015, he walked into an Army recruiter's office and told them he once served as a linguist with U.S. Soldiers. Impressed, a recruiter suggested he become an active-duty interpreter.

"My main reason was to come back and use my skill," said Abraham, who speaks Dari and Pashto, the two most widely spoken Afghan languages.

At basic training, Abraham, still an Afghan citizen, was issued sets of the Army combat uniform along with the other trainees. When the time came to wear the uniform, he could not help but share the moment with his family.

"I was very proud and took some pictures and sent them to my family," he said. "They were proud of me, too."

Abraham eventually earned his citizenship and was stationed at Fort Irwin, California, where he and other interpreters helped rotational units at the National Training Center prepare for deployments.

Speaking in his native tongue, Abraham and others role-played as peaceful villagers, insurgents and even detainees to gauge how Soldiers responded.

News then spread across the training base about a new unit designed to bolster the train, advise and assist mission in Afghanistan.

The more he heard about the 1st SFAB and its experienced Soldiers, many of whom have been deployed to Afghanistan, the more it appealed to him.

"I wanted to be involved with such professional people," he said.

Now based at the New Kabul Compound in the middle of the country's capital city, Abraham is one of the most impactful advisors within the brigade's 5th Battalion.

Often, he is at the battalion commander's side, translating conversations between him and senior Afghan leaders.

His respectful demeanor and extensive knowledge of Afghan traditions make him a popular Soldier to almost every Afghan he meets.

"They see him as serving us, but also as serving them," said Lt. Col. Zachary Miller, the 5th Battalion commander.

During important discussions, Abraham is sort of Miller's key advisor to ensure things are not lost in translation or to pick up on cultural cues.

"It's the word choice they are choosing. It may be the way they did or did not answer a certain question," Miller said. "So, if you got a really quality cultural advisor and interpreter, like we do with Sgt. Abraham, he will stop you from asking a question that is not the right time to ask."

When the time is right, Abraham will ask those sensitive questions in private to support the mission.

"Even if you get trained on the Dari language," Miller said, "you'll never be able to pick up on those things if you're not a native speaker."

Wearing the same combat gear as every American Soldier over here, Abraham also surprises Afghans when he speaks in their language.

"They don't realize because I'm in full kit, but after I speak with them they realize I am Afghan," he said, laughing. "I tell them about the service I provided when I was a linguist with them and right now how I support both countries.

"They are appreciative of my service."

With his unit's deployment ending this month, Abraham recently spoke of where his career may go next.

If his family approves -- most importantly his wife and two young children -- he would like to retire as a Soldier.

"Without their support, I could not do anything and achieve my goal here in Afghanistan," he said. "They are part of my heart."

Another part of his heart belongs to Afghanistan.

Abraham is in the process of completing his bachelor's degree and raising his test scores to perhaps re-class to 35P, a cryptologic linguist. That job deals with identifying foreign communications using signals equipment.

Even if he does switch careers, Abraham aspires to be halfway across the world again helping his native country.

"My hope is that one day there is peace in this country," he said.

Army News Service - Since 1943, ARNEWS has been the Army's premier print wire service with the daily mission of telling the service's story to its internal audiences worldwide. The general public is also a tertiary audience that can now view articles on Army.mil. But the target audience remains the 6 million Soldiers, Family members, retirees, reserve-component troops, civilian employees and contractors worldwide who traditionally read the stories in their command newspapers. AFN stations historically have used ARNEWS articles as readers on their radio newscasts and for story ideas on the TV news. Now ARNEWS partners with Soldiers Magazine and SRTV on a daily basis to provide synergy on covering Army-wide news. ARNEWS reporters focus on covering strategic communications initiatives at Department of the Army headquarters. This includes new policy, pay and benefits, new equipment and new programs emphasized by Army leadership. Coverage of major operations and exercises is primarily based on submissions from the field.