Two narco submarines (also known as low-profile vessels or LPVs) were interdicted by joint US Navy/US Coast Guard teams in the Pacific,  The seizures by personnel abroad the USS Preble on 5 June 2020 and the USS Pinckney on 16 May 2020 involved two separate but virtually identical LPVs. 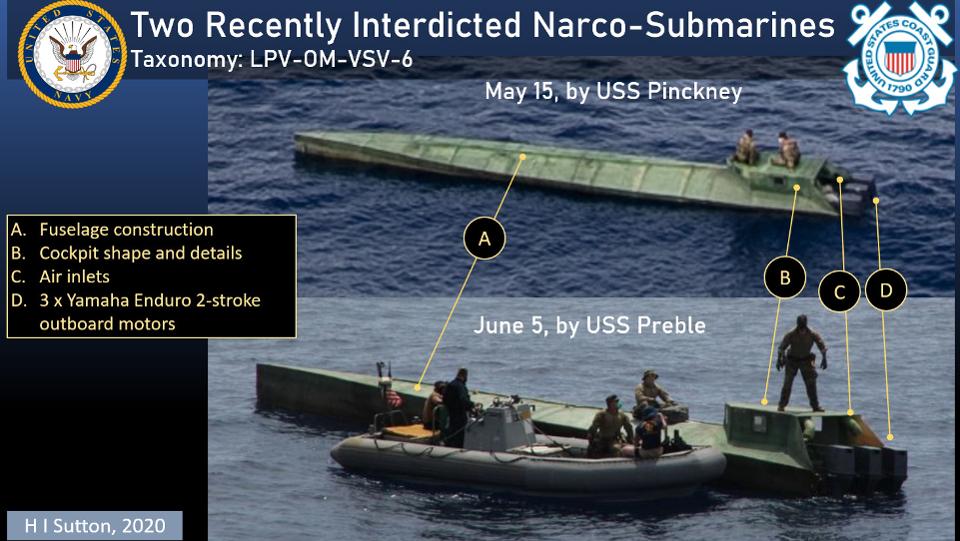 The interdictions are described in an article at Forbes by HI Sutton an analyst specializing in unconventional naval warfare and narco submarines.  Sutton's recent book Narco Submarines: Covert Shores Recognition Guide was reviewed at SWJ earlier this year.  Sutton has developed a taxonomy of narco submarines which are discussed in his article.  The LPVs interdicted in these cases were classed as "LPV-OM-VSV-6 meaning that it is the 6th family of low-profile vessel with outboard motors, using a ‘very slender vessel’ style hull."

Continue to "Why The Navy’s Latest Narco Submarine Seizure Is A Big Deal."

A New Approach to Afghanistan

With the war at a stalemate, we need to seriously consider new thinking outside the kinetic realm if we expect to move the ball forward toward peace without a Taliban victory.

Tyranny of the Majority: U.S.-fueled Instability in Mexico and the Case for a North American Economic and Security Community

The social contract has been breached in many Mexican states. Instead of rule of law, impunity reigns. Crimes go unreported, uninvestigated, and unpunished.

Preface: This is an unpublished archival document provided for the benefit of SWJ El Centro readers. It discusses spiritual awareness training for U.S. law enforcement pertaining to the Mexican cartels and gangs. A Los Angeles Police Department (LAPD) officer who attended this training in the City of Industry was able to clear a murder case based on information he received during the training. U.S. Marshal Almonte, since May 2011, has testified in Federal Court four times regarding the use of these “patron saints” by Narco traffickers. While the Marshal is now reducing the amount of training sessions provided, due to the increase in requests from Assistant United States Attorneys to testify in Federal Drug cases, he would like to emphasize his availability to U.S. law enforcement officers if they have any questions pertaining to these “patron saints” or the artifacts recovered which are associated with them.

The National Latino Peace Officers Association (NLPOA), North Los Angeles County Chapter, in cooperation with the California Narcotic Officers’ Association (CNOA), the Los Angeles City Attorney’s Office, the United States Marshals Service, and additional law enforcement agencies sponsored a major training course on 17 May 2011 in Industry Hills, California. This day-long course was conducted by Robert Almonte, United States Marshal, Western District of Texas, and focused on the topic of the Patron Saints of the Mexican Drug Underworld. Over 500 law enforcement officers from Southern and Northern California, Nevada, Arizona, and Hawaii attended the course that was preceded by a color guard, the singing of the national anthem, and a police chaplain’s blessing. Added bonuses to the training were the attendance of actor Erik Estrada who is also a reserve police officer and an NLPOA member along with strong corporate sponsorship by local businesses supportive of law enforcement.

This restricted law enforcement training course contains extremely graphic and accurate material that pertains to the brutality inflicted by the Mexican cartels against each other, to those that oppose them, and even on innocent bystanders. The training consists of a lecture that utilizes a slide show of images and text, incident videos and news reports, and crime scene photos, along with a large table display exhibiting paraphernalia such as statues, candles, prayer cards, and other iconitry. The course includes an overview to the drug wars taking place in Mexico, an introduction to common cartel tactics, a discussion of cartel forms of violence, and an in depth analysis of the “saints” and spirits that drug traffickers utilize—via prayer and petition— to protect themselves from U.S. law enforcement. These spiritual entities include San Simon, Jesus Malverde, Juan Soldado, Santa Muerte, and many others not normally discussed.

This unique course is ideal for patrol officers, law enforcement personnel assigned to highway and border check points, detectives, intelligence analysts, and crime scene investigators. The course is both professional and practical in nature, has a very strong officer safety component running though it, and fully maintains the attention of the audience. It is definitely delivered in a ‘boots on the ground’ manner derived from Almonte’s field experiences and personal charisma. He has over 25 years in law enforcement with the El Paso Police Department, with most of his career spent on the front lines of the drug war. The training is further augmented by Almonte’s extensive field research conducted at narco-shrines in both Mexico and the United States, personal interviews of those involved in the honoring of legitimate and worship of illegitimate saints related to the drug trade and other criminal activities, and his ongoing consultation with members of U.S. law enforcement throughout the country concerning recent narcotics cases. 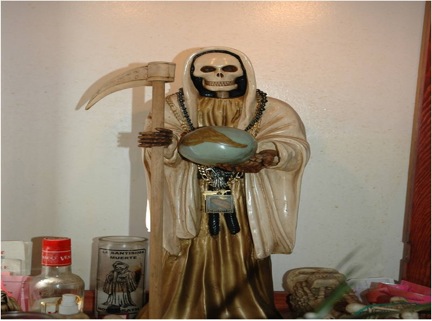 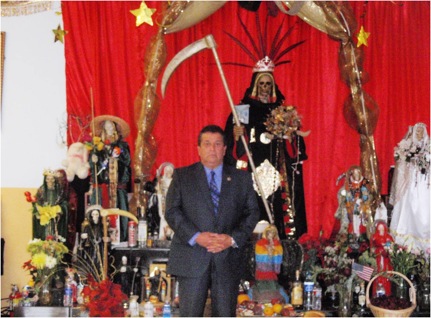 Major themes and lessons learned from this training course include:

• Providing the warning signs of what to look for in order to heighten officer awareness of the situations that they may find themselves in when facing Mexican drug traffickers.

• The notion that ‘smuggler superstition’ often results in ‘police suspicion’ with some very major drug busts resulting as a consequence.

• Patron Mexican cartel saints and spirits may be found in various combinations and in strange item pairings such as with ‘Scar Face’ movie posters and other very common images.

• That many worshipers of the unsanctioned saints—such as Juan Soldado (Patron Saint of Illegal Aliens) or Santa Muerte (Saint Death)— and especially those who honor the Catholic saints of last resort (e.g. Judas Tadeo), typically do not engage in criminal behavior.

• The interrelationship of probable cause and preponderance of evidence as it relates to the use of legitimate and illegitimate saint icons and imagery in the possession of drug traffickers.

• Explanations of candle and sympathetic magic, cleansing, and other rituals and spells and the differences between witches and healers in Mexican folk religion.

• The fact that the instructor has great depth of knowledge and provides many nuances and subtleties concerning the patron saints of the Mexican underworld that cannot be found anywhere in written reports and stories published on this topic.

It is suggested that officers who may benefit from this training should seriously consider taking it when it has been scheduled for their operational area. Generally this training is well broadcasted in advance by the hosting agencies with course signup information posted at law enforcement training websites. For further information regarding this subject matter, you can contact U.S. Marshal Robert Almonte at 210.271.2525.

On Wednesday, January 9, TBI Director David Shirk provided a briefing to the U.S. Northern Command (NORTHCOM) on recent developments in Mexican security. The briefing took place at NORTHCOM's facilities in Colorado Springs and included high-level analysts from the Department of Defense and other U.S. government agencies. The title of the briefing, "The Drug War in Mexico: U.S.-Mexico Security Challenges in 2013 and Beyond," provided an overview of the recent findings of the Justice in Mexico Project, sponsored by a generous three-year grant from the John D. and Catherine T. MacArthur Foundation. Specifically, the presentation included new data from the institute's forthcoming report on drug violence in Mexico, as well as a discussion of Mexico's changing security context under newly inaugurated President Enrique Peña Nieto. The presentation used for this briefing is available in PDF form.

Is Chicago on the Road to Becoming an American Ciudad Juárez?