“Ninety percent of the war will be fought on the Information Terrain.”

Zawahiri’s 2005 missive is particularly relevent this week as hostilities broke out in Gaza between Israel and Hamas.  This fight is already different from any that have come before between these two adversaries, and a quick examination of the opening salvos may tell us a lot about our own next future conflict.

When Hamas launched rockets into Israel, Tel Aviv responded by going after Hamas miltiary commander Ahmad Jabari.  He was certainly a likely target for the Israeli Defense Force (IDF) – what was unusual was how the IDF Tweeted his demise to the world literally as the assault took place. They also Tweeted video of a launch site next to a mosque, showing the mosque remained undamaged by the precision strike.

So consider for a moment the consumption of war in Gaza.  Only a handful of days into the conflict and we’ve been forcefed bucketfuls of information by mainstream and social media.  Israel learned during the Gaza struggle four years ago that the story of the conflict (read: consumed information) can be more important to the world than the conflict itself.  Get ahead with the story and you are ahead in the conflict.  That is what we saw Israel do this week.

Israel updated its approximately 100,000 Twitter followers at @IDPFspokesperson as soon as the attacks on Gaza began.  They reported the conflict first.  My college martial arts team was always counseled that if we ever had to use our skills in a real streetfight, the first thing we were to do when it was over was call the police.  Why?

Because authorities favor the initial reporter who, even if victorious, is typically considered the victim. With Gaza, world opinion is the authority Israel wants to view it as the victim - before Hamas’s all too predictable pictures of alleged victims are flashed around the world.

The Map is Not The Territory

Zawahiri’s phrase, though catchy, is misguided.  He may have mapped out his battle plan, but ‘the map is not the territory,’ (a synonym for terrain).

The Polish-American scientist Alfred Korzybski first crafted this phrase in a paper he wrote for the American Association for the Advancement of Science in 1931. He was describing the relationship between an object and a representation of the object, using the analogy of a geographic territory and a corresponding map.

‘The map is not the territory’ describes his view than an abstraction derived from something was not the same as the thing itself.  A map is a representation, but people often confuse representations of reality with actual reality.  Zawahiri did this in 2005.  The information terrain is not a battlefield.  Rather, information is a weapon on the new battlefields.

In 2006, Yahoo.com financed a study to see how consumers make buying decisions. Like Zawahiri, they were trying to frame information using the analogy of a road map. Both, for very different purposes, were trying to grasp how an ‘average’ person’s decision making was changing in the modern age. Yahoo’s study provided objective insight that Zawahiri could only theorize on.

Yahoo focused not on the what but rather on the how.  How do people arrive at the decision to buy one item over another, one brand over another?  They found four broad categories of decision making patterns based on the type of information required:

In a few brief pages they broadly characterized methods of buyer decision making.  But information should be thought of as the vehicle traveling on certain roads, not as the roads themselves.  As such, the terrains involved have a large impact not just on how we get there, but also when.

As I’ve noted previously, all people traverse three basic terrains: the personal, digital, and spatial.  Personal terrains are our relationships, from our best friends to our weird cousin Ernie. Digital terrains are our various social media links, from email and iChat to Facebook and Twitter.  Finally there are the spatial terrains, the physical proximity to the people we know and communicate with  These terrains exist simultaneously around us every day.  That’s how we should examine Yahoo’s study, as terrains surrounding us like a clock.

When we examine Yahoo’s models we notice something important.  Time is a critical but largely overlooked aspect of decision making.  But time impacts decision making in a myriad of ways, sometimes to our benefit and other times to our disadvantage.

If we plot Yahoo’s study onto this time-oriented terrain map, note how compressed time becomes as information transitions more from the spatial to the digital terrains. Decision making becomes accelerated.  Decisions are made with information that is less likely to be vetted in the traditional sense.  This changes the dynamics of how we think and believe in ways few could have predicted a few years ago. 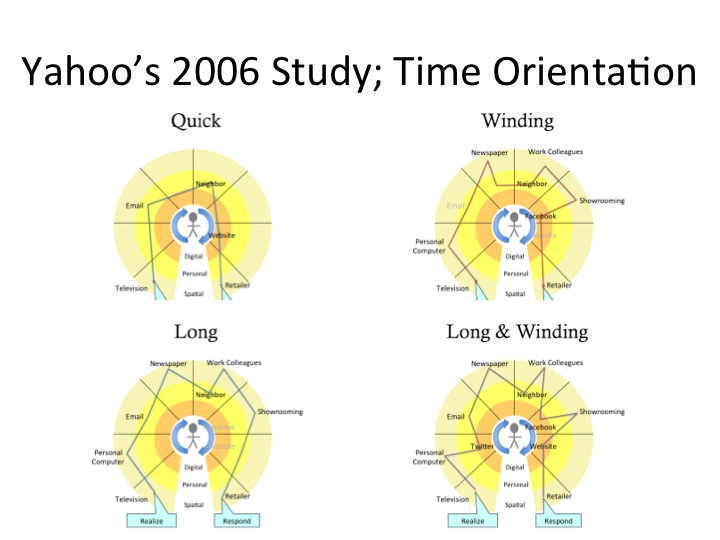 Flash forward to 2012.  Now, this same realize, research, and respond structure can exist entirely in the digital terrain.  As a result, it moves much faster than it ever could have previously.  Though Yahoo was focusing on purchasing behavior, these same characteristics reflect virtually any kind of decision making, from who to vote for, what to believe, and a myriad of other decisions we all make every day.

A single news item from the web can lead to a cascade of Internet sources for additional information.  Once a person’s mind is made up they can then post their opinion or news item to a blog.  This potentially becomes the information trigger (realization) for someone else, and the entire process begins anew. 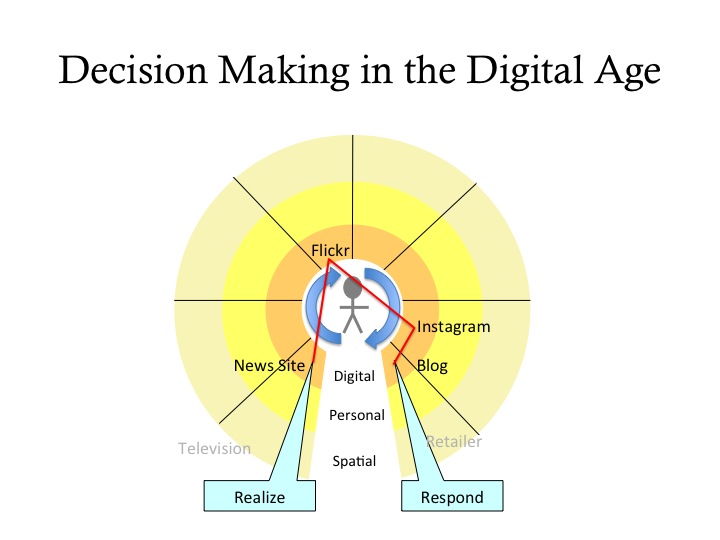 What Could Have Been, What May Still Be

Afghanistan has reminded us that insurgency is the bloodiest of all conflicts.  The tables are turned; rather than some overseas battlefield, combat takes place in the backyard of both the attacker and the defendant.  Armies accustomed to distant clashes with standoff weapons find the casualty count much higher when the tallies of ‘ours’ and ‘theirs’ are contained in a single column.  It’s a reminder that a nation is a social construct, not a territorial one.

Israel, Gaza, and the West Bank are territorial constructs, but the people are a unique multidimensional mix of race, religion, language and ethnicity social constructs. But with combatants on both sides using social media to deliver information weapons to the outside world, we can hope decision making will be done much quicker than in previous fights.  Including the decision by both sides to stand down.

GigaOm senior writer Mathew Ingram said, “If the Egyptian government had been doing what the IDF is doing during the Arab Spring, it would have been a very different picture.”  He noted that armies and governments have used radio broadcasts and other tools for influence campaigns many times, but “what changed is the reach and speed” of social media tools. Clearly, Israel chose some time ago to design a time based strategy that would use these tools.

TJ Waters spent four years as a co-team chief at U.S. Special Operations Command Headquarters.  Prior to this he was a Senior Counterintelligence Analyst for USCENTCOM and an Intelligence Officer for the Central Intelligence Agency after a successful corporate career. His CIA memoir CLASS 11 was published by Penguin Putnam and remains # 2 on the CIA’s list of recommended reading for new employees.  His two other nonfiction books on intelligence, HYPERFORMANCE and PRIOR TO THE SNAP, are popular with military and academic readers.  He has appeared on Fox News and TraderNation, and quoted in The USA Today and The Wall Street Journal.  He resides in St Petersburg, Florida.