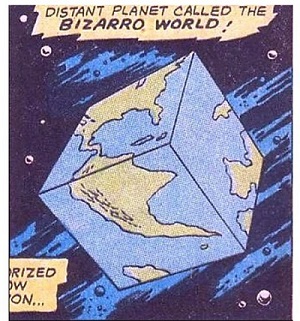 The Bizarro World Figure 1 is an alternate reality where things appear opposite or slightly different than in the real world. As a result, interactions and their effects are contrary to real world patterns and expectations. In this world, societies and institutions change in a short amount of time. For instance, military force is only used to create conditions for political settlements and long-term policy revision. The historical memory of complex adaptive systems is a primary consideration for enduring activities like conflict resolution and cooperation in the Bizarro operational environment Figure 2. 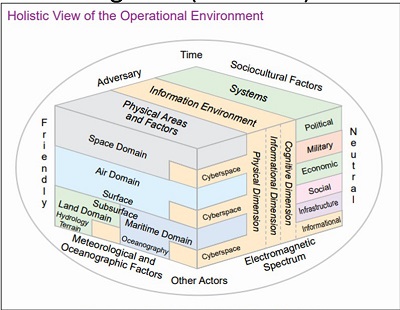 This assessment has three objectives. First, to describe the Bizarro World and Bizarrotan scenario. Second, to conduct center of gravity (COG) analysis on the two main state actors Nari and Malanda. Finally, to develop a strategic narrative for future major operations and campaign planning.

In this case, the Bizarro World is a setting for alternate approaches to political change, strategy and operational art. Additionally, the setting accounts for the unintended consequences of flawed strategy. If political settlement courses of action are not assessed and enabled early, armed conflict transitions to protracted social conflict along with the system’s feedback loop. When this happens the complex adaptive system’s memory is not affected. This type of conflict is not only the most complex to control in the competition continuum, but also affects both regional and international actors directly and indirectly. The real world competition continuum consists of cooperation, competition below armed conflict and armed conflict in a mutual causality model. The mutual aspects are cooperation and conflict. Competition is the friction between the two activities. A Bizarro version of the competition continuum is used later as a critical planning tool for the scenario.

Please note some terminology has been changed for real-world audience understanding. For example, since things are often opposite in Bizarro World, special purpose forces are referred to as “ordinary purpose forces (OPF)” in Bizarrotan. These forces are both elite organizations and critical requirements for a variety of state and non-state actors.

For example, during military positions of relative advantage, asymmetric threats are both low priority and too complex for targeting authorization. Therefore, law enforcement is overwhelmed and proxy actors transition to an insurgency and converge with other malign actors in the region. This prolongs the conflict and operation’s end state, which is simply addressed as “facilitating a safe and secure environment and redeployment”. Ensuring long-term mission success requires linkage of military ways and means to political ends. In the short-term, however, phased joint combat operations based predominantly on military activities fail to create these linkages.

Next, since exercises do not fully realize second and third order effects of complex interactions, transfer to civil authority activities are often neglected and underestimated. As a result, the conflict is never controlled because armed conflict or “violent politics” never transitions to political reform. These practices also perpetuate bad habits by mirror-imaging current conflict campaign plans that place governance considerations last.

Additionally, non-conventional threats like super-empowered individuals, proxy forces, and susceptible populations like internally displaced persons and ethnic militias pose a significant asymmetric threat. If the exercise neglects these threats or combinations thereof during deterrence, seizing initiative and dominating activities, these actors converge into a long-term problem. This is partially since these actors are part of the system’s historical memory. As such, they support deniable state involvement and the continuation of animosity. Moreover, these actors can also influence the potential for both political violence and “freezing the conflict”. Prioritizing these considerations in strategic level guidance plus follow-on operational and tactical level planning is critical.

Next, the scenario uses a modified version of the real-world competition continuum to highlight the fallacy of stability campaigns led by military operations and fluctuating occupation. The Bizarrotan’s strategic end state is to control armed conflict. The strategic objective is returning systems to competition below armed conflict with a competitive friendly advantage based on multilateral cooperation and isolation of the adversary. To reach this objective, critical civil authority conditions must be met when system interactions start to change from competition below armed conflict to armed conflict. This is called the “Red Zone” in Bizarro World. For example, the “Bizarro Square” Figure 3 represents the true nature and character of the Bizarro World. As such, this tool influences the development of the strategic end state by comparing opposites and opposites of opposites. The square emphasizes the complex relationship between state and non-state actors in the competition continuum and their COGs. Additionally, COGs exist at all levels and are physical entities capable of achieving the end state. They wield power by manifesting ideology plus other intangible aspects of the organic whole. 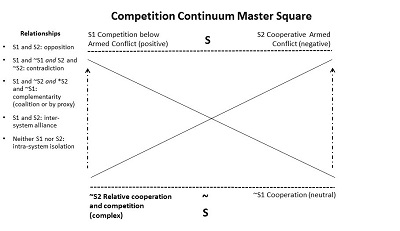 Furthermore, time is relative to the systems interacting in the continuum. Shifting to competition from armed conflict relies on concentrated military operations to reach points of relative advantage. Subsequently, Bizarro World conflict is high-intensity and short duration. This is because long wars have significant geo-economic consequences for belligerent actors when coalitions isolate them in the international community. Historically, isolation has led to “Gray Revolutions” through civil resistance. Power resides with the people in Bizarrotan through a phenomenon called involuntary militias where false narratives are dragged into the light and leaders are overthrown.

These conditions manifested after decades of political, economic, and social (ethnic) grievances on both sides of the border. While Nassians are the majority ethnic group in Nari and North Malanda, they are a minority ethnic group in the whole of Malanda. Ethnic Nassians in Malanda feel disenfranchised. This minority group does not trust the Malandan government due to perceived discriminatory redistribution practices within Malanda and perceptions of negative economic union effects. Furthermore, lack of access to essential services also contributes to Nassian government mistrust.

The following section includes COG analysis for Nari and the Malanda coalition. COGs are targeted directly or indirectly to achieve desired effects and consolidate gains. Critical factors (capabilities, requirements, and vulnerabilities) are also targeted to accelerate destruction and cascading failure of the adversary’s systems. Other aspects of COG analysis include compressing efforts into the fewest possible actions.

Center of Gravity: Conventional and proxy forces that “claim” Northern Malanda and subsequently destabilize the region.

Center of Gravity: Coalition and Malandan government grant of semi-autonomous defense and governance.

Lastly, the scenario manifests COG analysis to develop the exercise’s strategic narrative. This strategy relates to both national strategy and operational-level activities within the theater. Furthermore, it emphasizes short-term military and long-term non-military objectives in a concise vision.

In accordance with collective defense, the coalition defeats Nari in armed conflict. The objective of dominating armed conflict is three-fold. First, the coalition must defend, but also enable semi-autonomy to North Malanda and counter subversive Nari elements in the country. Second, to reintegrate susceptible populations in Malanda. Thirdly, to enable policy reform. All three objectives require disruption of transnational organized crime and regional sponsors through law enforcement activities and international sanctions. Enduring cooperation by all unified action partners is necessary during long-term defense as well as in creating political and economic incentivizes in the region.

The strategic guidance includes both adversary and friendly critical vulnerabilities for direct and indirect targeting and limits military interactions to one concentrated joint phase (dominate). It also emphasizes the human domain that includes diverse human network engagement and provides viable alternatives to influential, susceptible and vulnerable segments of the affected population. Belligerent and malign actors are dislocated from their power bases simultaneously, not sequentially in both physical and information environments.

Next, the coalition consolidates military gains by partnering with host nation government and security organizations in Malanda’s capital. The objective of this partnership is to defend both the territory and engage populations through repatriation and incentivizing. These actions remove the Nassian protector’s (Nari proxy force) catalyst for insurgency and use of terrorism. More specifically, the coalition grants semi-autonomy to majority-Nassian northern Malanda and reconciles ethnic Nassian minorities in major population centers in Malanda.

To disrupt Nari political warfare activities, the coalition then focuses on targeting and countering Nari special purpose and legal actors enabling proxy force and non-military capabilities. Malign networks must not have the opportunity to mature, spread, and transition to either protracted cross-border resistance or revolutionary warfare. Legitimate government penetration and transparent policy change measures help ensure that malign networks cannot and do not take root in historically fertile ground.

Effects of the strategic military guidance are increasing both adversary non-cooperatives and friendly cooperatives. These are the tangible agents that manifest isolation and cooperation effects to reach the strategic level competition continuum control.

In the Bizarrotan scenario cross-domain engagement is critical at the operational level while unified action and relative competition continuum control are critical at the strategic level. The scenario uses limited military operations to enable political settlements and long-term policy change. Military force emphasis is placed on Red Zone or “Reverse Gray Zone” operations that occur as armed conflict above competition as opposed to competition below armed conflict. It also encourages opposing worldviews, adaptive reasoning and long-term prediction of relative interactions in the competition continuum.

Finally, the next issue of Bizarrotan involves operational design. Operational design is the first level of synthesizing strategic guidance and implementation. Identifying operational problems and evaluating COGs is required to develop a campaign or major operation plan.

The views expressed in this article are those of the author and do not reflect the official policy or position of the employer, U.S. Army, the Department of Defense, or the U.S. Government.

Victor R. Morris is an irregular warfare and threat mitigation instructor at the Joint Multinational Readiness Center in Germany. He has conducted partnered training in sixteen European nations, with four NATO centers of excellence, and at the NATO Joint Warfare Center. A civilian contractor and former U.S. Army officer, he has experience in both capacities in Iraq and Afghanistan. Twitter: @vicrasta3030