Threat assessments normally involve linking individuals' intentions and capabilities. Indeed, much research has been done on the threat posed by foreign fighters in jihadi groups. However, the threat coming from Western militants in Kurdish groups fighting the Islamic State has been overlooked. And yet, once they have spent some time in one of these groups, volunteers undoubtedly have the capacity to deploy a fairly high level of violence.

Several groups welcome these Westerners. Among the most ideological are the organizations linked to the Kurdish Workers' Party (PKK) movement, such as the People's Protection Units (YPG), the Sinjar Resistance Units (YBS), the People's Defense Forces (HPG), the International Freedom Battalion (IFB) and the Civil Protection Units (YPS). These groups exchange knowledge and combatants according to their needs and the fighter’s level of commitment. To become ‘professional’ fighters and join more clandestine groups such as the YPS and the HPG, foreigners must move from a voluntary status – without any real obligations – to that of a member, which requires extreme devotion to the group and the cause. This broad cause extends far beyond simply fighting the Islamic State: it aims to establish a socio-political project based on Kurdish confederalism, feminism, ecologism and anti-capitalism[i] in Rojava, a region north of Syria. Furthermore, in the midst of all this struggle, the Turkish state – a historical enemy of the Kurdish people – continues to be perceived as a symbol of oppression and state violence.

These organizations have allowed different profiles of foreigners within their ranks. There are, for example, humanitarians, former soldiers, and adrenaline seekers who have joined the cause almost solely to participate in the fight against the Islamic state. But these profiles have become rarer, leaving more room for the ideologues[ii]. Whether they are motivated by the Kurdish cause or by extreme left-wing ideas such as anarchism or socialism, ideologues join the revolution in northern Syria – even though they are often inexperienced[iii] –, in a commitment that goes beyond the simple fight against the jihadis.

The change in combatant profiles is also accompanied by a reinforcement of perceptions against the Turkish state and an increasing resentment from local and foreign activists towards the regime in Turkey, which has been intensifying its bombing for two years on these groups in northern Iraq and Syria.

The presence of ideologues and the growing tension with the Turkish state can evolve into an explosive mixture that could threaten the Turkish state, and even some Western countries. Shedding light on this threat is therefore of utmost importance.

Whether they are adrenaline seekers or humanitarians, several volunteers have stayed with the group long enough to develop a Kurdish identity. This engagement, which can last over a year, has placed them in situations where they have internalized violence from the Turkish regime against the Kurds as a threat to their own identity. This Kurdish identity is sometimes hereditary – some Westerners are from the Kurdish diaspora – thus increasing their sensitivity.  Others were the direct target of Turkish attacks, as was the case for an American and a German, who died in Turkish bombings[iv]. Erdogan’s Regime sees foreigners who fight along Kurds as mere terrorists whom it is justified to kill[v]. In addition to developing a fierce resentment against Turkey, these Westerners blame their own countries for letting Turkey do so.

These foreigners leave a lot of their lives behind when they travel to Syria. In some cases, all ties are severed with their families, while others invest all their savings in this journey. Considering that most volunteers have little to return to, the biographical availability that would enable them to adopt political violence in their country of origin increases. Having been conditioned for several months to hate Turkey, they certainly pose a threat to Turkish interests and elected nationals in the West.

This threat, however, is rather weak, because at this time all volunteers seem to favour democratic means to denounce the situation. If violence ensues, it will either be of low intensity – resulting in agitated demonstrations like the ones we saw in 2015 in Germany[vi] and in spontaneous and emotional acts – or more serious violence, with planned operations in cooperation with Kurdish members already settled in the West. Attacks by Kurdish sympathizers in Europe have already taken place in recent years. For example, in 2008, several violent acts were perpetrated against Turkish official institutions in Austria, France and Finland by suspected members of the PKK[vii]. 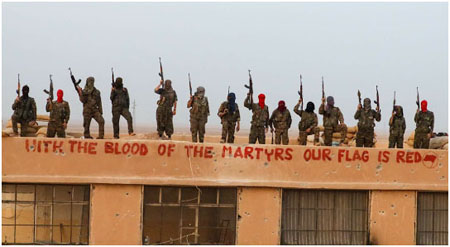 Clandestine groups belonging to the PKK movement, such as the YPS or the HPG, recruit militants who are deeply committed to their ideology. Several Germans, for instance, operate with the HPG in the Kandil mountains[viii], which have historically been the group’s stronghold in northern Iraq.

As for the YPG, they play a more political game, with an openness campaign towards the West. That being said, the group is increasingly trying to attract volunteers whose ideas are compatible with its revolutionary project. Indeed, many anarchists and socialists from Europe and America have joined a sister organisation of the YPG that is more virulent and ideologically committed: the IFB[ix]. For some, there are two interesting characteristics to this cause: it involves an anti-capitalist, ecologist and feminist revolution, and fighting an enemy – the Islamic State – that fits within what they frame as an anti-fascist struggle. The revolution in Rojava is the new federative revolution for radical left-wing movements in the West[x]. Thus, the group recently created an anarchist sub-group, the International Revolutionary People’s Guerilla Forces. The YPG did a similar move in allowing the creation of the international anti-fascist unit to coalesce these foreigners[xi].

Radical circles in the West sometimes operate in a clandestine context where violence is one of the modes of action favoured. Therefore, the engagement of some of their militants in Syria poses a definite threat to Western countries.

Combined with the fact that some of these left-wing organizations already have hostile intentions towards Western states, the participation of their members in a war can only provide them with the capacity to implement their will. For example, in support of the revolution in Rojava, Swiss anarchists in Zurich claimed an attack in September 2016 involving an explosive device against a multinational construction company, which they accuse of maintaining ties with the Islamic state[xii]. Although it is impossible to confirm the veracity of this claim, it is a clear example of the actions that radical left-wing individuals can take within this struggle.

The participation of ideological volunteers in local struggles upon their return may materialize through medium-intensity violence against traditional symbolic targets (finance, military, politics, etc.) and symbols of the Turkish state. Although the likelihood of this violence occupying a significant space in the West is unlikely, this threat remains a consequence of the ideological commitment in the armed struggle of foreigners with radical political agendas in their own countries.

With the increasing Turkish violence against the Kurds in Syria and the anticipated defeat of the Islamic state, this conjuncture could push some volunteers towards a new struggle, carried out by the more clandestine groups within the movement.

Engaged for several months or even years, some foreigners are biographically and cognitively available to change their commitment for a war against the Turkish state. Whether they are radical left-wing activists or Westerners who have adopted a Kurdish sensitivity, individuals from different profiles will one day be offered the opportunity to become members of groups that join forces to fight the Islamic state and Turkey, like the HPG, or even groups that are actively striking within Turkish borders, such as the YPS[xiii] and the Kurdistan Freedom Falcons (TAK)[xiv]. For example, a Frenchwoman volunteer with the women's branch of the YPG, the YPJ, was arrested in Turkey and accused of planning a suicide attack in Istanbul[xv].

This third threat is the most likely and the most important in terms of consequences. After being involved in a movement that strongly advocates guerrilla ideas and tactics, the volunteers would see this NATO member as their main enemy. They are already encouraged to do so by various extreme left-wing organizations in the West: “We, at NYC Anarchist Action, urge all people to raise resistance against Turkey and to support the struggle in Rojava as they carve out a way forward for the liberation of all humanity. [...] Rojava's example will be expanded with action, not words! Rojava will be the graveyard of Turkey and ISIS”[xvi]. Some small groups operating under the IFB have also already declared themselves at war against Turkish troops in Syria[xvii].

But foreign participation in this struggle is not a new phenomenon. When a volunteer decides to professionalize its engagement by becoming a member of the “PKK Movement”[xviii], he joins Westerners who have already been in this clandestine movement for several decades. Indeed, two of them died over 10 years ago[xix].  The road is therefore already paved for Westerners to join the fight. 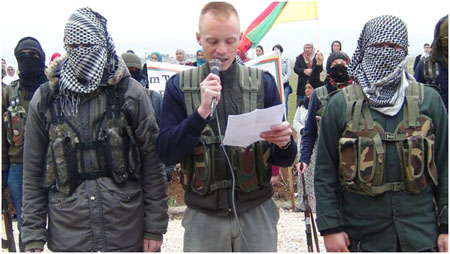 A German member of the YPS calling for international revolutionary to join its struggle in an announcement video, January 14, 2016. Source: Hawarnews.

Whether it comes from volunteers imbued with the Kurdish cause when they return to their own country, extreme left-wing militants involved in violent local organizations, or individuals fitting these two profiles and willing to join the guerrilla against Turkey, the threat posed by foreigners in Kurdish groups is real. It does, however, remain marginal. Hundreds of volunteers have joined these groups, but only a small number will probably decide to use violence not exclusively against the Islamic state.

Western governments must nevertheless prevent their citizens from engaging in this foreign cause. Volunteers certainly have the capacity to use violence—the only thing stopping them is their intent to do so. But they could go from “freedom fighters” to “terrorists” faster than one might think.

[iii]One of them mentioned: “We are not ex-soldiers or militaria obsessives, that's not what motivates us - we're Reds.”; “Syrian war: British volunteers in socialist 'Bob Crow Brigade' prepared to die fighting Isis”, Independent, September 16, 2016.

[vi] “Approximately 25 assailants attacked a Turkish mosque in Bielefeld, North Rhine-Westphalia, Germany”, according to the Global Terrorism Database from the National Consortium for the Study of Terrorism and Responses to Terrorism (START).

[vii] See the list on the Global Terrorism Database from the National Consortium for the Study of Terrorism and Responses to Terrorism (START).

[x] For a non-exhaustive list of radical left-wing groups supporting the cause, see: https://syriainbrief.wordpress.com/2016/08/19/leftist-groups-on-the-syrian-civil-war/

[xii] The claim has been published on Insurrection News Worlwide : https://insurrectionnewsworldwide.com/2016/09/20/zurich-explosive-attack-against-war-profiteers-lafarge-holcim-in-solidarity-with-the-rojava-revolution/

[xiii] Foreigners are already members of the YPS: “Internationalist fighters in Rojava call on youth to join Bakur's resistance”, ANF News, January 14, 2016; Other Western citizens are interested in joining the YPS : https://m.reddit.com/r/rojava/comments/4eizb0/can_people_volunteer_with_the_yps/

[xiv] Metin Gurcan, “The Kurdistan Freedom Falcons: A Profile of the Arm’s-Length Proxy of the Kurdistan Workers’ Party”, CTC Sentinel 9:7 (2016).

[xv] This accusation should be treated with care as this may be an information operation set up by the Regime. “La Toulousaine Ebru Firat condamnée à 5 ans de prison en Turquie”, La Dépêche, November 09, 2016.

[xvi] Quote from a statement on an anarchist blog: https://itsgoingdown.org/nyc-rojava-will-graveyard-turkey-isis/

[xviii] Paul White, The PKK Coming Down from the Mountains (Zed Books, 2015).