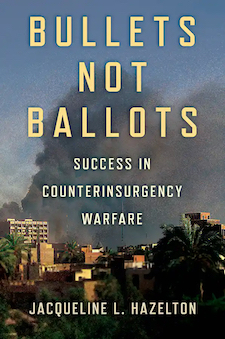 In a paradigm-busting study Jacqueline Hazelton, then at the U.S. Naval War College, takes on the normal explanation for success in counterinsurgency, subjects it to penetrating analysis using the latest available evidence, and comes up with a very different picture than has been the norm in the counterinsurgency literature over the past fifty years. The author, now at the Harvard Kennedy School’s Belfer Center and Executive Editor of the journal International Security, is well versed in the subject matter with a decade of focused research dedicated to it.

Dr. Hazelton approaches insurgency as a form or variant of war: “Counterinsurgency is a competition for power among armed groups. Successful counterinsurgency is one armed group coming to dominate the rest.”(p. 2)[1] From this perspective “The process ends with the insurgents’ and supporters’ will to fight broken. The government need not kill all the insurgents. It only needs to show them they cannot win.”(p. 18) This definition of success shapes her analysis—the measuring stick is not a “better peace” in B.H. Liddell Hart’s famous phrasing or long-term political stability, but victory in the military sense.

Hazelton contends, much of the analytical literature on counterinsurgency misidentified the source of success when it did occur. Reflecting “modernization” theory popular in the 1960s and 1970s, most counterinsurgency theorists used a “good governance” approach. While it was necessary that a nation threatened by an insurgency increase the effectiveness of its security forces through professionalization, better equipment, training and intelligence, and expanded capacity, strategic success came from political and economic reforms which addressed the root causes of insurgency, winning over the members of the public who supported or considered supporting the insurgents to the side of the government. Military success was necessary but not sufficient. The orthodox literature on counterinsurgency, then, relied on the logic of rational choice, assuming that the people of a country supported the side that offered them the best deal. In effect this line of thinking took Mao's theory of insurgency which relied on providing fairer and better governance than the state and transformed it into a theory of counterinsurgency.

Dr. Hazelton contends that the evidence does not validate “good governance” approach. It has dominated the counterinsurgency literature less because it worked than because of who developed the theory and why they did. The bulk of the literature came from Western democracies involved in counterinsurgency support, particularly the United States, Great Britain, and France. In these nations political leaders had to sell their citizens on involvement in protracted, nasty conflicts. They did so by demonizing insurgents, particularly those linked to communism, and by insisting that they were improving the lot of the people in the nations where counterinsurgency took place. Because the history of counterinsurgency was mostly written by outsiders, it reflected their perspective and preferences—selecting data that supported their thesis—rather than what governments fighting insurgents actually did.

Bullets Not Ballots aims to move beyond this, looking both at newly available data and examining the existing historical record in its entirety rather than cherry picking information that supports a desired political point. Hazleton focuses on the cases generally considered successes: the Malayan “emergency,” the Greek civil war, the Philippine conflict with the Huks, the Dhofar conflict in Oman, El Salvador, and Turkey’s conflict with the PKK.[2] She then suggests that compellence theory rather than “good governance” best explains the outcome.[3] The key to success in the cases examined was mustering resources and using them to break the will of the insurgents, not trying to lure away civilian support for the insurgents. Success thus had two crucial elements: the accommodation of countervailing elites so that they did not support the insurgents and, if possible, directly supported the government; and the use of brute force to control civilians, cut the flow of resources to the insurgency, and degrade insurgent forces and resources. Governments successful at counterinsurgency, Hazelton wrote, “bargained with rival elites rather than sharing wealth and power with the masses, to get the cooperation, information, and military capabilities they needed to conduct the campaign” (p. 148).

Dr. Hazelton thus sees counterinsurgency as a form of violent state building rather a political competition for popular allegiance.(p. 15) The historical record, she argues, suggests that “popular support and reforms are unnecessary to reducing an insurgency to an annoyance.”(p. 145) To the extent they occurred, they were often superficial and undertaken after the insurgency had been broken militarily, more to sustain the flow of outside support that to affect the outcome of the conflict. Ultimately “Counterinsurgency success is about power, co-optation, building a coalition, and crushing opposition, not good governance.”(p. 149)

There has been a debate between the “mailed fist” and “velvet glove” approach to counterinsurgency for decades. What Hazelton has done is provide the most analytically rigorous case for the mailed fist. While admitting that her study is intended as scholarly analysis rather than a guide to policy, she is aware of the implications of her conclusion. Outside nations and their publics would balk at counterinsurgency support if they understand what success actually takes. But perhaps this would be a good thing, forcing nations contemplating counterinsurgency support to do so without misconception. Dr. Hazelton makes a powerful case that while involvement in counterinsurgency may be promoting the lesser evil advancing good governance and economic equity is unlikely and unnecessary for success. It is unrealistic to expect a government fighting an insurgency to radically transform a political and economic system that benefits those in power.

For some reason Americans in particular repeatedly overlook this but it is a vital point that every counterinsurgency expert and everyone advising political leaders on potential involvement in counterinsurgency support must understand. Anyone who might someday be in this situation should read Dr. Hazelton’s book so that they understand counterinsurgency for the nasty, brutish thing it actually is.

[1] In a very broad sense the analytical literature conceptualizes insurgency and counterinsurgency as either a variant of war, a variant of politics that incorporates violence, or a form of strategy.

[2] When the US Army Command and General Staff College rebuilt its counterinsurgency curriculum after Vietnam, Malaya and Oman were used as case studies of success and the French campaign in Algeria as a failure.

[3] It is important to note that “compellence theory” has at least two meaning in the national security literature. In some cases, it means the threat of but not actual use of force to create desired political effects (e.g., Melanie W. Sisson, James A. Siebens and Barry M. Blechman, Eds. Military Coercion and US Foreign Policy: The Use of Force Short of War. London: Routledge, 2020. Hazelton is using it in the sense of applying armed force to compel desired behavior.

Dr. Steven Metz is Professor of National Security and Strategy at the US Army War College and a nonresident fellow at the Quincy Institute for Responsible Statecraft. Prior to his current position Dr. Metz was with the US Army War College Strategic Studies Institute serving as Director of Research, chairman of the Regional Strategy Department, research director for the Joint Strategic Landpower Task Force, director of the Future of American Strategy Project, and project director for the Army Iraq Stabilization Strategic Assessment. He has also been on the faculty of the Air War College, the US Army Command and General Staff College, and several universities. He has testified in both houses of Congress and spoken on military and security issues around the world. He served on the advisory panel for the Secretary of Defense Strategic Portfolio Review for Close Combat Capabilities, the RAND Insurgency Board, the Senior Advisory Panel on Special Forces—Conventional Forces Interdependence, and as a nonresident fellow at the Modern War Institute. Dr. Metz is the author of Iraq and the Evolution of American Strategy and many publications on strategic futures, insurgency, military strategy, and defense policy. He is currently writing a book on the future of insurgency.