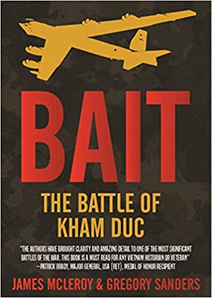 This gripping, eyewitness narrative and unique, deeply researched analysis of one of the least known large battles at the height of the Vietnam War radically contradicts all the other misinformed and misinterpreted accounts of it. This book is well written containing extensive end notes to backstop assertions. Students and other readers who are not conversant with the War have also been covered with a chapter on the North Vietnamese Army (NVA) and another chapter on North Vietnam’s strategy of making and continuing war in the South.

Followed by detailed explanations (also with maps and diagrams) of Kham Duc and the men defending it in May 1968 (that included B-52 and tactical aircraft which is also described in detail), you’ll find yourself there during the three-day battle outnumbered 3-4:1.

Le Duan had failed miserably to take Khe Sanh and tried to redeem himself by eradicating Kham Duc (and the Mike Force camp five miles away) by sending the 1st Viet Cong Infantry Regiment (though manned mostly with NVA troops) and the 21st NVA Infantry Regiments of the 2nd NVA Infantry Division and supporting elements to the area.

Adding to the confusion of battle is this fact that ill-trained officers, changing key designators without notifying everyone, and a lack of plain common sense served to only put everyone at-risk.

Air Force fixed-wing aircraft and Army and USMC helicopters evacuated the defenders of Kham Duc and Ngok Tavak. Located 45 nautical miles (nm) from Chu Lai (the headquarters of the 23rd (Americal) Division), 15 nm from the Laotian border, and positioned just north of the unmarked I-II Corps’ demarcation line, even these aircraft depended on the weather, which was often bad.

The battle of Kham Duc remains generally unknown, but it has all the elements that will make you shake your head in wonder and think it couldn’t be true. In addition to a dramatic, detailed account of the combat by the resident leader of a top-secret Special Forces recon-commando unit, the book places the dual battle of Kham Duc-Ngok Tavak in the geopolitical and grand strategy context of the war in May 1968 on the eve of the first Paris Peace Conference.

Both authors have master’s degrees in history, so it isn’t surprising that it is well documented. Better still is the fact that one of the authors was a Special Forces officer who took part in the battle and the other was an Intelligence officer a few miles away who later saw the reports of what had transpired prior to a combined U.S. and ARVN operation in this same area a couple of years later.

Despite the “popular” historians and Ivy League professors, this book is another example of history best told by those who lived it. It is also highly recommended for both Vietnam War historians and veterans.