SWJ Book Review – ‘Any Place, Any Time, Any Where: The 1st Air Commandos in World War II’

SWJ Book Review – ‘Any Place, Any Time, Any Where: The 1st Air Commandos in World War II’ 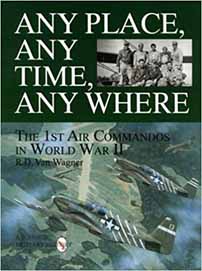 Operation Thursday is not as well-known as other operations in World War II, but it should be. R.D Van Wagner, the author of, Any Place, Any Time, Any Where wanted to ensure that the 1st Air Commando Group receives the historical attention and credit the unit deserves as the foundation of today’s Air Commandos. Van Wagner’s motivation to write this book came from his father Fred H. van Wagner, who participated as an airman, in Operation Thursday and subsequent operations during World War II. The author studies the environment and circumstances that led to the creation of the 1st Air Commando Group, and the execution of the first Allied aerial assault in Burma on 5 March 1944.

Van Wagner divides his book into 15 chapters. First, he examines Japan’s Prime Minister Hideki Tojo’s motivation to take control of Burma, which was occupied by British forces in December of 1941. The author details the unforgiving terrain in Burma, and the strategic advantages it offered the Japanese forces. He then describes how the Japanese took control of Burma and forced the British forces to evade into India. He goes on to describe British Colonel Orde C. Wingate’s then-novel idea of long-range penetration into enemy territory, utilizing resupply airdrops behind enemy lines. This concept allowed British troops to carry less equipment making them more agile, and harder for the enemy to locate. Wingate was able to validate his concept before retreating into India. Van Wagner highlights how those new concepts made their way from British Prime Minister Winston Churchill, to U.S. President Franklin Roosevelt, and then onto U.S. Army General Henry H. (Hap) Arnold, Commanding General of U.S. Army Air Forces.

The author identifies General Arnold as the father of the 1st Air Commando Group, and rightly so. He describes how Arnold took Wingate’s idea of a long-range penetration unit and developed it into a fully self-reliant organization. He explain’s why the general appointed two specific pilots, Lt.Col. Philip G. Cochran, and Lt.Col. John R. Alison, as co-commanders. The reader will learn how these two turned Wingate’s and Arnold’s ideas into a new way of fighting. Their mindset shifts from the expected norms of needing paperwork to complete tasks, to a mission focused and do the paperwork later type of mindset. This mindset is what allows Cochran and Alison the ability to accumulate all the necessary equipment, aircraft, and troops needed for Operation Thursday in just thirty days. Some of the aircraft selected had never been seen in combat before, like the experimental Sikorsky helicopter. These new technologies, ideas, and equipment will lead to a new way of training and fighting.

Van Wagner expounds on the training and significant events that led up to, during, and following  Operation Thursday. He obtains these details from a mixture of official records and first-hand accounts taken from the men of the 1st Air Commando Group. The author narrates the March 1943 operation chronologically. During Operation Thursday, the 1st Air Commandos were able to fly over 200 missions placing over 9,000 men behind Japanese lines. The specifics of the operation are given from the Air Commando point of view. The author also covers subsequent operations, highlighting the success these new tactics had in Burma, and how this unorthodox method of fighting led to success for the Allied forces. This 6-month deployment turned into a two-year multi-operational campaign, ultimately resulting in the Allied forces retaking all of Burma by 3 May 1945.

The author’s ability to incorporate historical maps, photos, and official records allows the reader to see a clear picture of each operation. These small but interesting details about aircraft and the aircrews’ personal stories bring the book to life, allowing readers to place themselves in the battle with the Air Commandos and Col. Wingate’s men. There are also intriguing particulars like the first-ever helicopter rescue and air command and control procedures. These tactics, and original thinking can be seen as the foundation of today’s Air Commandos tactics and procedures.

Joe D. Scobey is a United States Air Force Air Commando, who has served multiple tours in Iraq and Afghanistan as a Special Mission Aviator. He is currently a candidate for an M.S. degree in Defense Analysis at the Naval Postgraduate School in Monterey California.