During my (CPT Pete Escamilla) two deployments to Afghanistan, I witnessed a significant shift in the mission.  My first experience was a kinetic, enemy focused tour that involved patrolling and interacting with the local populace.  My current deployment is focused on the Afghan National Security Forces (ANSF).  I was assigned to a Security Force Assistance Team (SFAT) as the team’s executive officer.  The “advise and assist” mission exists in a complex environment that focuses on the need for a trusting relationship between the advisors and the indigenous security force while understanding the ever-present threat of an insider attack.  This article will describe my unit’s approach to counter the increased number of ANSF attacks against ISAF through training and validating a security force (SECFOR) of trained individuals, or guardian angels, able to defuse a situation by their presence as well as prosecute hostile actions with lethal force when required.

Throughout this article many of the principles and Tactics, Techniques, and Procedures (TTP) are basic to Infantrymen but modified to fit the SFAT environment.  Afghanistan presents a number of challenges that require us to adapt and incorporate innovative ideas.  My unit’s approach to securing advisors while not impeding their mission helped facilitate a successful development of our partnered force.  During the train-up and deployment, we remained mindful of the need for the advisors to interact and establish rapport with their counterparts while not compromising security or exposing SFATs to unmitigated threats.  Our hope is that these lessons learned will inform other advisor teams as they train up at home station for this important mission.

While planning training to address the unique SFAT environment, we quickly assessed the personnel we selected to insure individual advisors would be the foundation of our success.  The SECFOR is composed primarily of riflemen, or guardian angels (GA), tasked with securing advisors while not detracting from the development of the indigenous force.  A Soldier’s personality is a key component in their ability to serve as a GA.  The importance of personality, when it comes to selecting GAs, cannot be underestimated.  The relative proximity GAs have with ANSF personnel along with the need to understand the culture as well as possess patience, a level headed demeanor, and the ability to quickly transition from “safe to semi” are vital to the GA’s success.  We selected each GA based on their maturity, ability to focus, willingness to make split second decisions, and visual acumen.  Our selection trends showed the majority of our GAs were senior E-4s and E-5s with previous deployments.

Once we identified the personnel best suited for the GA mission, we executed a deliberate training plan to hone their skills for the deployment.  The training involved Close Quarter Marksmanship (CQM) ranges to build confidence in accuracy, Situational Training Exercise (STX) Lanes to test and build confidence in decision making, and professional development discussions covering historic Green on Blue incidents to build institutional knowledge. Training became more refined and creative as we completed our Relief in Place (RIP).

However, the focus remained on developing endurance for long meetings, decision-making for quick and accurate reactions to a hostile threat or intent, and the mental sharpness needed to assess and re-assess the environment.  We found that we had to constantly discuss the relevancy of our TTPs.  Today’s meetings often differed slightly from yesterday’s meetings and required us to further refine our approach for tomorrow.

Based on our experiences in Afghanistan we built our training plan, both prior to and during the deployment, around the following:

a.  Glass House Training:  Our training had to take into account the daily interaction we would have with environments and personalities.  Using measurements of rooms, hallways, walled compounds, number of windows, doors, tables and chairs from ANA facilities, we created glass houses and sketches to rehearse infil/exfil, active shooter drills, and CASEVAC procedures.

b.  Guardian Angel Stress Shoot:  During the deployment, we built a stress shoot to build GA’s confidence in their ability to quickly and accurately acquire targets.  The training included scenarios requiring CQM with both a M4 and a M9, CQM transition fire drills, and a GA live fire.  We constructed a modular shoot house to resemble structures we saw everyday.  The modular shoot house gave our SECFOR the background setting to increase the reality of the training and mimic the facilities on our partner’s compound.  Targets with assorted colored shapes were added to simulate both friendly and hostile forces.  The targets were placed in various angles and positions within the shoot house to force the GA to move to an available position, establish a steady platform, and engage with accurate direct fire.  We incorporated a recording of an actual Afghan National Army (ANA) Battle Update Brief (BUB) to add stress and realism to the exercise.  In addition to ambient noise, the GA had an earpiece connected to his Multiband Inter/Intra Team Radio (MBITR) broadcasting typical chatter.  To enhance the realism of the training, GAs were issued a magazine with an undisclosed number of rounds to force the firer execute a magazine change, perform reduce stoppage drills, and transition from one weapon system to another.  The range safety called out shapes and colors to the GA through the MBITR to force fire discrimination.  Once complete, the range safety asked the firer to recall the firing iteration and identify hits on colors and shapes against the target order.

The background, the noise, the distractions, and the internal struggle to remain vigilant validated our emphasis on personality traits.  While absorbing every internal and external disturbance, the exercise presented hostile targets that required immediate prosecution.  Any delay in reacting to the threat, regardless of the ancillary factors, could prove embarrassing in the shoothouse and fatal in a real situation.   One of the biggest lessons we learned was that a GA cannot remain static.  The GA must move often and make adjustments so he can engage targets without hitting friendly personnel.  These micro adjustments allow the GA to get better angles if a threat is identified and must be neutralized.

As described, validating the individual GA is a creative endeavor and the foundation for securing advisors.  Validating the SECFOR requires an equal amount of creativity.  GAs are the centerpiece of the security framework for the SFAT mission.  However, the collective SECFOR must remain as vigilant as each GA and measures must be enforced to maintain the integrity of the entire SECFOR.  Without equal, the most influential detractor is complacency.  The monotony associated with the SFAT mission of daily BUBs, key leader engagements, chi sessions, and synchronization meetings create a sense of familiarity that breeds complacency.  Even the strongest, most attentive Soldiers become bored.  To combat complacency we focused on 5 principles:

a.  Know your Environment.  One of the first steps we took to educate our SECFOR on their environment was to take measurements of all facilities we habitually visited. However, the environ primarily consisted of the human environment.  We developed face cards, similar to baseball cards, for the personnel we routinely encountered.  These personalities were not solely the key leaders participating in meetings with our advisor team, but also the background personnel like the soldier on guard, the soldier serving chi, or the maintenance worker.  Regular quizzes and spot checks helped to reinforce the importance of knowing the environment. 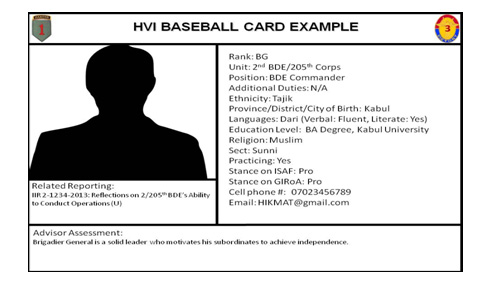 b.  Deliberate Planning.  The SECFOR mission, no matter how mundane, should be planned with the same amount of effort and detail as any other patrol. Ramp Briefs serve as a forcing mechanism to ensure SECFOR Leaders brief vital aspects of the mission. Our SECFOR formatted our mission briefs to address nine key factors as the baseline for our deliberate planning.  The nine factors are:

c.  Identify and Assess Possible Threats.  Identifying threats requires actively scanning for potential threat locations and looking for changes or discrepancies from day to day.  In our efforts to battle complacency, we noticed active scanning was an indicator of an alert GA while a distracted GA’s eyes were focused on the ground or another GA.  When my leaders saw a distracted Soldier, they immediately corrected the distracted individual.  As we continued to make the same correction, my leaders and I soon realized we were guilty of enforcing a standard without first teaching the standard.  We took the time to explain to each Soldier the importance of seeing the terrain through the enemy’s perspective and asking, “if I were the enemy how would I attack a superior force and where would I do it?”  We also explained the importance of detailed terrain analysis to help determine the changes from the previous day or the previous visit.  As the Soldiers began to think like the enemy, we coached them through identifying likely or suspected enemy positions.  The key lesson for the GAs remains that active scanning significantly decreases the enemy’s ability to surprise a vigilant and proactive force.

d.  Scalable Defense/Defense in Depth. Conducting a scalable defense begins with identifying the “rings” of the defense.  Once the rings are identified, the leaders assign responsibilities for each ring. 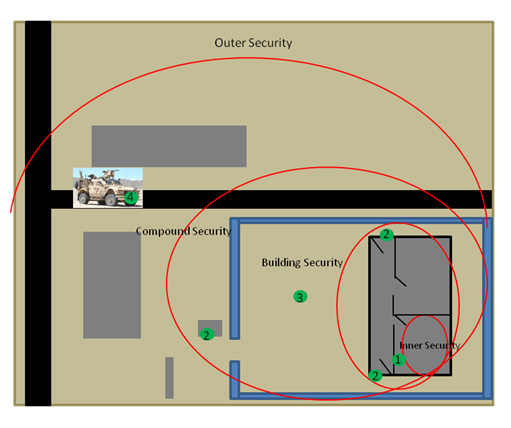 e.  Escalation of Force.  Like the scalable defense, special considerations must be made for Escalation of Force (EOF) Measures. For our Gatekeepers, GAs, and Sentinels EOF steps were as follows given a scenario of an unidentified and unfamiliar Afghan approaching the entrance to a compound currently being used by an advisor during a key leader engagement.  The SECFOR will:

For the GAs, escalations in temperament, suspicious behavior, and aggressive actions are indicators for an impending escalation in force.  The escalation is a quick shift in the environment attributed to an action or the presentation of an object.  The GA is forced to transition from identifying the threat to using a lethal or non-lethal solution to de-escalate the situation.  This transition is more immediate if previous training built the required muscle memory and mentality to assess a threat, identify the target as hostile, and choose the proper amount of force to neutralize the hostile actor.

Many times the Advisor’s interaction with his counterpart will result in a desire to decrease the security posture as a show of good faith.  I discourage such decisions because the GA is placed in a compromising position.  Altering the GA’s security posture increases the time required to transition through each progression prior to neutralizing a threat.  In order to prevent such a conflict, the GA and advisor should develop a pact that lays out acceptable and unacceptable risks. This should be a living document that is tailored for each mission but at a minimum should combine the security requirements and Advisor’s mission.  Some behavior may be tolerated given the circumstances but physical altercations and verbal attacks must be considered hostile.  Ultimately, GAs are responsible for security and make the final decision when presented with confirmed or perceived hostilities.

This article focused on the roles, responsibilities, and requirements pertaining to selecting and training guardian angels.  Soldiers tasked with securing advisors in an “advise and assist” unit must be well-trained and have the temperament to quickly assess a situation and react accordingly.  A deliberate selection process grooms Soldiers with the demeanor to remain effective regardless of multiple distractions.  Proper training techniques ensure guardian angels are confident in performing their given tasks and able to make the right decision.  The six principles of the SECFOR reinforce the leaders, individuals, and collective responsibilities.  The “advise and assist” mission presents a unique security challenge.  Building trust with partners while not exposing advisors to unnecessary security risks is a difficult endeavor.  This article shares the ideas and TTPs we developed that can ideally benefit the entire SFAT community.