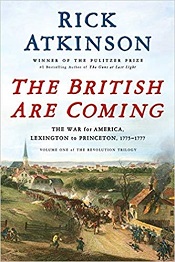 Then what should war be?

The tale of the American Revolutionary War, one of our nation’s most enduring and romantic narratives, goes something like this: overtaxed farmers, blacksmiths, and millhands, yearning for divined liberty, exchange shovels, hammers, and chisels for muskets. What these amateurs lack in materiel they made up for in spirit. Led by sage strategists named Knox, Montgomery, and Washington, this army fights like hell against an organized, trained, and massive military machine.

In his latest work, The British Are Coming, Rick Atkinson does not expose this myth so much as blow it up. His remarkably thorough research reveals a Continental Army that was often hapless, frightened, and under-resourced. It’s often terrified soldiers are led by the ineffectual, the self-interested, and the deceitful. The fact that by book’s end (this first volume of what will be an Atkinson trilogy on the American Revolution covers 1775 to 1777) the rebels have reached a sort of stalemate and have not been defeated across the 13 colonies is due primarily to a series of stunning British miscalculations. Blunders abound on both sides; by shifting perspectives between the rebels and their British oppressors, Atkinson allows the fog of war to serve almost as a character unto itself.

This beautifully packaged, at times compellingly written, sometimes uneven book is a marvel of historical investigation. The source material provides the kind of detail generally lost to antiquity. Through quotes from letters, diaries, and recorded conversations, Atkinson allows the true motivations of the war’s combatants to reveal themselves. What emerges is a picture of a savage battle between two forces with ambiguous intentions.

Although the colonists initially fought for independence, by later winter of 1775 they were fighting at least in part to preserve the institution of slavery. By the time British loyalists, late in 1776, entice American slaves to join their cause and fight against their colonist owners in exchange for their freedom, it is no longer clear which side represents liberty and which tyranny. In a perverse irony, the South Carolina rebels were in fighting shape ahead of the war; this force, galvanized by Washington to fight for the principle of autonomy, was organized and trained to fight off a slave revolution.

War is hell, and our creation war is, in Atkinson’s expert hands, a particularly gruesome version of hell.  Continental soldiers are abandoned by their officers, ravaged by dysentery, and tortured by British captors. In these pages, the reader can hear the cries of the afflicted and feel the terror of the young men facing death by violence or death by painful illness.

Where the book wanes is when Atkinson becomes bogged down in lists.  We do not need to know, for example, that after moving into a temporary home in Manhattan, Martha Washington bought "china, glassware, a carpet, a featherbed, Chinese porcelain teaware, wine glasses….” It is similarly unimportant that the items Benedict Arnold purchased from the late Richard Montgomery included “six silver tablespoons, six silver teaspoons, five tablecloths, three linen handkerchiefs, a powder box, and muff…" The book carries dozens such exhaustive (and exhausting) catalogs. In these moments it feels as if the author is looking to impress the reader with the breadth of his research.  Unlike in the Liberation Trilogy, when Atkinson mixes in detail to color a story, there are moments when the raw facts pile upon one another, smothering the narrative.

Make no mistake: Rick Atkinson is a master craftsman. It is a shame he does not rely on his pure storytelling ability throughout The British Are Coming.

The book opens with a grand celebration British military might in Portsmouth that masks the growing rebellion that will soon threaten the new empire. It ends with Washington crossing the Delaware River and leading the Continental Army to its most improbable victory. In between, the pages blaze with violence and barbarity. Men shriek in terror.  Legs are ripped off by mortar fire.  Soldiers shot in the arm by rifle fire are treated by handsaw amputation. Some die miserable, unglamorous deaths, their bodies dropped in hastily dug holes. Men freeze to death, bleed to death, and starve to death. Soldiers are ripped apart by grapeshot, disfigured by smallpox, and maimed by bayonet. This was a savage war, one in which both sides stopped at nothing to beat down their opposition. A dreadfully vivid scene of rebel imprisonment in horrific conditions on Long Island after Charles Lee’s forces were soundly defeated is an emotional knee capper.

The British Are Coming is the story of war as told by the men and women bereaved by it.  It is the story of the birth of a nation as seen through the eyes of those who struggled it into life. And, it is one that has a particularly urgent message today.  In these divided times, it is critically important that we understand the real motives behind our foundational principles and the infernal struggle to carve out a country free from British rule. War’s horror and its wonder, our unquenchable appetite for violence, and the struggle for sovereignty have lessons for our nation today. The men whose blood wrenched America from its British forebears are speaking to us through one of our finest writers.

Joe Buccino is an Army Public Affairs Officer and a Class of 2020 resident student at the Army War College.  His work has been published previously in Small Wars Journal.