As Protests Continue in the Street, Iraq Reaches a Crossroads

As Protests Continue in the Street, Iraq Reaches a Crossroads

The demonstrations show the strength of Iraq’s people. Will the political class address their legitimate demands? 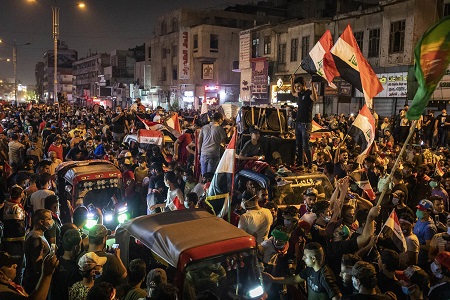 Tens of thousands of Iraqis have been protesting in Baghdad and southern provinces against the failure of the Iraqi government and the political class in delivering basic services, providing jobs, fighting corruption, and more. Iraqi security forces and armed groups reportedly linked to Iran have used lethal force in response to the protests, leaving over 260 dead and over 10,000 injured. As the protests have progressed, demands have expanded to include calls for regime change, the resignation of Prime Minister Adel Abdul Mahdi, early elections, pushing back against Iranian influence, and accountability for killing peaceful protesters.

Protests against the government’s failure to deliver basic services have become an annual, somewhat steadily growing part of Iraqi political life since 2011. But this time, the sustained and growing nature of the protests—potentially the largest since the fall of Saddam Hussein—and the government’s harsh response have put Iraq’s democracy at a crossroads. How both sides respond will be key in determining the country’s future.

Since 2011, successive government efforts to appease protesters have proved inadequate. As with previous protests, the government—spurred on by not only the protests, but also pressure from Shia cleric Grand Ayatollah Ali al-Sistani—has announced what they called “packages” of response, including offering payments to the unemployed; opening up jobs in the Ministry of Defense, including the army; and dissolving provincial and local councils, among other things. But, this has not mollified protesters and could lead to the further militarization of Iraq and undermine its democratic institutions.

Cause for Concern—and Hope

Iraqis, especially Shia, are shocked by the violent crackdown in response to legitimate grievances. Compounding their astonishment was that many Iraqis believed the country’s leadership under President Barham Saleh, Abdul Mahdi, and Parliament Speaker Mohammed al-Albousi was the best it had been since 2003. This shows that Iraqis are standing up against the broader political system that prizes the status quo above all else, not these leaders specifically.

Many feel that the political class simply does not care about them and will not deliver, which was reflected in the low turnout in the May 2018 national elections. Whether it is indifference or incompetence, the disconnect between the political class and the people has been a source of concern for some time. Both Iraqi and external forces that benefit from the status quo are fighting to preserve it and are behind the violent responserepresents a major step backwards in Iraq’s democratic transition and risks taking the country toward further instability.

Looking at the big picture, these protests—and those in 2015 and 2018—demonstrate Iraqis’ growth and maturity in holding their government accountable through nonviolent means, an important element of any democracy. They show a new a generation of Iraqis who are free from the fear that Hussein’s rule instilled. This generation does not feel in debt to Iran, Turkey, and others in the region who sheltered and supported many of Iraq’s current political leaders during Hussein’s rule. Perhaps most importantly, the protests have not been sectarian—the people are collectively demanding a better future.

An Alignment of Forces: Violence or Reform?

Ordinary people, civil society organizations, religious and tribal leaders, and even some political actors in the middle and the south of the country have aligned in these protests. When this happened in Sunni areas from 2012-2014, the Iraqi state lost control and ISIS took over one-third of the country. In the Kurdistan Region, a similar alignment against the Baghdad government existed for decades and continued after 2003, leading to tensions, violent conflict, and post-2003 Kurdish calls for independence.

While ISIS may not be able to find a foothold in Shia communities, violence in the middle and south of Iraq could come from armed groups including those under the banner of the Popular Mobilization Forces (PMF), heavily armed tribes, and ordinary citizens who possess weapons.

Although Iraqis have mixed views about the role of tribal and religious leaders, these leaders could be forces for good by siding with demonstrators, amplifying their voices and protecting them against a further or intensified crackdown. The religious establishment, including Sistani, has an important role to play in calming the people and applying pressure on the government to reform. Although their influence is still relatively high, it has diminished as the people have they shown they are tired of rhetoric and want to see action. That’s why in 2018, Sistani and his representatives could no longer call for calm and asked instead for “controlled anger.” This year, they pressed the government to investigate the use of force and, as a sign of support, staff of the holy Shia shrines in Karbala and Najaf demonstrated on November 7.

Iraq’s young and active citizenry demonstrates the energy of the people and their ability to apply pressure on the state to deliver. But, since the removal of Hussein, there are those—both inside and outside the country—who yearn for a strongman at the helm of a centralized government and do not care about the will of the people.

Iraq’s Council of Representatives (CoR) voted in late October to dissolve provincial councils in a bid to assuage anger over their poor governing performance. Even if these councils have not delivered, dissolving a key component of Iraq’s democratic institutions sets a bad precedent. A better move would be to improve the electoral system and hold officials accountable.

The CoR has also appointed a committee to work on amending the constitution. Since its passing in 2005, political actors across the spectrum have criticized the constitution for being too vague and riddled with inconsistencies. Nonetheless, there has not been enough of a political appetite for amendments. It remains unclear if that will happen this time. Should amendments be made, the process must be done with extreme care in order to make sure it does not undermine Iraq’s democracy or lay the ground for future instability.

Problems notwithstanding, the Iraqi constitution and elected bodies have done the country a lot of good. It is important to not lose sight of that and instead focus on improving governance. The cost of centralization and dictatorship should be on the minds of all involved in the amendments process.

The Question of External Influence

As with previous demonstrations, some have sought to dismiss protesters as pawns of different countries. Anti-Iranian sentiment among Iraqis, even Shia, is likely at its highest points since 2003. Meanwhile, Iran has consolidated its power among Iraqi political parties and in the security, government, and economic spheres.

Turkey and the Gulf states do not have enough influence in the middle and south of the country to be an effective player. Some conspiracy theories proffered by Iran and its allies blame the U.S., Israel, and Gulf countries for what’s happening. These accusations, along with labeling demonstrators as Baathists, are ridiculed by Iraqis and often interpreted as an attempt to give the government license to suppress the people.

Many Iraqis blame the U.S. and the international community for not doing enough to side with the people. But such engagement is tricky: limited support could send the wrong signal and encourage a further crackdown, but too much involvement may also lead to further violent suppression, with demonstrators seen as externally motivated and supported.

It is important for the international community to remain engaged with actors across the political spectrum and use the full range of bilateral and multilateral avenues available to protect Iraqis’ rights to freedom of expression and to protest against their government, help Iraqi civilian and security institutions perform better for the people, and reduce external malign intervention.

A Syria or Yemen Scenario in Iraq

Some have argued that the protests could lead to a scenario similar to what has played out in Syria or Yemen. In both cases, Iran has responded with a heavy hand to preserve its influence and protect its allies. It is important to note some of Iraq’s differences from those countries—differences that could help yield a better outcome:

While these positive ingredients have been weakened in their own ways, collectively they could be leveraged to secure a positive outcome in Iraq. They require a catalyst for them to come together—the U.N., supported by the international community, may be the best available interlocutor to play that role.

There are ultimately two sides in this fight for the future of Iraq: those who seek to preserve the status quo and those who want to change it to something better for the people and free from external control. Neither side seems to be willing to budge and let things go without a fight. While it is hard to predict what’s next, it is clear that the political class of Iraq needs to change its behavior. If they don’t, it could lead to further violence and even the dissolution of Iraq’s democracy.

Iraq has the elements necessary to build a better future. The Iraqi people remain the country’s best hope to propel reform and prevent instability. It is vital that the international community remains engaged and supports Iraqis and their leaders in choosing the right path at this perilous crossroads. After decades of authoritarianism and conflict, Iraqis deserve a better, more hopeful future.