The purpose of this essay is to generate discussion regarding a new way to incorporate near-peer Electronic Warfare (EW) threats into the operations planning process. In my experience, maneuver commanders have been known to focus less on Electromagnetic Spectrum (EM)[i][ii] considerations in a decisive action environment. The root cause of this often boils down to a communication problem: On one side, the information owner must present information which can be difficult to deliver to decision makers in an impactful manner. On the other side, nearly 20 years of COIN operations and the habit of containing EW to a counter-IED role has created an institutional bias regarding the role of EW that must be overcome. EW is often cast aside during planning with the ever-ready catchall of “well, that’s METT-TC dependent.” In other words, we will get to it if it becomes an issue, but I do not see this as having an operational impact. There is little U.S and NATO experience opposing an adversary capable of employing EW measures against a friendly maneuver element. The operational impact has remained largely theoretical. That being the case, EM considerations have largely remained in the purview of the Cyber, Signal, and Air and Missile Defense communities, receiving much less subject matter expertise in battalion level infantry formations.

In order to fight, survive, and win in a 4th Generation Warfare environment, Electronic Warfare needs to be seen as having the potential for a major operational impact. This paper discusses one method to do it- the incorporation of the Electromagnetic Operating Environment (EMOE) into the Modified Combined Obstacle Overlay (MCOO) in order to afford the ground Commander and Staff the opportunity for additional insights that may otherwise not be as accessible.

Electronic Warfare (EW) is now as much a Rifleman’s problem as any Pilot, Network Administrator, or Air Defender. In an EW environment, UAV feeds will be disrupted, smart munitions become dumb at a critical moment, navigation aids shut down or display incorrect data, and the radios and batteries taking up precious ruck space become dead weight. All of this can occur at the time and place of an adversaries’ choosing. There is a very real threat, a doctrinal staple, dedicated to wreaking havoc in the interface of warfighting systems.

The 4th Generation (also referred to as “New Generation”) Warfare Guidebook identifies EW as a key tenant in countering NATO and U.S maneuver warfare, citing the dependence we have on systems.

“The U.S has communication infrastructure down to the four man Infantry Fire Team level and the ability to battle track those formations with almost real-time speed. When everything functions as designed, these smaller formations can achieve much larger effects than their Russian equivalent.”[iii]

While this communication infrastructure is an incredible capability, it also creates significant vulnerability for the commander who relies upon it. New Generation warfare squarely aims to contest this capability. Our adversaries now utilize similar technologies and range of frequencies to communicate, and have designed their EW tools to allow use of these assets while denying U.S the same capability.[iv] In a given Area of Operations, not only will U.S forces combat an enemy in the traditional aspects of warfare, but on an electromagnetic battlefield as well.

The threat is no longer theoretical, and it has implications across all Warfighting Functions. These systems have been utilized in Ukraine so far as to use direction finding signal equipment to target Ukrainian forces for artillery fire, and then later text the unit commander to ask how they enjoyed it.[v] More recently, what could be potentially be the first documented GPS spoofing event occurred in the Black Sea as more than 20 ships reported their GPS location was displaying over 30km off course.[vi] As Russia is the major military hardware supplier to non-NATO forces, encountering EW threats in any near-peer decisive action environment is a certainty. 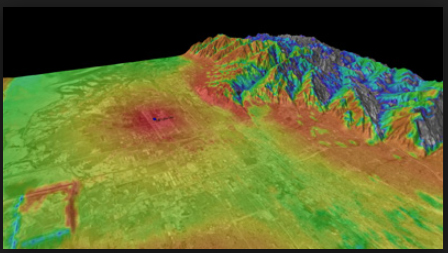 The Modified Combined Obstacle Overlay (MCOO) is the foundational intelligence product. Not only does it graphically depict Steps 1 and 2 of IPB (see Figure 2), but it establishes the framework for what is possible on the battlefield with the resources available to both friendly and enemy commanders. The Electromagnetic Operational Environment (EMOE) is defined as “The background electromagnetic environment and the friendly, neutral, and adversarial electromagnetic order of battle within the electromagnetic are of influence associated with a given operational area.”[viii]

The inclusion of EM topography as a key piece of the intelligence estimate in maneuver operations, such as it is in Air and Missile Defense doctrine, provides the Commander and Staff visual insight into not only the effectiveness of his or her own signal and EM capability, but that of their adversary. Utilizing tools like the Spectrum XXI or SPEED Topographic Manager Module and coverage plots, the ability to graphically predict the performance of specific frequencies in a given AO exists[ix]. Based on how a frequency or range of frequencies propagate, unrestricted, restricted, and severely restricted signal areas (for the lack of a better term) produce an electromagnetic topography which can essentially be considered an EM MCOO. There are several benefits that can be realized by combining this with a traditional MCOO.

Improved SITTEMP Development: The addition of the EMOE to the MCOO provides valuable information when assessing the enemy situation. The Operating Environment juxtaposed with the EMOE and analyzed in conjunction with the known capabilities and limitations of the adversary Order of Battle provides a more complete tool to accurately develop the Enemy Situation Template. This method also aids in the development of quality (in terms of accuracy and justification of selection) Named Areas of Interest (NAIs) for nomination later in the IPB process. When assessing adversary EW assets, no longer is the placement of an enemy unit limited to doctrinal Disruption Zone, Battle Zone, or Support Zone emplacements, range rings, and terrain considerations for specific equipment. The Intelligence Officer now gains the ability to speak more knowledgably to the probability of adversary EW effects on the battlefield based on their assessed disposition. For example, in the coverage plot example above (Figure 1), not only does the built-up population area potentially create mobility issues, but it is also assessed to create the condition for poor signal propagation. If an adversary were to attempt to camouflage specific EW equipment in this area, its effects would be significantly degraded.  With so much investment in this capability, it is highly likely that adversary battle plans are arranged in a manner that maximize EW effects in a decisive action environment. S2 shops need to view and template the AO through this viewpoint as well.

New Key Terrain May Emerge: 4th Generation warfare doctrine is as heavily dependent on EW capability as U.S and NATO forces is reliant upon communication and synchronization assets to execute their operations. Converging the information provided by a MCOO with specific signals coverage may provide the Commander with new insights he or she may not have considered within the AO. An otherwise unremarkable piece of terrain may reveal a marked advantage for specific offensive or defensive EW capabilities.

Generating Intelligence Estimate Buy-In: ATP 2-01.3 and Fort Leavenworth teach that the development of the intelligence estimate is a critical first step during Mission Analysis, and that because each staff function has a particular expertise, IPB truly is a collaborative effort. In reality, the initial scene in most battalion level TOCs after receipt of order is a frantic intelligence shop, while the rest of the staff waits with increasing impatience for the initial estimate so they may begin their task. The electromagnetic topography mentioned above? If produced at all, this product rarely leaves the confines of the S6 shop. Intel products with cross-staff responsibility aid in establishing a working environment of synchronized efforts from the start.

Operational Planning and War Gaming: The MCOO 2.0 will prove useful beyond Mission Analysis. Planners will not only be forced to work within the constraints of the physical environment, but will also have a tool to assess risk and mitigate potential C2 aspects of a particular COA. This tool will also provide a means to better war game proposed communications PACE plans, better anticipate communication gaps, and scrutinize Avenues of Approach and potential Assembly Areas among other operational considerations.

All-Source intelligence professionals already have more operational considerations to assess than they have time to evaluate them thoroughly. Recommending the addition of EM considerations further taxes my fellow colleagues. We can use existing planning tools like the MCOO to assist in defining and exploiting the EM battlefield, we also have staff positions to capitalize upon. In 2009-2010 Infantry battalion MTOEs gained the 29E EW Master Trainer position. Currently this MOS focuses on counter-IED Electronic Warfare Systems. In a decisive action environment, this position could be reorganized on the UMR to fall under the S2 shop, specifically tasked with integrating EM considerations into intelligence products. In this capacity, the battalion 29E would also better serve the S3, as the subject matter expertise gained from detailed analysis of the operating environment with the intel folks transfers directly into the employment of friendly EW resources with current and future friendly force operations (as discussed above). Another benefit of this task organization is that it would provide a direct, defined LOC with brigade EW resources, reducing information lead times.

Electronic Warfare has an operational impact across all warfighting functions. The time to incorporate EM considerations into IPB is now. In order to provide Commanders with the best information possible, intelligence professionals must be able to communicate electromagnetic operational considerations in an impactful manner. The MCOO presents an opportunity to do so, while also providing the potential to positively impact additional MDMP product development. Intelligence professionals don’t have to take on this endeavor alone. By reorganizing and utilizing EW capabilities that currently exist in a battalion, the staff can leverage existing technical skills and knowledge to better assess, exploit, and employ electronic warfare tools on the battlefield.

[i] EM emitters include Radars, Radios, Jammers, and GPS.

Second Lieutenant Oliver B. Gagne is currently the Assistant S2 for 1-169 Aviation GSAB. He has prior service as a forward observer and infantryman, and has deployed in support of Operation Enduring Freedom. 2LT Gagne holds a Master’s Degree in Public Administration from the University of Connecticut.