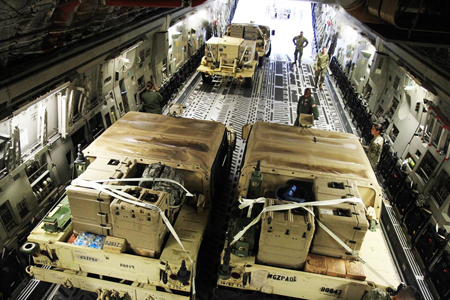 Having seen extreme weather events like Hurricane Harvey in the past, I can both sympathize and emphasize with the citizens of East Texas. In 1991, a storm very much like Harvey devastated eastern Bangladesh killing thousands and displacing millions; these storms are called Cyclones in South Asia and Typhoons in the Pacific. I was the Director of Plans and Operations (J-3) for Joint Task Force Sea Angel which was the American Humanitarian assistance/disaster Relief (HA/DR) response organization deployed to assist the Bangladesh government in responding to the disaster which actually exceeded Harvey is scope and fury. Used properly, military support can be critical to early success.

Bangladesh is much more populous than East Texas; consequently, the human death toll was infinitely greater, but the lessons that we learned there were applicable. One of the first lessons was that we initially thought our greatest American military contributions would be mobile hospitals and quick delivery of food supplies (the infamous Meals Ready to Eat). We quickly found that trauma injuries were not the largest source of casualties. Most immediate deaths were caused by drowning and the trauma capabilities of American Hospital ships and MASH-like surgery units were underused. The real American contribution was helicopters, landing craft, and communications.

Most of the true damage of such storms is done by flooding. The flooding knocks out the roads, rail lines, piers, and airports so necessary to both wholesale and retail distribution of relief supplies. A combination of wind and flood also devastates the communications network so necessary for coordination of HA/DR efforts.

The availability of relief supplies is generally not a problem. Most areas of the world prone to disaster have food, emergency water, and shelter. FEMA in the U.S. and the Office of Foreign Disaster Assistance (OFDA) overseas stockpile supplies as do state and local governments. The problem is getting relief supplies to where they are needed over devastated roads and into damaged coastal ports until things start to dry out. This is where military helicopters and landing craft become invaluable in the immediate aftermath of the disaster.

Military communications systems become key in augmenting damaged phone lines, cell towers, and radio/TV stations in identifying where aid is needed most immediately. In most domestic disasters, the 911 lines are quickly overwhelmed as was the case in the immediate aftermath of Harvey in Houston.

The immediate response of civilian volunteers with boats and large trucks capable of navigating flooded streets to rescue victims and their pets in Houston is gratifying, this frees up military helicopters to work the most inaccessible areas.

After emergency search and rescue is completed and victims are placed in temporary shelter, clean water becomes an immediate concern. Here, military engineering can provide an emergency temporary, but urgently needed fix. Military Reverse Osmosis Water Purification Units (ROWPUs for short) can provide wholesale production of emergency water supplies with helicopters and landing craft delivering them to areas where they are needed most.

Most people probably believe that the worst of the medical emergency is over when those injured in the initial disaster are treated and the dead properly interred. Actually, the majority of medical emergencies usually begin to occur ten days to two weeks after the initial disaster as waterborne diseases pop up. This is more of a problem in third world countries than in the United States, but in rural areas of Texas contaminated wells and ponds may become a real concern. Military engineers can help by constructing emergency tube wells in areas with relatively high-water tables to provide potable drinking water for humans and animals until normal water service is restored. Delivery of large quantities of water by military tanker trucks and bladders is something the National Guard, reserves, and active duty personnel can provide until normal water service is resumed. If necessary, military engineers can assist in restoring power until civilian utilities are capable of resuming operations.

One thing the military cannot help with is the influx of unwanted and unneeded supplies that can overload the few airport ramps and piers in seaports that have not been damaged by the storm. Tropical storms occur in warm months; thus, an influx of unneeded clothing, toys, and food can be counterproductive and block needed relief supplies. In Bangladesh, much of the limited airport ramp space was choked with snowsuits, mittens, and other clothing donations in an area where the average yearly temperature is eighty degrees. Cash donations to the Salvation Army, Red Cross, or other legitimate charities will have much greater impact. In the first couple of days after the storm hit, donations of food, food and clothing can help if provided by neighboring communities until FEMA, the Red Cross, and other relief agencies can get up and running.

The average military involvement in such disasters should be about thirty days, but this is where assessment comes in. The military needs to know when it is time to hand over specific functions to the proper civilian agencies. The military is a blunt, expensive instrument; and once conditions are right, it is time to let the pros take over. This may happen incrementally as some areas will recover more quickly than others but a smooth transition driven by competent assessment can make the military contribution to an HA/DR operation truly successful.

Gary Anderson is a retired Marine Corps Colonel with extensive HA/DR experience in Bangladesh, Somalia, and the Philippines. He has written several studies on the subject.