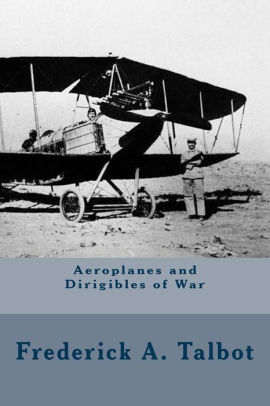 About five years ago, I stumbled upon the audiobook of Aeroplanes and Dirigibles of War by Frederick A. Talbot[i] while searching through the free audiobooks available on Librivox.org. While at the time this book was written it might have been more closely aligned to the popular mechanics genre, it is one of the most fascinating military history books I have encountered. This book was written early in World War I, being published in 1915, and captures the some of the major innovations occurring in the realm of aviation warfare as the various armies of the world struggled to find the best application of the rapidly evolving technology and tactics of air warfare.

The book begins with the now absurd assertion that aircraft is the height of human ingenuity but lacks any commercial purposes outside the transportation of mail. The author expresses remorse that this technology has been adapted so well to the worse aspects of humanity (war). If you can make it past the archaic perception of the future of aviation in the first chapter, the book opens into an interesting mixture of technical specifications, comparisons, history, and tactics. I believe the approach of the author in writing this work limits potential biases. For every major assertion of the superiority of one nation in comparison to another in some aspect of aviation warfare, corresponding technical data to prove the assertion was true was provided. Outside of asserting that the spirt of English pilots were greater than German pilots (a possible bias of the English author), I could find no other example outward bias from the author. This book also destroys the myth that pilots were the “knights of the air” interested in only disabling other aircraft but not killing other pilots by listing pilots one of the preferred target areas on enemy aircraft.

This book recorded the tremendous evolution that was required to weaponize aircraft. From comical realizations that in high winds an observation balloons could tip to a decree that observers could fall out of the basket to the difficulty in dealing with the momentum of aircraft in dropping bombs, this book presents a wide array of problems that the various nations were trying to solve. Anyone that has studied WWI aviation warfare understands some of the inventions that greatly shifted aviation warfare almost immediately the publishing of this book, like the interrupter gear that allowed machine guns to fire through the propeller of aircraft to only increase the lethality of aviation warfare. Scholar will also immediately recognize the rumor of non-exploding gas that this author dismissed as German propaganda was in fact real, being helium.

As a combat veteran, I realized that some of the information presented in this book was very similar to what was currently occurring on the modern battlefield. The use of crippled aircraft as what we would now refer to as a Vehicle Borne Improvised Explosive Device (VBIED) was fascinating. And the means of ranging and destroying observation balloons might be adaptable to deal with the modern battlefield threat of drones. In this way, I believe that this book would be a useful tool in providing examples of how to deal with a rapid evolution of technology on a battlefield. While it is obvious that new technologies will never duplicate the challenges faced during WWI, this book does provide some insights on who we might go about thinking of different ways to improve and implement new technologies on the battlefield.

In the end, this is a book that I would highly recommend to service members as a lesson in the evolution of military technology. It would also be a good book for anyone interested in the history of World War I or aviation warfare. With this work already being more than 100 years old, I hope that it can be introduced to a new generation that can find its valuable insights into WWI and possible utilize its ideas in the wars of the 21st century. For those of you that wish to watch a more detailed analysis of this book, you can do so at this link: https://www.youtube.com/watch?time_continue=3&v=cUb0g7_FnaU. This book is available in audiobook form from Librivox.org: https://librivox.org/aeroplanes-and-dirigibles-of-war-by-frederick-a-talbot/. It is also available at Amazon in multiple formats: https://www.amazon.com/Aeroplanes-Dirigibles-War-Frederick-Talbot/dp/140680763X

A scanned copy of this book can also be found here: https://archive.org/details/aroplanesdirig00talbrich/page/n7.