Despite complete territory loss in recent months, ISIS still has plenty of life left, and its predecessors have recovered from far more difficult situations in the past. ISIS has more manpower, money, and reliable networks than it ever had before it began controlling territory. Considering how successful the group became with less resources, its current status should still be very worrisome. Combine these factors with diminishing interest from policymakers, impending critical infrastructure shortages in Iraq, inadequate reconstruction funds to Sunni-dominated areas, and ISIS’s history of co-opting civil unrest, and suddenly an ISIS resurgence doesn’t seem so far-fetched.

The group originally emerged as al-Qaeda in Iraq (AQI) in 2003 after capitalizing on sectarian tensions and conflict brought on by the U.S invasion. However, a series of AQI bombings in 2005 targeting civilian Muslims alienated its key demographic, and the U.S.-funded Awakening Movement — an initiative which armed Sunni tribes frustrated with AQI’s brutal tactics and attempts to govern — nearly destroyed the group in the late 2000s. Despite near annihilation and a fraction of the support that the group has today, AQI reemerged as the Islamic State (IS) with shocking success in 2014.

Inside Syria and Iraq, ISIS has vastly more members than its predecessor in the late 2000s. As of March 2019, Syrian Democratic Forces (SDF) officials reported over 29,000 ISIS members surrendered from ISIS’s last pocket of territory, just four square kilometers in Syria’s Deir ez-Zor province. The total membership of ISIS's predecessor AQI during the group’s height before the Awakening Movement was estimated at just 15,000. Regardless of ISIS's reduced stature by this time, it had almost twice as many members in four square kilometers in Syria than it had in all of Iraq at its height in the mid-2000s. Although those four square kilometers were undoubtedly home to an above-average density of ISIS members compared to anywhere else in Iraq and Syria, the numbers are still staggering.

The group likely has far more money than it did prior to 2014. Coalition Forces have cut ISIS’s oil revenue by over 90% — which sounds very promising — but as of late 2017 that still left the group with a monthly income of approximately $4 million. While it’s true to say this is a dramatic drop in funding compared to the estimated $50 million of monthly oil revenue at its peak, it’s also true that ISIS‘s expenses have dropped exponentially. The funds from these oil fields enabled the group to govern its new territory, but was not instrumental in its initial capture. The Islamic State swept over huge swaths of territory in 2014 with the money it made from criminal activities — such as kidnapping for ransom, extortion, and illicit smuggling — reaping the benefits of the oil fields only after achieving military success. ISIS today will certainly continue making money through criminal means, but this time it’ll be able to combine that revenue with reserves it stored at its height, which some estimate at $500 million, giving it an extra leg-up compared to its previous resurgence efforts.

ISIS’s command and control (C2) within Syria and Iraq has always been an enabler for its success, and it's no different when it comes to ISIS’s growing network of affiliates around the world. The ability of current ISIS leaders to direct and coordinate its affiliate’s activities in pursuit of strategic goals is a huge advantage over its predecessors. Take for example ISIS's recent attack campaign, Revenge for the Blessed al-Sham. As depicted in the graphic below, not only did activity in Syria and Iraq increase in the week after April 8th, global affiliates also participated. 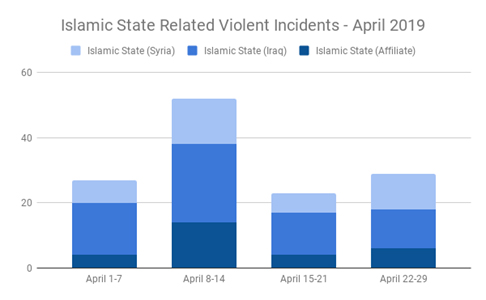 Because the announcement of the campaign came on April 9th after the first series of attacks, some reporting suggests that this campaign is an “opportunistic branding” of a particularly successful but uncoordinated string of attacks. However, the implications of ISIS's claims are too dangerous to ignore. If true, the C2 involved in carrying out a highly sophisticated, international attack campaign is staggering. The benefits of having affiliates that are well-organized, responsive, and willing to prioritize strategic goals over local initiatives are numerous, but include advantages such as providing alternative safe havens for leadership and redundant facilitation nodes, relieving pressure on the core group through diversion tactics, and even the opportunity to declare a caliphate elsewhere should conditions allow.

Given ISIS’s history of co-opting peaceful protests and morphing them into a catalyst for its insurgency, all the group needs to resurge is an event causing widespread instability. The recent unrest in Basra potentially foreshadows what may come in Sunni-dominated Northern and Western Iraq: the Iraqi government’s chronic struggle to provide basic services during the summer months will now be amplified by huge amounts of destruction brought on by previous counter-ISIS operations. In addition, ISIS media has recently released publications encouraging the burning of crops, possibly in an effort to undermine food security and further inflame the situation. As has happened previously, ISIS may be able to use this crisis to drum up legitimate local support through non-ideological means. Whether or not the civilian population is aligned with ISIS is moot if ISIS is the only institution that can be relied on for consistent, basic services.

Where Do We Go From Here?

While the U.S. can’t directly solve Iraq's critical infrastructure shortages and reconstruction fund allocation issues, frank discussion of this bleak situation may help reverse diminishing interest from U.S. policymakers and keep resources allocated to the counter-ISIS mission. Mainstream rhetoric around the group’s alleged defeat doesn’t acknowledge that ISIS is much better situated to resurge now than it was leading up to 2014, tempting policymakers to shift focus to more enticing inter-state tensions. Military action on the part of the U.S. will not lead to ISIS’s lasting defeat, but continued counter-ISIS efforts are critical to allowing the Iraqi Government the time and space necessary to address systemic issues that feed into ISIS’s resurgence efforts.

Megan O'Dwyer has spent the past three years as analyst covering counter-terrorism issues for both U.S. military and national defense agencies. Prior to transitioning to an analytic role, she served as a foreign liaison officer on behalf of the Department of Homeland Security.