Having deployed recently in support of exercise Shared Accord 19 in Rwanda, we argue that an answer to this question requires nuance that is often glossed over. While we will not judge the merit of our deployment from a geopolitical perspective, we can readily attest to its benefit from the perspective of a troop-contributing unit.

Almost all discussions prior, during, and after our deployment centered on its impact on our readiness level. While we progressed in our “mission essential tasks” (METs), we believe that such a narrow construct downplays the development our soldiers gleaned from the deployment. With the recent transition between U.S. Army Chiefs of Staff, the top priority has shifted from “readiness” to “people.” Subsequently, we should consider that such investments in our people are an antecedent condition to readiness.

Shared Accord included more than two dozen partners hosted by the Rwanda Defence Force (RDF) and was one of a series of military-to-military activities across Africa designed to build partner capacity and interoperability. The event had multiple components from a collaborative medical partnership in Kigali’s military hospital to the construction of a United Nations Base Camp in Gako. It also included a multinational Command Post Exercise (CPX) and a Field Training Exercise (FTX). The CPX focused on peacekeeping and countering violent extremist organizations from a senior staff-level, whereas the FTX (led by our task force) allowed partnered militaries to integrate at the tactical level. Indeed, the deployment realized several aims – from increasing our ability to work as part of a coalition to deploying to an expeditionary environment. It also provided a powerful experience for our soldiers and important context to our missions across Africa.

We have a saying in our Brigade Combat Team (2/101) – “A Strike Soldier Fights Where He is Told and Wins Where He Fights.” We suggest this phrase benefits from the caveat that our soldiers must always understand the context in which we are asked to deploy. For instance, one cannot disaggregate our deployment from the genocide that occurred 25-years ago. This violent past seems distant to a tourist in Kigali, though the trauma lingers over the nascent democracy as was openly shared by our partners during our tactical exercise.

The friendships fostered through several weeks of realistic training led to respectful and candid conversations about this history. Several of our counterparts participated in “the struggle” in 1994. One colleague, now 41, was 16 when he joined the liberating army. His service included four years fighting in the Congo. Another officer grew up in a Ugandan refugee camp. His first taste of combat was on the same land in which we were training, a battalion-level defensive position in the early 1990s. He frequently pointed out the former government’s quarters as we traversed the prominent terrain features. They reflected on their fight for freedom, which in some cases, required marching hundreds of miles on little-to-no resupply. The resourcefulness of the RDF is an admirable trait, one that stands in contrast to the self-imposed limits western armies can put on themselves. The RDF always find a way to accomplish the mission, oftentimes in unorthodox and creative ways. As one officer noted, they “ate small and fought strong.”

As today’s soldiers predictably sought opportunities for WiFi, it was hard not to be mindful of the juxtaposition. Moreover, it was hard not to be impressed by how far the country has come. Rwanda is now the second-largest United Nations troop contributing country in terms of peacekeeping operations in the world, which is remarkable given its comparative size. Its increasingly professionalized armed forces maintain a responsibility to protect civilians, a duty they take seriously given their past.

In preparation for the exercise, we made every effort to place the event in context. Given that many of our soldiers had never left the United States, we wanted them to experience the Rwandan culture and have an overseas experience outside of the training environment. This naturally involved visits to the Campaign Against Genocide Museum and Kigali Genocide Memorial to gain a further appreciation for its impact. We also designed a professional reading series for our leaders to provide the backdrop for our deployment.

Our two-week FTX seemed straight forward from a tactical perspective though it brought new challenges and experiences. We tested our ability to deploy to an expeditionary environment. We jointly conducted round-robin situational training exercise (STX) lanes in preparation for a five-day FTX in which our headquarters served as the higher command for a soon-to-be deployed Rwandan battalion. The exercise integrated elements of the Rwandan military, national police, and local police in a simulated peacekeeping operation. Due to the unique challenges of humanitarian missions the participation of local police units provided a critical perspective, one which ultimately led to a more realistic and valuable training exercise. Similarly, the U.S. contingent included elements from the “total force.” Reserve and National Guard units from Michigan, New York, and Iowa were able to train alongside the active component. Such opportunities are less frequent given the drawdowns in Iraq and Afghanistan, and allowed specialized units including engineers and military police to build partner capacity in conjunction with their own tailored training. 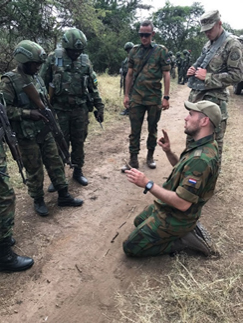 A Dutch Soldier conducts an after-action review following a convoy operation during Shared Accord 19.

Soldiers operated under austere conditions within a coalition, which also included a contingent from the Royal Netherlands Army. Some U.S. soldiers commented they never fired their weapon as much as they did as part of these joint exercises. Others noted they were able to both build and teach classes for the first time, which gave them the confidence to do so at home station. A junior soldier from the U.S. found himself briefing multiple foreign General Officers, and did so confidently and effortlessly as he worked through an interpreter and in the presence of media. Importantly, such instances demonstrated to our African partners the critical role of the non-commissioned officer corps and the outsized impact it has on an organization’s ability to effectively operate at every echelon.

The opportunity to operate alongside partner armies from Europe and Africa also allowed for an organic exchange of best practices. Young leaders teaching classes to Rwandan soldiers alongside Dutch infantrymen showcased a myriad of different tactics and techniques refined during generations of war. It was a unique opportunity to demonstrate to our soldiers that we do not have a monopoly on doctrine or best practices. It also sparked many good discussions during our after-action reviews.

Experiences like Shared Accord 19 further demonstrate that readiness is more complex than MET ratings. The knowledge gained when a unit deploys itself from home station to another continent, trains with multinational partners on foreign soil, and redeploys home is nearly impossible to replicate. Conducting expeditionary deployment operations at the small-unit level builds capacity and a sorely needed institutional knowledge in advance of contingency operations.

Deploying in support of Shared Accord was an excellent opportunity to build partner capacity while enhancing our unit’s readiness. Again, these opportunities are often presented as “readiness consuming” and viewed as a burden to the troop-contributing organization. But the choice between building readiness and supporting these missions presents a false dichotomy. Deploying soldiers to another continent and conducting multinational training is an experience that develops and prepares soldiers and leaders at all echelons for future operations. It exposes us to new ideas, viewpoints, and doctrine that we can internalize and build upon at home station. And, if contextualized properly, such experiences drives home an important “why” that is critical to building motivated and proud formations that understand where they fight, and the importance of their mission.

Jaron S. Wharton is a Lieutenant Colonel and infantry officer in the 101st Airborne Division. He presently commands 1st Squadron, 75th Cavalry Regiment and most recently served as the Chief of Staff to the Deputy National Security Advisor for Strategy on the National Security Council. He is a graduate of the United States Military Academy and holds advanced degrees from both Harvard and Duke, where he earned his Ph.D. in Public Policy.

Sean Parrott is a First Lieutenant and Armor Officer currently serving in the 101st Airborne Division. He is presently the Logistics Officer for 1st Squadron, 75th Cavalry Regiment and most recently served as a Platoon Leader. He is a graduate of Santa Clara University.