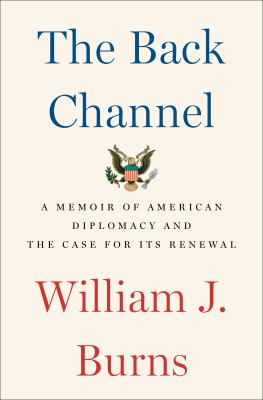 Secretary of State Mike Pompeo’s efforts to rebuild the “swagger” of the State Department suffered another blow in early March in the form of a 22% cut in the White House’s proposed 2020 budget. This $12.5 billion Dollar cut helped offset a proposed $33 Billion increase for the Department of Defense for the same year.

For all the publicity around these cuts, this trend is hardly unique to the current administration. Rather, the imbalance reflects a broader post-9/11 militarization of American foreign policy and a willing abandonment of diplomacy as the foreign policy tool of first resort. Bill Burns’ The Backchannel: A Memoir of American Diplomacy and a Case for its Renewal provides a skillful dissection of what he calls this “era of inversion” between force and diplomacy. Burns, who The Atlantic once described as “America’s secret diplomatic weapon,” is widely lauded by Presidents and Secretaries of State from both political parties. Reading The Backchannel, it is easy to see why.

In the autobiographic tradition of Ulysses S. Grant, Burns is reflective, critical, and self-aware, despite his rapid rise to the pinnacle of American diplomacy. Key mentors identified his talent early and accelerated an ascent that included service as the NSC regional director for the Middle East after a mere eight years and as Ambassador to Jordan in an unheard of 16 years. His career culminated as the second serving career diplomat in history to serve as the Deputy Secretary of State, the number two position in the Department, during the Obama administration. Nevertheless, Burns remained determined to speak truth to power during each of the five Presidential administrations in which he prominently served.

Over key issues of his era, Burns found himself on the right side of history - and the wrong side of the political moment. He opposed NATO enlargement to the Czech Republic, Poland, and Hungary under the Clinton administration and resisted the George W. Bush administration’s headlong rush to invade Iraq. Burns’ contemporary cables and emails on these topics (now declassified) are quoted extensively in the text, and reproduced in whole in the appendix. Not doing more to stop the march to war in Iraq – including resignation – represents Burns’ greatest regret, and the most compelling sector of the book.

Burns is no peacenik, however. The worldly realism of James Baker, Brent Scowcroft, and Colin Powell are lavishly praised throughout The Backchannel. Instead, he saves his sharpest critiques for ideologues who seek absolute victories, a luxury rarely available in the world of diplomacy.

Burns is at his best as he describes the “short game” of diplomacy: the countless meetings, cables, and compromises that enable the “imperfect triumphs” of diplomacy, such as the Iran deal, the genesis of the work’s title.  Burns’ memoir advocates for what he calls “quiet power.” Under this model, the “tool of first resort” is an empowered interagency Embassy Country Team that serves as strategic scouts, policy recommenders, and executioners of comprehensive policy responses. This model, Burns notes, often contrasts with the more commonly employed Washington-centric, ideological, and militarized decision making process. The reader is left with a rueful sense that perhaps the American unipolar moment following the end of the Cold War could have been extended had diplomatic caution not been shelved at decisive moments, such as the 1999 NATO expansion or the 2003 invasion of Iraq.

Despite Burns’ clear affection for his former employer, the State Department’s bureaucratic and cultural idiosyncrasies are not immune from his analysis. Burns delivers effective criticisms of State’s antiquated personnel policies, lack of professional development systems, and burdensome consensus-building process of clearing paperwork. While similar recommendations are laid out effectively in other works, such as Kori Shake’s State of Disrepair, Rosa Brooks’ How Everything Became War and War Became Everything, and Ronan Farrow’s War on Peace, they carry extra weight from an insider like Burns.

Perhaps Burns’ most effective and original critique is of the State Department’s effort to assist the military’s seemingly endless counterinsurgency campaigns after 9/11. He blasts these “local social engineering” efforts and notes that “it seemed as if we were trying to replicate the role of the nineteenth-century British Colonial Service, not play the distinctive role of the American Foreign Service.” Demilitarizing foreign policy, Burns believes, must start with getting America’s under-manned and under-funded diplomatic corps out of long-term “nation building activities that were beyond the capability of Americans to accomplish.”

Burns is an astute observer of the great events and people of his era. While Burns carefully avoids many of the empty truisms that characterize many works of this genre,  The Back Channel does not offer a comprehensive structure for the future of American foreign policy.  Instead, he attempts to make a case for why ordinary Americans should care, and pay, for America’s engagement in the world. However, his calls for a nuanced and case-by-case approach to crises conceals the unavoidable tensions within an idealistic, liberal America trying to execute a realism-based foreign policy. Nowhere in The Back Channel are the limitations of this case-by-case approach more evident than in Burns’ advocacy for American military interventions during the Arab Spring.

Burns supported the use of force out of a “Responsibility to Protect” (R2P) the Libyan population in Benghazi, and later advocated lethal enforcement of international norms against the use of chemical weapons by the Assad regime in Syria. The reader can be confused by the situational rationales Burns offers, and may leave the book wanting Burns to suggest a more comprehensive theoretical framework. Other recent critiques of American foreign policy in the post-Cold War era from the realist school, such as Stephen Walt’s The Hell of Good Intentions, provide a more consistent critique of American missteps and broader prescription to prevent future errors.

Nevertheless, The Back Channel should be required reading for military leaders who came of age in the DoD-dominated counterinsurgency era. Burns’ memoir provides fascinating and valuable insights into today’s multi-polar era and America’s likely great power rivals - particularly Vladimir Putin’s Russia, where Burns served as Ambassador. Military power will play an important role in these relationships. However, Burns is correct in noting that engaged diplomacy must become the main effort.

“Neither unthinking retrenchment” nor “the big stick alone,” Burns writes, will “be able to safeguard our values and interests.” Militancy and hubris are unlikely to persuade our allies, or enemies, of the value of their stake in an American-managed international order. As Burns notes, “only diplomacy can do that.”

The Backchannel: A Memoir of American Diplomacy and a Case for its Renewal- At Amazon.com