On the 17th of May 2017 over 4.000 inmates broke out of Makala prison in Kinshasa, the capital of the Democratic Republic of Congo (DRC), while 70 convicts fled from another prison in south-western DRC a few days later. In the preceding months, the European Union and the United States imposed targeted sanctions, both asset freezes and travel restrictions, on senior Congolese security and intelligence officials after government violence against civilian protests. An additional nine Congolese officials were then sanctioned on the 29th May 2017 for obstructing the elections and for human rights violations.

With prison breaks, government violence, kidnappings, mass atrocities, human rights violations, a powder keg of disgruntled citizens and suspicions that the Congolese Armed Forces (FARDC) may have been involved in the killing of two United Nations (UN) investigators just a month ago, it is not surprising that current and prospective investors are fearful of how the situation in the country could develop. Instability in the Democratic Republic of Congo has become the norm rather than the exception. Recent insecurity has centred on delayed elections – which were due to take place in November 2016 – following President Joseph Kabila’s unwillingness to step down after reaching the constitutional limit.

The current episodes of political unrest are the latest in a country which has been plagued by instability since achieving independence in 1960. The outbreak of the First (1996-1997) and Second (1998-2003) Congo wars led to the establishment of a permanent UN presence. Despite the transformation and expansion of these missions - political, economic, and social volatility constitutes a prominent risk. GlobalEDGE places the country in the lowest quartile of their country risk rating, with an even lower ranking for business climate. Social unrest and rising political tensions threaten the already weak state institutions. This report aims to illustrate how the latest political impasse is directly affecting the business climate in the DRC which is of primary interest to current and future investors but also for observers wishing to gain an understanding of how the political economy is evolving.

President Kabila’s unwillingness to step down has laid the foundations for protests, political manipulation and massive social unrest while continued outbursts of violence in the East threaten to spill over into Kinshasa. These concerns play a significant role for the country’s political landscape as “Anti-Kabila sentiment in the eastern Kivu provinces will be exacerbated by the president’s attempts to remain in power, escalating the risk of small-arms attacks by militant groups on mining and cargo assets”. Furthermore, there have been over 500 reported casualties in central Kasai (390 rebels and 120 security forces) in the past five months with a high risk of further atrocities. The relative weakness of the central government and its inability to assert control over cities in the East, such as Masisi, has resulted in continued instability. Such developments are not new however, as the DRC has experienced similar tensions time and time again. 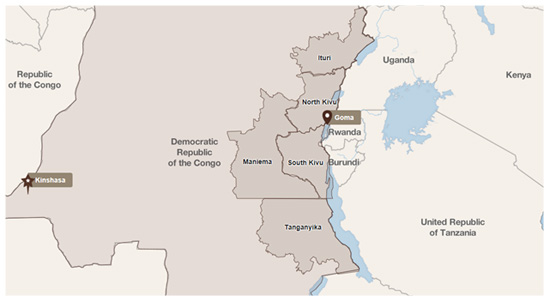 In fact, the country has seen more coups and assassinations than elections. In 1961, Patrice Lumumba, the first democratically elected Prime Minister was assassinated. In 1965, Joseph Mobutu, the infamous dictator deposed President Joseph Kasavubu. In 1997 it was Mobutu’s turn to be overthrown, this time by Laurent Désiré Kabila, who in 2001 was assassinated and then replaced by his son Joseph Kabila. Although the 2006 elections were considered to be a turning point towards a new democratic path, five years later Kabila was re-elected in suspicious fashion. Social unrest soon followed with citizens rejecting the results and legitimacy of the proceedings. The situation that developed after 2011 is similar to the one currently taking place, the only difference being that Kabila cannot stand for a third term. While the African Union, European Union, United Nations and the Organisation of La Francophonie have all put pressure on Kabila to abide by the constitution, yet another political impasse has developed.

With the ongoing deadlock, the situation in the DRC could develop in a number of different ways. Some directions are more likely to lead to a peaceful transition, while other scenarios will most certainly pave the way for heightened instability. As things stand, an escalation of violence and a drop in UN and foreign donor support are likely. The impact of donor support is not to be underestimated and there is a direct link between foreign assistance and Kabila staying in power. In this scenario Kabila is expected to step down and elections will eventually take place, once logistical obstacles are circumvented. It is not possible to assess how quickly the escalation of violence will force Kabila to cede power as he may continue to fight back. Hence, a series of protests could lead to widespread fighting and then ultimately to a civil war. Business Monitor International (BMI) argues that despite the escalation of violence this outcome would provide a better macroeconomic future as donors will continue their support once a new government is elected. Furthermore, a more ‘business-friendly’ leader will increase the likelihood of investment in the country. If a peaceful transition is to occur like the one in 2006, political consensus needs to be reached and Kabila must not make any further attempts to alter the constitution.

A military coup, followed by an election is possible, although there are complexities associated with any power-sharing agreements as the military would attempt to consolidate its control over the country. Despite the appeared fragility of the Kabila regime, government forces have thus far been able to suppress protests. As things stand, a coup is unlikely to take place because of how strong Kabila’s Republican Guard is, and because of its loyalty and allegiance to the President. Furthermore, the DRC’s violent past indicates that a coup would bring about even greater instability, as was the case when Mobutu Sese Seko came to power through a coup d’état in 1965 which led to widespread atrocities and very poor standards of living for 30 years.

The third scenario sees Kabila staying in power, but that would be contingent on whether he manages to maintain his networks; primarily those influencing the mining regions,

“…the Kabila family has profited enormously by offering concessions to various mining companies, and if true, we cannot rule out that this network will continue to support his government should the December 31 agreement fall apart. The same could be said of a foreign government, most likely the Chinese, whose substantial mining and financial interests in the DRC could see support for the government continue…”

Kabila’s ability to stay in power since 2001 shows his capacity to manipulate the political arena. Even with reduced donor support, countries like China will become more involved in exchange for greater access to resource-rich areas. Berwouts argues that the third scenario would look very similar to the end of the Mobutu regime, in that Kabila will need to militarise his administration in order to stay in power and will block any decentralisation processes so as to put an end to the political dialogue. With conflicts in North and South Kivu and recent instability in Burundi, a reaction by a notorious neighbour such as Rwanda could develop into outright fighting as in the Second Congo War, “Western and African powers fear the current impasse could lead to a repeat of the conflicts seen between 1996 and 2003 in which as many as 5 million people may have died”. Although any one of these scenarios could occur, the only certain development is that the economy has been negatively affected by the impasse.

Between 2010 and 2015 the DRC’s economy saw an annual growth of 7.7% thanks to high commodity prices and private consumption which paved the way for macroeconomic stability. As commodity prices fell in 2014 however, tax revenue and public spending went down which led to weak growth in 2016 at 2.8%. The country’s currency, the Congolese franc,  has depreciated immensely to reach a loss of up to 50% (an additional 30% from the start of this year)  while inflation has gone up by 30%. This depreciation is testament to the effects that the political deadlock is having on the economy. Consumer prices have increased by 15%, while foreign currency reserves are low. Furthermore, the DRC government announced in May that its GDP estimate for 2017 had fallen from an initial 4.9% to 3.5%. Despite a weak currency and several warnings from economists, the government is aiming to spend 10.6% more than last year. On a positive note, the budget balance was scheduled to reach surplus levels, especially since the mining output prices had increased and the economy is expected to grow by 4% due to rising commodity prices and low fuel import costs. Additionally, donor aid supplied in 2010 has significantly contributed to managing the country’s public debt which had enabled the country to become slightly more ‘business friendly’ in relation to previous years.

The DRC has always been characterised by weak infrastructure but today the government has to overcome greater challenges to improve the poor transport, energy and telecommunications networks, as it struggles to quell social unrest which is likely to scare off potential investors. Coupled with recurring corruption and high poverty levels there is concern that the political crisis caused by the postponement of the election will weaken economic progress. Global Risk Insights points to a direct link between political malaise and economic decline which would exacerbate an already poor business climate,

“A resurgence in violence and unrest would make doing business in the DRC – one of the worst places in the world in which to do business – even more difficult.”

Already ranked 184 out 190 on its ‘ease of doing business’ by the World Bank, primarily due to poor access to electricity, difficulty in registering property and paying taxes, weak trading structures, especially across borders and a non-existent insolvency framework, the next few months will be particularly important. Large companies based in the DRC, which have survived the instability over the years, are now assessing the prospect of leaving the country. A case in point is Freeport McMoRan, a US based mining company that sold its part of the Tenke copper mine. Although the company claims that the move was made to reduce the company’s debt, analysts say that the business environment heavily influenced the decision. Another example which illustrates the poor business climate is harassment by tax authorities with a recent report suggesting bogus custom duties amounting to $300 million dollars.

While Kabila focuses on delaying the election, the people of the DRC face low salaries, high taxes, rampant corruption and predatory institutions. In fact, it is estimated that there have been more refugees leaving the DRC than any other country, including Iraq or Syria. Making a living has become increasingly difficult and providing for one’s family continues to be a daily struggle for the majority of the population which will eventually spell trouble. Every move Kabila makes is being heavily scrutinised both internally and externally, and while the international community watches, the next few months will either help make, or completely break the Democratic Republic of Congo.

Dimitrios Perdikoulis grew up in the Democratic Republic of Congo and in Mozambique, spending a total of 15 years in Africa between 1992 and 2008. He then completed his Bachelor of Arts in Amsterdam in 2015, with a focus on International Relations, and then his Master of Arts in International Conflict Studies at King’s College London in 2016.