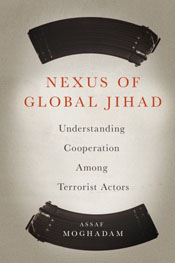 16 years after 9/11 and 14 years after “Mission Accomplished” is there anything left to learn about jihad? In Nexus of Global Jihad, Assaf Moghadam of the Interdisciplinary Center Herzliya, International Institute for Counter-Terrorism and Combating Terrorism Center at West Point says,“Yes.” Moghadam contributes by presenting a flexible framework for understanding how, not why, terrorist organizations cooperate (40).

Mirroring the structure of the book, this review highlights some oddities in acknowledgements and abbreviations before discussing Moghadam’s model of terrorist cooperation.

In his acknowledgements, Moghadam gives “special thanks” to “Lorenzo Vidino, who generously provided me with the English-language version of his edited volume on the Sharia4 movement, currently available only in Arabic” (xi). Given that Moghadam lists Arabic as one of his languages, this seems odd.

The next preliminary section, abbreviations, contains a more significant surprise. This section a standard list of terrorism-related abbreviations, from AQAP (Al Qaeda in the Arabian Peninsula) to UVF (Ulster Volunteer Force). However, between IS (Islamic State) and ISIS (Islamic State in Iraq and Greater Syria), lies ISI (Islamic State in Iraq) (xiv). This is odd because, per Moghadam’s own retelling, this “ISI” existed for less than two years (164). More importantly, “ISI” is not used to abbreviate “Inter-Services Intelligence,” which is Pakistan’s intelligence agency. This atypical choice of meaning for “ISI” is telling.

Almost immediately in the main text, Moghadam presents “a holistic typology of terrorist cooperation” (6), which captures who cooperates with whom, and to what level. For his model, he describes four classes of actors: terrorist entrepreneurs, informal networks, terrorist/insurgent networks, and states. These actors can cooperate in four ways: mergers, strategic alliances, tactical cooperation, and transactional cooperation. In his model, Moghadam emphasizes that these are fluid categories, especially regarding the levels of cooperation (118).

Moghadam grounds this typology in an “agent-structure framework” (7). The types of agents are listed in the preceding paragraph, and by structure he means the “enabling environment” for terrorist actors. In describing this environment he points to three key factors: the persistent appeal of jihadist ideology, the ability of actors to communicate using the internet, and ongoing armed conflict (271).

By combining agents, how they cooperate, and the environment in which they cooperate, Moghadam creates a lucid and adaptable model. He grounds this model by using a body of research from multiple disciplines and commendably states “the problem of terrorist cooperation, and terrorism in general, is best examined from an interdisciplinary perspective” (268). Moghadam is correct is describing that his dynamic typology “is well suited to grasping intellectually the constantly evolving threat of terrorism” (264).

In Part II of the book, Moghadam applies this model to several infamous as well as less well-known terrorist acts. His description of Osama bin Laden as a “venture capitalist” (142, quoting several sources), who funded “terrorist entrepreneur” Khalid Sheikh Muhammed (223) shows the explanatory power of Moghadam’s model. In Chapter 8, Moghadam skillfully uses publicly available evidence to provide a nuanced history of the complex relationship between Iran and Al Qaeda. In describing Al Qaeda and Iran’s varying levels of cooperation, including occasional declines into coercion, Moghadam’s model effectively captures the changes in this relationship.

Moghadam’s model works to describe the less well-known—at least from the experience of this American reviewer—jihadist Anjem Choudary. In the latter half of Chapter 9, the final substantive chapter, Moghadam explains that Choudary is a “London-born Salafist preacher of Pakistani origin…who was found in violation of Section 12 of the UK’s Terrorism Act 2000 by inviting support for a proscribed organization, the so-called Islamic State” (235). Choudary is a serial terrorist entrepreneur, who founded and inspired several similarly-named pro-Salafist movements in Western countries with names like “Islam4UK, Need4Khalifah, and Sharia4Belgium” (240-41). Choudary, proposed self-described “publicity stunts” (240), such as carrying black coffins to represent dead Muslims at a public mourning for UK soldiers.

Additionally, Choudary worked with similarly-minded individuals such as Belgian jihadist Fouad Belkacem, to build communities of disaffected European Muslim young men. Choudary and Belkacem were able to draw the young men of these communities off the internet and onto the ground in Syria (243-45). Moghadam’s model helps explain how someone can be persuaded to go from a message board to an active warzone in Mali (246). This explanation is a significant contribution to understanding the complexity of how terrorists operate.

Moghadam’s subtle analysis of nuanced topics such as European jihadist communities and especially the relationship between Al Qaeda and Iran, including the Iranian Revolutionary Guards Corps, is noticeably absent regarding the Pakistani Inter-Services Intelligence (ISI). The index (375) references Pakistan twice, once regarding its support of Kashmiri militants (30), and once in a discussion of Al Qaeda as it fled Afghanistan in late-2001. To wit, “While most senior leadership moved to Pakistan, Iran provided ‘safe passage’ to many jihadists” (202). Pakistan is mentioned, but not indexed in several more places (at least 127, 144-45, 148-49, 161, 208, 232), but the ISI is never mentioned by name. Abbottabad, where a US special operations team killed Osama bin Laden in his safe house, is mentioned once. However, Moghadam is silent about Abbottabad’s primary role as the home of the Pakistani military academy.

This oversight regarding the ISI would be annoying if it came from a less capable scholar. Moghadam’s contortions to avoid the mentioning ISI, especially when otherwise accurately describing Osama bin Laden’s first international project, are bothersome. In 1984, the Maktab al-Khidamat or Services Bureau, was established in Peshawar. Osama bin Laden was less than 30 years old when he co-founded the Services Bureau, and this young Saudi man clearly received local assistance. Moghadam’s choice to not discuss the nearly three-decade relationship between bin Laden and the ISI is problematic.

This weakness of linguistic analysis comes into play in Moghadam’s explanation of the appeal of the Islamic State. From Arabic, the Islamic state is best transliterated as Al-Dawlah al-Islamiya. Dawla is one of at least two possible words for “State” in Arabic; another common word is Watan. The choice of Dawla, as opposed to Watan matters because Watan means “State” in the modern, nation-state sense. For example, Jordan’s national motto is Allah, Al-Waṭan, Al-Malik (God, Country, King). Because the Islamic State presents itself as a Dawlah as opposed to a Watan, the Islamic State fundamentally transcends borders, which is part of why it appeals to people continents away from the fighting.

Moghadam’s retelling of history has the above glaring weakness, and his solutions are also imperfect. In explaining the “enabling environment” for terrorist actors, Moghadam discusses the importance of the internet and ongoing armed conflict. For the internet, Moghadam proposes “counterterrorism practitioners could benefit from outsourcing at least part of their data-gathering efforts to reliable commercial partners…even though such a step would raise other problems related to privacy” (270). Moghadam also recommends that “governments especially in the West should establish relationships of trust with local Muslim communities” (271). Third-party surveillance that explicitly raises privacy concerns seems counterproductive if the end goal is building trust.

Moghadam emphasizes the importance of ongoing armed conflict to terrorists. In explaining why ongoing armed conflict matters, he writes, “the post-Arab Spring period in particular has made it painfully evident that ignoring civil wars and insurgencies can incur significant humanitarian, political, financial, and other security costs” (273). This view of armed conflict as a given is an irresponsible retelling of recent history. The US has occupied Afghanistan for over 15 years and Iraq for over 10 years. Particularly in Afghanistan, the insurgency has historically drawn support because of the unpopularity of the inner circle of the US-backed leadership of Hamid Karzai and his notoriously corrupt brother Ahmed Wali Karzai. The US has used drone strikes in at least seven other regional countries, which fuels anti-Americanism among Muslim populations. Additionally, the US role in removing Gaddafi in Libya without a plan for the aftermath should not be forgotten. The US needs to be aware of its contributions to conflicts in Muslim-majority countries when seeking to reduce ongoing armed conflict.

Moghadam proposes an adaptable model for examining the nuanced and shifting links between terrorist actors. He delivers his model in an imperfect book.

The views expressed in this review are those of the reviewer and do not reflect the view of the World Bank Group, its Board of Directors, or the governments they represent.

Philip Zager is an attorney and policy analyst based in Washington, DC. He currently is a Consultant at the World Bank. Previously, he was an associate at an international law firm in its offices in Cairo and Riyadh. His practice specialized in international investment law, cross-border contracts, and Islamic Finance. Before that, he worked for the International Foundation for Electoral Systems in Amman, Jordan, where he supported the establishment of an Independent Electoral Commission. He received his JD from the Georgetown University Law Center, where he was a Senior Editor at the Georgetown Journal of International Law. He received his MA from Johns Hopkins SAIS, where his thesis focused on the development of Islamic Finance. He received his BA magna cum laude from the University of Southern California.