Book Review: Galula: The Life and Writings of the French Officer who Defined the Art of Counter-Insurgency 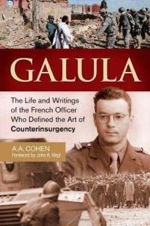 Galula: The Life and Writings of the French Officer who Defined the Art of Counter-Insurgency by A. A. Cohen and a foreword by John A. Nagl.  Published by Praeger, Boulder, Colorado, 2012.

Canadian Army Officer A. A. Cohen has written a new and refreshing book on the life, ideas, and intellectual struggles of the French officer David Galula.  It is a book that I have re-read simply because it has led me to disagree with Cohen about Galula’s place in the pantheon of counter-insurgency theorists.  Typically, the best books are ones in which you find yourself intellectually stimulated to argue with the author.  While Galula was featured prominently in debates during Operation Enduring Freedom and Operation Iraqi Freedom, I for one questioned whether all his advice was applicable to American combat forces, specifically due to the values we represent.  For one, Galula was not constrained with maintaining American values. For instance, Cohen explains how he saw French dominion over Algeria as natural, since the pied-noir minority (European French Settlers) paid the majority of the taxes. Yet he recognizes the second class citizenship status of Algerian Arabs as sustaining the insurgent narrative.  I enjoyed Cohen’s emphasis that Galula was originally from a family of North African Jews that had settled in Tunisia and Algeria.  He describes how his ancestors earned French citizenship before World War I and how the French Vichy of World War II stripped him of his citizenship and commission because of his religion, leading him to fight for De Gaulle and the Free French in 1944.  It was after World War II and his several years in China that caused Galula to truly reflect upon and appreciate the writings of Mao, Galula later became an eyewitness to China’s Communist Revolution, and his career as a colonial infantry officer made him ponder communist insurgencies and the intertwining of the military and political even more closely in unconventional versus conventional warfare.  Readers will learn about an officer who attempts to understand the complex elements of insurgencies in French Indochina and Algeria.  In Algeria he served in the field and put into practice his ideas of making the population part of the solution and not part of the problem.

One chapter covers Galula’s intellectual debates that blossomed in the United States with the RAND Corporation and at Harvard University.  Cohen does not lose sight that Galula published his important book, Counterinsurgency Warfare: Theory and Practice (Praeger, 1964),  in English and in the United States before it was rediscovered by the French decades later and translated from English into Galula’s native language.  Galula advocates building a government from the people upwards, as this begins the gradual empowerment of the local population to the detriment of the insurgent.  He argues that the support of the people is vital for the insurgent as well as the counter-insurgent.

The final chapters discuss his influence on General David Petraeus, Donald Rumsfeld, and many of our senior leaders as well as shaping the U.S. Army’s Counterinsurgency Manual FM 3-24.  Now as to the subtitle of the book, The French Officer who Defined the Art of Counterinsurgency, among the French there is Roger Trinquier (d. 1986) who wrote several books on the subject, the British military theorist B. H. Hart (d. 1970) wrote, Strategy: The Indirect Approach (Praeger, 1954), and of course there is Galula’s own inspiration Mao.  Personally, I am not convinced that Galula deserves the title of “Officer who Defined the Art of Counter-Insurgency.”  Another point of argument, that is lightly touched on in Cohen’s volume, is Galula’s views on torture, which, to be fair, is not as extreme as his French counterpart Trinquier, who inspired part of the character of Colonel Mathieu in the 1966 Gilo Porticovo film, “The Battle for Algiers.” Nevertheless, Cohen has done a great service by providing serious students a primer to read about Galula, before tackling his book and his RAND study, the operational biography, “Pacification in Algeria, 1956-1958.”

Indeed Ned, indeed. Which makes us more and more selective on readings: quality not quantity (as Ezra Pound would put it).
Yours
Nuno

Well that experience is likely to be critical and I am -- alas and unfortunately -- likely to be too old to get it; I am trying. In addition to this article inspiring me to add the book reviewed to my reading list, the good CDR's book on the rising threat of militant Islamism is a must-read because the people feeling most isolated these days may well be modern, moderate Muslims. Argggh! So many books, so little time.

One point also worth exploring in future biographies - only slightly touched by Cohen/Nagel - is the military intelligence dimension and experience of Galula, who fulfilled this duty in some diplomatic posting abroad, including China. The link MI-COIN doctrine/practice is crucial, as we all know.
And building on one your remarks: as we have our own commented versions of Mao, Giap, Che, next generation Salafis, etc., the other "side" also has commented versions of Galula. but again this is another story, worth researching, from Moscow to Beijing, from Algiers to Ho Chi Minh City(time to open some archives, folks!).
Cheers
NR

P.S. I also wonder if COIN thinking takes into account the response of insurgents when these bottom-up efforts begin to bear fruit. Insurgents often appear to turn violent and coercive against the very people they are 'liberating'. Might that occur because these COIN efforts (perhaps responding to the insurgency after some time) threaten the position of power and privilege the insurgents hold over their 'beneficiaries' (i.e., their constituents)?

Additionally, I wonder if a protracted stalemate does not actually work to the advantage of these insurgents because it allows them to apply coercion against their constituents to remain in power; such coercion may not appear to be so harsh as opinions between the competing sovereignties polarize the population as that stalemate continues. Thus some insurgent movements really do become gangster regimes over time, aided unwittingly by a failing counter-insurgency that refuses to quit or, more likely, is conferring compelling, if indirect, benefits on other key stake-holders.

Thus, some of the gutsier proposals aired in this forum for economic development -- not necessarily expensive -- begin to empower people to develop their own stakes in their own futures. That collective future may diverge from both alternatives, though at least a virulent insurgency does not win. If true, picking and choosing when to wage a counter-insurgency also relies upon trying to anticipate what a 'third way' may look like (or trying to assess the likelihood of an intervention making a bad situation worse).

Senhor Rogeiro (obrigado, Google translate),
As always, I enjoy your providing a reflective, dirt-under-the-fingernails perspective from a different national experience. While I was reading this review, I wondered whether economic empowerment may now be as important as political, from the bottom up. I have other thoughts following my signature not directly related to the subject but building on your idea that formulaic applications do not fare well. Like the refreshing article about learning all one needs to know in Afghanistan, your comments suggest to me that success in applying this doctrine may depend upon an unusual blend of foresight, problem-solving, risk-taking and humility.
Thank you for thoughtful views,
Ned McDonnell.

I agree on the challenging aspects of this book, at least as challenging and paradoxically as Capt. Galula's (aka Jean Caran, among other aliases, but that's another story)life and work were.
Galula was one of the major influences of the Portuguese COIN tactical and battlefield thought, when the African wars started,in 1961, although he was not so well known when Lisbon had the problem of the Satyagraha insurgency in Goa, Damão, Diu, Dadrá and Nagar Aveli, in the fifties,leading to the conventional forces invasion of Portuguese speaking India territories by the Indian Union, 1961.
Galula was one of the influences when then majors Santos e Castro, Soares Carneiro and others formed the Portuguese Commando forces, in the early sixties, and the irregular and subversive warfare Portuguese AF manuals. But Galula himself was also influenced by lessons learned from the Portuguese experience, although he died prematurely in a period where Portuguese COIN methods still hadn't produce full results, in places like Angola, where the military side of the war was practically over, by April 1974.
But as Galula and others taught, irregular and subvesive warfare - from Kabylie to Indochina - was essentially a political-military-police-ideological 'manoeuvre', that could not be won or lost exclusively in the traditional military chessboard.
Thus the elusive nature of many COIN operations, or many apparent "defeats" and many proclaimed" victories". Of course Galula was "ideological" in his Gaullist worldview, but in applying lessons from reality he arrived quickly to the conclusion that this kind of "next type of war", in a media technological and savvy society (still nascent during his time), would center around combats for the soul, for the hearts, minds, feelings and political instincts of real women and men, real people.
Can his body of thought be applied to future confrontrations? Hardly as a ready to use recipe. Galula himself was sophisticated enough - before and after his RAND experience - to be modest about the possibility to use aautomatic uniform solutions for vastly different problems. But he gave keys to the decision-maker, to the combatant (guerrilha or state, or third party), to the general public, even to the critics and analysts.
In that sense his greatest task - to challenge established "truths" - was achieved with success. But we have to read him "avec un grain de sel".