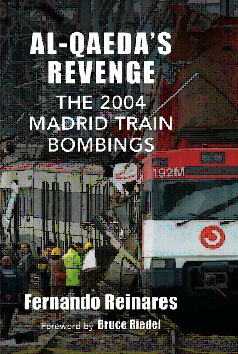 On the morning of 11 March 2004, day now known as 3/11 or 11-M, a series of bombings shattered the morning rush hour on Madrid’s commuter rail system.  Just three days prior to Spain’s general elections initial reactions were to blame ETA (Euskadi Ta Askatasuna) the Basque separatist movement.  The attack unfolded when ten bombs secreted on four separate commuter trains exploded near-simultaneously during the morning rush, between 0737 and 0741 hours.

Tactically we see that four separate trains (with six-car consists/convoys) were targeted. The first detonated at Atocha Station with three successful detonations (one failed to detonate); all four bombs on the second train detonated at Calle Téllez; two of three devices exploded on a third train at El Pozo Station; and a single device exploded onboard a fourth train at Santa Eugenia Station, where a third bomb which failed to detonate was forensically examined by police providing crucial insight into the nature of the improvised explosive devices used (see diagram at p. xxiii).  These timed explosives were loaded on the train at the beginning of their route at Alcala de Henares in the suburbs north east of Madrid.

The attack immediately left 191 people dead and over 1,800 wounded.  In the aftermath the attack police surrounded the attackers in a rented apartment in the early afternoon of 03 April in Leganés.  Seven of the attackers then detonated an explosive leading to their death.  In their suicide escape a “police officer, a member of the Special Operations Group (Grupo Especial de Operaciones; GEO) was also killed in the explosion,” becoming fatal victim number 192 of the 3/11 network (at p.29). [1]

The tactics employed involved multiple near-simultaneous attacks against densely populated targets; in this case a transit target.  The Madrid network followed the template advocated by Abu Musab al-Suri in the GIA (Groupe Islamique Armé) attacks against RER commuter trains in at Saint-Michel Station in Paris on 25 July 1995.  The Saint-Michel attack was the first jihadist attack against transit targets in Europe. [2]  The devices differed from typical al-Qaeda construction using TATP instead using locally available dynamite (p. 146). [3]

The 3/11attack was followed by an attempt to attack the high-speed AVE train between Madrid and Seville but the device failed to detonate and was discovered by a rail right-of-way maintenance crew (p. 139) demonstrating further intent of attacking transit targets.   But the story isn’t about the tactics, techniques and procedures used to target transit systems, rather this book is the story of al-Qaeda’s revenge.

For Reinares, director of the global terrorism at Madrid’s Elcano Royal Institute (Real Instituto Elcano) and professor of security studies at Universidad Rey Juan Carlos, Global Fellow at the Wilson Center, and adjunct at Georgetown University, al-Qaeda’s revenge as a motive for the Madrid attack is twofold.  First it entails retribution for a broad, historical affront—the Reconquista and occupation of Muslim Spain, al-Andalus.  Second and more immediately it refers to retaliation for law enforcement interference with al-Qaeda’s jihadist intentions in Spain as seen in counterterrorist activities directed against al-Qaeda’s Spanish cell in 2001 and other related activities dating back to 1995 (p.127).

Reinares provides a detailed case study of the Madrid cell’s motivations and social network connections.  In contrast to the popular view that 3/11 was the work of self-radicalized petty criminals this was a sophisticated globally-linked operation.  As Bruce Riedel of the Brookings Institution observes in his Foreword:

Contrary to the accounts circulating at the time, which emphasized that the plot was the work of a loosely organized, self-recruited group of local jihadists without any real organizational connection to al-Qaeda, this definitive account shows that the plotters were from a long-established al-Qaeda cell with strong connections to the senior al-Qaeda leadership then hiding in Pakistan, including Osama bin Laden (p. xiii-xiv).

That is not to say that criminal-terrorist connections weren’t important; they were and remain so. [4]  Rather, a hybrid network emerged from differing cells to culminate in the 3/11 network that carried out this strategic al-Qaeda attack.  Reinares describes the evolution of this network in exquisite detail.  To do so, he divides his case study into two major sections, each comprised of seven chapters.  After a brief prologue, he starts building his case in “Part I. The 3/11 Terrorist Network: Origins, Components, and Formation.”

The first two chapters detail the pre-history and formation of the historical al-Qaeda cell in Spain (Abu Dahdah’s cell), the third details the source of the desire for retribution to redress interference from Spain’s security services and police (including the Guardia Civil and Cuerpo Nacional de Policía) and links to Algerian jihadists. The next three chapters detail the involvement of the Moroccan Islamist Combat Group (MICG) in the 3/11 network; the role of Mohammed al-Masri in Egypt, Spain, and Italy; and finally the sixth chapter “Common Delinquents Turned into Jihadists: The Final Component of the 3/11 Network” reinforces the importance of prisoner radicalization, group and evolving primary loyalties, and utilitarian benefits of criminal-terrorist linkages.

The final chapter of the first section summarized the culmination of these three components into the operational 3/11 network starting in March 2002 and completed by August 2003.   A helpful Venn diagram of these three components that culminated in the group that conducted the 11-M (3/11) attacks precedes these chapters and is a useful visual reference recounting the initial remnants of Abu Dahdah’s al-Qaeda cell, affiliates of the MICG, and the criminal delinquents turned jihadists (p. xxiv).

The case is strengthened in “Part II. The Al-Qaeda Connection: Revenge, Opportunity, and Strategy.”  Chapter 8 looks at Amer Azizi and the al-Qaeda link to 3/11 (including historic links in Hamburg before 9/11) that suggests Spain (Spain of the Cross”) was a long-held al-Qaeda target.  The remaining six chapters provides detailed analysis, including meetings in Karachi and Mollenbeck; a discussion of Amer Azizi’s role in nurturing the 3/11 network; the relationship of the 3/11 network to al-Qaeda’s general strategy.  In chapter 11 we learn that al-Qaeda, under the guise of the Abu Hafs al-Masri Brigades claimed the attack.

Chapter 12 looks at the tactics, techniques, and procedures (TTPs) exported from 3/11 to other jihadist cells and emphasizes the continuing threat to transit systems worldwide (including the 7/7 attacks in London and threats to the NYC Subway.  In chapter 13 the role of escaped 3/11 conspirators who fled to Iraq where they bolstered the rolls of suicide bombers for Abu Musab al-Zarqawi’s al-Qaeda in Mesopotamia (AQM) which later morphed into ISIS or the Islamic State is examined.  This link provides conceptual continuity with contemporary ISIS actions in Europe and beyond.  Finally, Reinares closes with a chapter on the fall out in Spain including political ramifications, counterterrorism reforms, and continuing jihadist prospects.

The book contains a table of contents, four maps and two figures along with a prologue foreword, and list of abbreviations in the front matter.  In addition it contains detailed endnotes organized by chapter and detailed sources and bibliography including court and prosecutorial records from Spanish National Courts, the Spanish Supreme Court, US District Court records, Italian, French, British, Moroccan, and German court and attorney records.  Police and intelligence documents consulted from Spain, Italy, Morocco, The United States, and European Union, along with Spanish Parliamentary inquiries, and personal interviews provide depth and context to secondary sources.

Al-Qaeda’s Revenge is a thoroughly researched and well-presented case study on the evolution of the 3/11 network.  It provides compelling evidence that the 3/11 network formed from three separate components with significant input from al-Qaeda. The result was a deliberate attack meeting al-Qaeda’s desire to avenge past wrongs and communicate current strategic messages.  The attack wasn’t conducted in response to the invasion of Iraq but provided a vehicle for protesting the invasion.  It wasn’t designed to influence the Spanish election, as it was planned long before, but deeply influenced election and Spanish politics.   Most importantly, it demonstrated the power of networks and their adaptive structure.  As Reinares stated himself: “Overall the Madrid Bombings revealed much about global terrorism as a polymorphous phenomenon—with diverse, heterogeneous interactive components—whose leaders recognized a top-down hierarchy of command and control” (p. 3).

This flexible, adaptive, local-global structure favors innovation and complicates interdiction.  It demands a high degree of co-operation and co-ordination among police and security services at multiple levels (metropolitan, national, regional, global).  This recognition reinforced by the detailed 3/11 case study, makes this book essential reading for intelligence and counterterrorism analysts and practitioners.  It is also valuable reading for politicians, academics, and concerned citizens seeking to understand the global threat potentials arising from the convergence of global threats with local actors (including criminal networks and diaspora communities comprised of brothers, cousins, friends, and neighbors that forge a common bond and network identity.

[1] The total number of dead varies depending upon the account and keeping with current practice excludes the seven terrorists who detonated themselves to avoid capture.  An additional victim succumbed to injuries sustained in the attack and is listed by the 3/11 victims association, Asociación 11-M Afectados del Terrorismo as victim 193.  See “11 años del 11-M: Pilar Manjón lamenta el abandono de las víctimas,” Zoom News, 11 March 2015, http://www.zoomnews.es/499926/actualidad/espana/pilar-manjon-lamenta-ostracismo-las-victimas-once-anos-despues-del-11-m.

[2] The Saint-Michel incident killed 8 and injured 150 others in one attack of a series against the RER (Réseau Express Régional) and Paris Métro conducted by the GIA.  See “Algerians get life for Paris bombings,” BBC News, 30 October 2002, http://news.bbc.co.uk/2/hi/europe/2378997.stm.

[3] The Madrid network used Goma 2 Eco a type of dynamite; TATP was used in the 2005 London attacks also linked to al-Qaeda/jihadist tradecraft.

Thank you so much for this…

Thank you so much for this review; it was very informative and interesting for me to read it. I started reading this book a few days ago, and I like it. Some parts are a little bit hard for me to understand, but I think I need more time to process all the info. And I used some info from the book in my paper but had to use the help of https://edubirdie.com/annotated-bibliography-writing-service because when you still need to finish the book, it's hard to write such a thing without help. But I will for sure finish it, and I think after your review, it will be easier for me to understand everything.