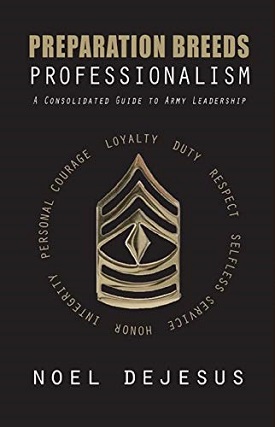 I was excited to see a photo of “Preparation Breeds Professionalism” show up in my Twitter timeline. Could it really be a piece of independently produced Professional Military Education (PME) by an NCO? I was excited by the possibility of a strong NCO voice entering the independent PME community. I rushed over to Amazon to pick up a copy. The price seemed to be very reasonable at $5.99. After waiting a few days, it showed up in my mailbox. So excited to see the book, I ripped opened that package on the way up in the elevator. By the time I reached my floor, I had realized I was in for disappointment.

Flipping through the pages of this little book, I quickly realized that there was likely little there. Inside this 5”x8” book you will find 1”+ margins with the text more than single spaced. With maybe 100 words per page, the content of this entire book is probably a ~10 page “academic” article. Realizing that there was little chance to present new and useful information in such little content, this book was thrown on my counter and left for a week.

I will admit that I have been accused on more than one occasion of taking terms very seriously. This is because I have a deep belief that specific words have specific meanings and if we use language carelessly, it leads to confusion. I find it difficult to accept the title of this book as it claims to be a “consolidated” guide to Army leadership drawn from the experiences of three First Sergeants. “Consolidation” comes from the Latin roots to “bring together” and “make solid.” When we think of a “consolidation” loan, we think about bringing several smaller loans together to one larger and comprehensive loan. It would be hard to believe, or very disappointing if true, that the sum of leadership guidance by three First Sergeants could be collected into a book of so few pages. The author would have been far better off utilizing the term “abbreviated” in place of his use of “consolidated.”

If I had to guess, I would say this book was likely born from an assignment within the Non-Commission Officer Education System that was later thrown into a format suitable for self-publishing. This book suffers from the same errors as a lot of military publications that speak to subjects at the theoretical level but lack the resources and guidance that would be required to implement the practices at the level of individual Soldiers. The most useful information in the entire book is a recommended reading list of five books presented by 1SG Ruiz. I found the descriptions of Army leadership, attributes, competencies, and values and to little more than paraphrasing of the official Army definitions. This is often followed by a few sentences that seeks to expand on these ideas but is at such theoretical levels that it holds little value. Three leadership philosophies are presented without explanation of what a leadership philosophy is or why it is important. In the end, this book provides the macrolevel understanding of Army theories that might make an NCO seem sophisticated standing in front of a formation using all the right words but is unlikely to improve the actual understanding and performance of Soldiers.

While I do have significant criticism for this book, I do believe it could serve as a good outline for a book that could have great impact on Soldiers if it was “fleshed out.” I would challenge the author or any other NCO to consider writing such a book. My recommendations to add “meat to the bone” would include the following:

1). Constantly challenge the readers to question the underlying assumptions used to build the Army leadership theory. Just as an unexamined life isn’t worth living, using unexamined theories are not helpful to the U.S. Military. The NCO Corps hold significant untapped potential that could be utilized to advance our understanding of leadership theory. If you present Army theories as absolute and fully established, we are not engaging an audience that could hold the key to advancing these theories. We should be presenting enough information to explain why the Army theory is correct and how we come to the conclusions that we have.

2). We truly need to question the Army values. How was starting with the “leadership” acronym we wanted and working backwards to find the values ever a good idea for the Army? Challenge the reader to think about what the Army values should be? Ask the reader to examine and define their own value system and compare them to the established Army value system (one of the Self-Development practices recommended by my 2016 study). Possibly provide vignettes concerning how the Army values has engaged different levels of the NCO Corps. Then get even more advanced. Make the audience realize that the Army values can sometimes conflict with each other. I could imagine a whole series of questions that would challenge the audience to truly think about ethical situations before they had to face them in real-life. You might even present some ideas on how to evaluate situations in cases where the values conflict with each other to find the best possible reaction.

4). Include historic examples of NCO leadership on the battlefield. These may be stories of individual battles or entire careers. These historic examples could be used to explain specific leadership traits and their larger impact on the military. This would also be helpful to explaining how modern Soldiers sound on a rich foundation of military heritage.

5). Consider creating an expanded recommended “resource list.” This would be similar to a reading list but include resources in other mediums like popular movies, online videos, games, staff rides, etc. Even though it is a Marine theory, we should ensure we include the “The Strategic Corporal” concept of General Charles Krulak. These resources could be presented in one of several different organizations, for example sorted by rank or topic. By doing so, one book could serve as a gateway to other materials useful for the preparation of Soldiers.

If these suggestions were followed, it would result in one or more books with hundreds of truly useful pages of information on Army Leadership.

In the end, I do not recommend “Preparation Breeds Professionalism” and would encourage Soldiers to spend their money elsewhere. “An English Woman-Sergeant in the Serbian Army” by Flores Sandes or “With the Old Breed: At Peleliu and Okinawa” by Eugene Sledge are a couple useful books written by NCOs that come to mind. In the future, I hope an NCO will take up the challenge of writing a leadership theory book from the unique “lens” of the NCO Corps that might serve to improve the performance and professionalism of our Soldiers.