The recent dustup with Gen Milley, regarding his decision to award a beret to military assistance troops, reminds me of a previous similar battle of the beret within the Army-specifically, the award of a green beret to Special Forces by President John F. Kennedy.  As this event proves, nothing much was or is easy regarding the subject.  Today, we have a proliferation of colored berets within “elite” and general-purpose forces. This, the beret, is a relatively recent phenomenon and has usually been fraught with emotions, resentments and reactions proving the point that when it comes to uniforms, nothing is easy.

When I commanded 1-75th Rangers, I became good friends with retired Lieutenant General William P. Yarborough, who as Commanding General of Special Forces, convinced President Kennedy to award a green beret over the strenuous objections of Army leadership.  I often visited him at his home in Southern Pines when training with my unit at Ft Bragg and Joint Special Operations Command.  He talked many times about the hell he went through regarding the beret from his superiors at XVIII Abn Corps and the Army Chief of Staff. 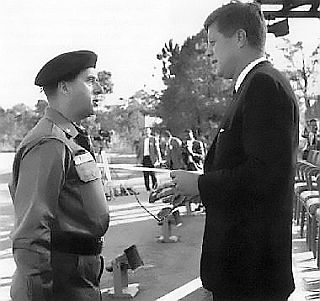 Very soon after JFK was inaugurated, staffers from Congress and the White House had visited Yarborough and his elements regarding unconventional warfare and working possible Vietnam and Laotian scenarios.  He fielded calls from the White House, Robert and Ted Kennedy, and other Kennedy staff.

He reported all this to the Corps Commanding General, LTG Hamilton Howze, who would get apoplectic regarding breach of command protocol. At this point, MG Yarborough had a reputation for being an independent actor-well-earned in WW II.  Inter alia, he designed the present day jump wings, the backgrounds for the wings, selected the jump boot style and designed the WWII paratrooper uniform.  He was highly creative, unconstrained intellectually and not afraid to confront his seniors.

It was Yarborough's opinion to me, that he had been assigned as CG of the Special Forces contingent to "put him on ice" as a go nowhere assignment.  At this time, the early 1960’s, SF was a backwater from the “real army.”  Yarborough explained that Howze was extremely worried that if SF grew, it would rob the Airborne of its quality NCO's.  Hence, he consistently ordered Yarborough to have all inquiries funneled through Corps-a requirement which Yarborough passed at each outside call and was studiously ignored by the caller.  Finally, the White House sent a notice that JFK would visit Bragg, specifically to visit the SF contingent and Gen Yarborough personally, and would stay for the bulk of the day.  Schedule of events requested.

Howze personally took charge of building the schedule and filled it with a lot of non-SF events, concluding with a walk through of the SF area, finished by a 15-minute discussion with Howze, CG 82d, Corps and division chiefs of staff and Yarborough. This was not run by Yarborough before sending, only after.

Offline, the White House called Yarborough and asked him to frame an alternative schedule "with no finger prints."   JFK had seen the Corps draft and was unhappy.  Concurrently, a staffer had asked Yarborough what he needed for an expanded SF should JFK desire to expand its role-especially in Southeast Asia.  Instructions were to send the response as two separate private documents.

Yarborough, to maintain privacy, wrote his suggestions at home in longhand and mailed it unsigned without a return address.  He replied that he needed more personnel and selection authority, greater land space autonomous to SF, proficiency pay, travel funds and other resources as well as a distinctive headgear like the British and French, suggesting a green beret-a traditional commando color. He added that green was the color of woods and jungle and would relate to the SF mission.  His rationale for the beret, was that most of the foreign nations he might work in had some form of berets and that the previous colonial elements, particularly the French, had a variety of colored distinctive berets for their deployed forces. None of this was reported to Howze.

Accordingly, the White House, through the JCS, called XVIII Abn Corps with a "suggested schedule" that paralleled Yarborough’s and specifically asked for a private one on one between JFK and Yarborough for 30 minutes.  Howze, upon reading, was enraged and dressed down Yarborough who said nothing but saluted and left the office.

Howze, then re-worked the schedule and assigned himself as JFK's post escort officer and kept Yarborough at a distance as much as possible during the visit.  JFK, briefed prior on the personality issues as well as Yarborough's concepts and needs, beckoned to Yarborough and told Howze that he wanted Yarborough by his side.  JFK asked direct questions to Yarborough and casually asked him in Howze's presence, if he thinks a beret would be useful to identify the SF troops..."Much like the British and French special units?"  Yarborough, pausing as if to reflect, replied that would be a great idea. If you see photos of the visit, you will note several that show Howze or a Corps officer escorting JFK at an SF event-not Yarborough.

At the conclusion, JFK asked Howze to join him and Yarborough in a small closed session with the most senior Army and JCS attendees.  JFK outlined his plans for SF and addresses Laos, Cambodia, Thailand and Vietnam as his concerns.  He asked Yarborough direct questions regarding resourcing, needs, issues at Bragg etc.  JFK directed these be provided and provided a schedule for having trained elements in these countries. He asked that Yarborough personally call a White House staffer weekly for updates-this in Howze' presence.  Most ominously, he orders that Yarborough be given authority to rapidly recruit from the entire Army base on a volunteer basis and that he start at Ft Bragg.  JFK pointedly asked Howze to support the initiative.  Later, seeing the handwriting, Howze posited himself as SF's greatest friend during this buildup period.

The battle of the beret has been a long and never-ending campaign for a multitude of Army Chiefs of Staff.  All we can be sure of is that this will be a never concluded campaign.

Any thought been given for a 10-gallon Stetson hat? The advantage over a beret is the Stetson has a wide brim that the Army could stipulate in the procurement contract to have a snap-on-and-off brim to be used as a Frisbee during down time.

Probably a non-starter...However, as I always do, I enjoyed Nightingale's observations/comments.

Enjoyed the article so much I forgot to say what I meant to say. The article explains exactly why only Army Special Forces should wear a beret and all others should not. Drive on!

Outstanding! All the Way, Sir!