Are We Building Battleships?

Are We Building Battleships? 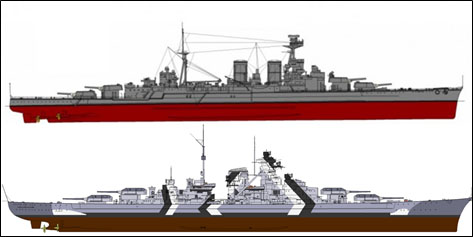 Diagram: H.M.S. Hood (top), a battleship of the British Royal Navy that the German Battleship Bismarck (bottom) sunk with plunging fire on 24 May 1941. The H.M.S. Hood’s hull (commissioned 1920) was designed to withstand flat-trajectory projectiles and was vulnerable to high-angle shells that could pierce her deck. In turn, the more modern Bismarck (commissioned 1939) was disabled by primitive British torpedo planes and eventually sank on 27 May 1941. Photos taken from www.whiteensignmodels.com and www.kbismarck.com, respectively.

At the beginning of the American Civil War formations of Federal and Confederate armies faced off in pseudo-Napoleonic battles where officers trained in Napoleonic doctrines maneuvered closely packed formations against the rifled musket and the minié ball. By 1864, trench warfare, mines, and mortars defined the terrible battles of Cold Harbor and Petersburg – foreshadowing the trenches of World War I. In the battles of the Franco-Prussian War of 1870-1871, the Prussian Guard Corps attacked with frontal assaults against prepared French defensive positions – winning the battles of Wissembourg, Spicheren, and Gravelotte at enormous cost. [i] Across the imperial armies of Europe large cavalry units filled with sons of the aristocracy prove worthless against the coming storm of steel. Strategies to break the stalemate persisted in using the frontal attacked even as artillery, machine guns and other technologies of the industrial revolution stripped Europe of a generation of men.

Soldiers of the Second World War II suffered lessons unlearned from the First World War. World War I saw the first use of submarine warfare by the Imperial German Navy against the British Isles, but Britain failed to invest seriously in anti-submarine technology until after it began to grapple with Nazi Kriegsmarine in the late 1930s. Battleships being the pride of the Royal Navy, prevented the Admiralty from investing in corvettes, frigates, and coastal defense aircraft - anti-submarine weapons. Even the tried and tested tactics of defeating U-Boat operations with merchant ship convoys was discarded in favor of creating “hunting groups” that appealed to the ego of the Royal Navy, until the tonnage lost to submarines threatened the survival of Great Britain. It took time, tonnage sunk, and the lives of many sailors before the technologies of radar, sonar, aircraft carriers and long-range aircraft were recognized for their value in the war.

Warfare evolved in all of these conflicts. Some of the evolutions resulted from the advent of new technologies on the battlefield and new tactics to accommodate them, or vice versa. The massed formations of the American Civil War, the Franco-Prussian War, and World War I all succumbed to the technologies pitted against them. Other evolutions came from doctrinal theories. The Second World War saw the realization of fire and maneuver that the Great War birthed two decades prior. General Võ Nguyên Giáp’s progression through Mao Zedong’s stages of revolutionary warfare in Indochina (1954-1975) saw the evolution of guerrilla tactics into conventional, city-destroying warfare.[ii]

The US presence in Iraq, from 1990-2018, oversaw significant changes in war fighting. Schwartzkopf’s Left Hook during Operation Desert Storm preceded a decade of No-Fly Zone enforcement, and then the Thunder Run of the 2003 invasion. During the occupation, the insurgency evolved, growing in sophistication and complexity as al-Qaeda-trained fighters mixed with Saddamists, Shia militias, and other armed groups – refining their tactics, coordinating spectacular attacks, and attacking the perceived Coalition weakness – domestic public opinion. The US Army Doctrine of Full-Spectrum Operations, fresh from replacing Air-Land Battle, had to be tweaked to include Military, Police, and Border Training Teams (MTTs, PTTs, and BTTs, respectively) while artillery, logistics, and armor soldiers performed non-standard missions counter-insurgency missions in hastily designed up-armored and Mine-Resistant Ambush Protected (MRAP) vehicles.

Now, 15 years after the 2003 invasion of Iraq, the US Army is fielding the Security Force Assistance Brigades (SFAB) and began employing them - the 1st SFAB in a security force-building mission to Afghanistan.[iii] The SFAB fits neatly into a doctrinal hole that the MTTs, PTTs, and BTTs carved out nearly a decade ago. However, before we can celebrate the arrival of the SFAB, we must all recognize that this conflict continues to evolve. Recall, the trenches were dug at the end of the American Civil War; the convoy system was employed at the end of World War I; and the aircraft carrier was dominant at the end of World War II – after the pre-war ideas had crumbled in the face of the new reality.

Although the US military is heavily engaged in massive and wide-spread state institution building, in Iraq and Syria, a quick survey of current warfare shows other developments worth noting.  In 2014, the Russian Federation invaded Ukraine and unidentifiable uniformed fighters, a.k.a. “little green men,” showed up on the battlefield. In 2017, the Iraqi Army re-took the city of Mosul from the Islamic State in an urban battle that witnessed the worst destruction since World War II. In 2018, US-backed Kurdish forces in northern Syria fought a battle with Russian mercenaries supporting the Assad regime. In the information domain, sophisticated cyber-attacks against civilian and military infrastructure, influence of domestic information consumption, and, yes, election interference are tactics in practice – if not yet widespread use.

The world has prospered while the US assumed a superpower's role of active involvement in maintaining global security – both inside and outside of the Cold War paradigm. However, among many possible ramifications of recent questions regarding the reliability of the United States global security guarantees and commitment to NATO, an increase in the likelihood and number of regional, conventional conflicts; conflicts that erupt under the supposition that the United States will could remain distant. These future conflicts, where institution-building brigades and a reconstruction mindset will take a backseat to the employment of conventional arms and military formations on the battlefield.

Therefore, it is worth asking: Is the US Military committing the same sins as our military predecessors of the past 200 years? Is the MRAP the modern-day equivalent to the pre-World War I mounted cavalry? Will the SFABs be useful in the attrition of urban combat against a near-peer? Even the recapture of Mosul in 2017 indicates that our own wars continue to evolve, and setting aside our innovation to solve the Improvised Explosive Device (IED) problems in the wars of Iraq and Afghanistan, are we paying enough attention to the wars of 2018, which are currently the testbeds for future global war?[iv]

Are we building battleships?

The views expressed in this article are those of the author and do not reflect the official policy or position of the Department of the Army, Department of Defense, or the U.S. Government.

Buttar, Prit. Collision of Empires: The War on the Eastern Front in 1914. Oxford: Osprey Publishing, 2014.

[i] Paradoxically, these assaults affirmed the dominance of the offense over the defense in warfare – so long as the strategist accepted the preeminent characteristic of “energy” and “aggressiveness” in the fighting soldier, as well as the necessity to tolerate massive casualties on the offensive vice the assumed casualties of a prolonged, and therefore inconclusive, defensive campaign.

[ii] The 1954 battle of Dien Bien Phu and 1968 battle of Hue offer excellent contrasts to the guerilla warfare of modern memory.

[iii] Ironically, not to Iraq, but to Afghanistan.

[iv] Much should be asked of the US Army Cyber Command and US Army Futures Command mission set, resource, and outlook.

Major Andrew Zapf is a Middle East/North African Foreign Area Officer, formerly an Air Defense Artillery officer. His is a 2004 graduate of the United States Military Academy and holds graduate degrees from Duquesne University and Johns Hopkins University School of Advanced International Studies. He has served at the US Embassy – Rabat, Morocco and in NATO Rapid Deployable – Turkey in Istanbul. He currently serves as an Assistant Professor of Arabic at the United States Military Academy.