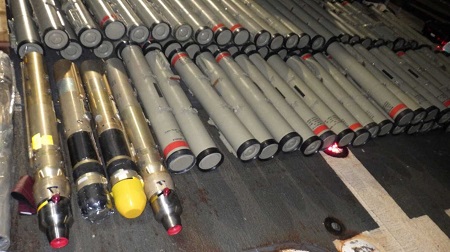 Hundreds of missiles, weapons and munitions likely headed from Iran to Houthi militants in Yemen are in U.S. hands, intercepted during an operation earlier this week in the Arabian Sea.

U.S. Central Command (CENTCOM) announced the seizure Thursday, four days after sailors with the USS Normandy boarded a dhow in the Arabian Sea and found the secret cache.

According to a CENTCOM statement, the dhow was carrying 150 Dehlavieh anti-tank guided missiles, described by U.S. officials as the Iranian versions of Russia’s Kornet anti-tank missiles.

U.S. officials said the initial assessment left little doubt about where the weapons and weapon system components were from.

"Everything points to these weapons being made in Iran," CENTCOM spokesman Commander Zachary Harrell told VOA. "They're all very consistent with what we know about weapons that have been made in Iran."

CENTCOM also said many of the seized weapon systems were identical to advanced systems seized by the USS Forrest Sherman during an operation in the Arabian Sea in November.

Sending such weapons to Yemen "would be in violation of a U.N. Security Council Resolution that prohibits the direct or indirect supply, sale or transfer of weapons to the Houthis," the CENTCOM statement said.

Sailors with the USS Normandy released the dhow’s crew, all with papers showing they were Yemeni fishermen, once the weapons cache was secured.

Officials said there was no evidence to link any of the crew members to any militant groups.

Arrangements were being made for U.S. experts and experts from allied nations and international organizations to inspect the seized weapons.

CENTCOM’s announcement of Sunday’s seizure came as the U.S. Senate was voting 55-45 to pass a resolution limiting President Donald Trump's ability to use military force against Iran without congressional approval.

Trump is expected to veto the measure.

The illegal weapons were seized by the crew of the Ticonderoga-class guided-missile cruiser Normandy, a press release detailed.