U.S. Delegation Heading to Turkey to Push for Syria Cease-fire

U.S. Delegation Heading to Turkey to Push for Syria Cease-fire 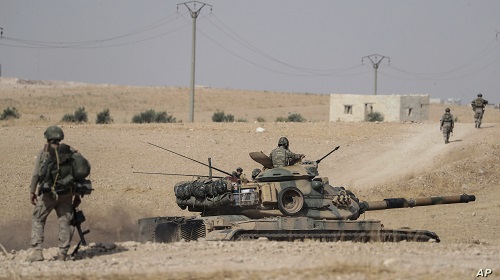 "Mike is heading it up with Secretary [of State Mike] Pompeo. They'll be leaving tomorrow," Trump said at an event in the White House Rose Garden. "We're asking for a cease-fire. We've put the strongest sanctions that you can imagine. We have a lot in store if they don't have an impact, including massive tariffs on steel."

Also joining the delegation to Ankara, which on Thursday is to meet with Turkish President Recep Tayyip Erdogan, will be national security adviser Robert O'Brien and Ambassador James Jeffrey, who is the special envoy for Syria engagement and the global coalition to defeat the Islamic State group.

Pence will voice the U.S. commitment "to reach an immediate cease-fire and the conditions for a negotiated settlement," according to a White House statement.

During the meeting, the vice president also will reiterate Trump's "commitment to maintain punishing economic sanctions on Turkey until a resolution is reached," the statement said.

"Goal number one is to carry out diplomacy to try to find a cease-fire. Get the situation under control. It's very, very confusing. It's dangerous for our troops. It's placing the fight against ISIS [Islamic State] at risk. It's placing at risk the safe imprisonment of almost 10,000 detainees," a State Department official said earlier Tuesday.

The official noted there had not been "any major successful breakout so far of detainees," referring to imprisoned IS fighters and their families. Syrian Kurdish officials have said hundreds of suspected IS prisoners have escaped.

Officials in Washington said American military aircraft had conducted a "show of force" in Syria after Turkish-backed fighters came too close to American forces during the Turkish offensive into northeastern Syria.

As Turkish-backed militias advanced toward the Lafarge Cement Factory, the SDF set fire to and then vacated its facilities and equipment, a U.S. official said.

"No U.S. forces or equipment were ever in jeopardy and remain within separate, secure facilities. Our priority is protecting the remaining coalition forces at the LCF as multiple forces converge in northeast Syria," said U.S. Army Colonel Myles B. Caggins, a spokesman for Operation Inherent Resolve.

Markey said about 50 weapons were at the Incirlik Air Base, about 400 kilometers from the Syrian border.

Erdogan cut power to Incirlik and prevented U.S. aircraft from flying in or out of the base during the failed 2016 uprising against the Turkish government.

Trump has faced harsh criticism in the week since the White House announced Turkey was going forward with its long-held plans to try to carve out a buffer zone along its border with Syria free from the U.S.-backed Kurdish fighters it accuses of being terrorists linked to separatist Kurds in Turkey. The U.S. military has long said its Kurdish allies have been instrumental in the fight against IS, and the elimination of IS's caliphate.

"We're very concerned about their [Turkey's] actions and the threat that they presented to peace, security, stability and territorial integrity of Syria, of our overall political plans, and the risk of humanitarian disaster, and human rights violations, some of which we've seen not by Turkish troops but by what we call the TSO — Turkish-supported Syrian opposition elements, armed opposition elements, who are responsible for those horrible pictures you saw," the U.S. official said.

Turkey's incursion pushed the U.S.-allied Syrian Democratic Forces to reach an agreement with the Syrian government that has brought Syrian troops back into the northeastern part of the country for the first time in years, including on Monday when they reached Manbij.

A U.S. military spokesman said Tuesday that American troops had left Manbij as part of their withdrawal from the area.

In addition to the call to halt the military operation, the United States raised steel tariffs and halted negotiations on a $100 billion trade deal with Turkey.

U.S. Democrats and Republicans have faulted the Trump administration for what is unfolding, saying the withdrawal of U.S. forces from the area cleared the way for U.S. ally SDF to be put in danger and increased the potential for Islamic State militants under SDF detention to break free and stage a resurgence.

"With one voice, we call on President Trump to support Kurdish communities, to work to ensure that the Turkish military acts with restraint, and to present a clear strategy to defeat ISIS," Pelosi and Schumer said in a joint statement.

Trump spoke Monday with both Erdogan and General Mazloum Kobani, the head of the mostly Kurdish SDF that the United States has relied on to battle IS in Syria.

Erdogan on Tuesday said he told Trump the previous day that Turkey would never declare a cease-fire in northern Syria.