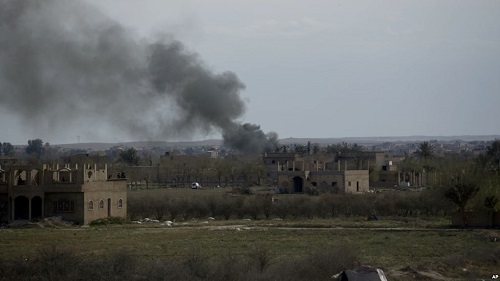 For consecutive nights, bombs rained down on the last scraps of Islamic State-held territory, lighting up the night sky over the northeastern Syrian town of Baghuz.

By Saturday morning, all that remained was a landscape littered with burned-out vehicles, abandoned campsites and other provisions the last of the terror group’s fighters and their families left behind.

On one of the few buildings that still stood, the U.S.-backed Syrian Democratic Forces raised their flag and celebrated the death of a self-declared caliphate that inflicted terror and death on the people it tried to rule.

“After five years of fighting, we stand here to declare the physical defeat of ISIS and the end of its public challenge over all humanity,” SDF Director General Mazloum Kobani told officials and coalition partners at a ceremony to mark the long-awaited victory, using an acronym for the group.

“We announce today the destruction of the so-called Islamic State organization and the end of its ground control in its last pocket in Baghuz region,” he said.

Yet in between the applause and the music of a marching band, SDF commanders and coalition officials paid tribute to the SDF forces, which paid for the victory in blood and treasure — an estimated 11,000 killed in the campaign to roll back IS, which at its height controlled nearly a third of Syria and almost as much of Iraq.

And even until the end, sometime Friday night into Saturday morning, IS put up a vicious defense, using suicide bombers and even children as human shields in an attempt to cling to one last scrap of land over which they could fly their black flag.

The fate of the last of the IS fighters, perhaps several hundred of the terror group’s most hardened and devoted followers, was not clear Saturday.

Observers on the ground said some appeared to have surrendered following the airstrikes that began Thursday night, targeting IS positions next to the Euphrates River and another sliver where IS fighters were backed up against a cliff overlooking the town.

By early Saturday, the airstrikes seemed to focus solely on the area by the cliff, where SDF and coalition officials said the IS fighters might have access to an extensive system of tunnels that helped to hide tens of thousands of people, the last of whom surrendered earlier in the week.

The first indications the fight against IS in Baghuz had ended came early Saturday, said SDF spokesman Mustafa Bali, using Twitter to announce the “total elimination of so-called caliphate.”

Syrian Democratic Forces declare total elimination of so-called caliphate and %100 territorial defeat of ISIS. On this unique day, we commemorate thousands of martyrs whose efforts made the victory possible. #SDFDefeatedISIS

​Only about 12 hours earlier, U.S. President Donald Trump made a similar declaration, telling reporters traveling with him aboard Air Force One that IS had been “100 percent defeated.”

But Trump’s announcement was quickly rejected by U.S. defense officials and the SDF, who said fighting had not yet ended and more airstrikes were being called in.

On Saturday, Trump again hailed the victory over the terror group in Baghuz.

"ISIS's loss of territory is further evidence of its false narrative, which tries to legitimize a record of savagery that includes brutal executions, the exploitation of children as soldiers, and the sexual abuse and murder of women and children,” he said in a statement.

“While on occasion these cowards will resurface, they have lost all prestige and power,” he added. “They are losers and will always be losers."

On Saturday, the SDF’s Kobani was careful to note that while IS’s caliphate had finally been brought down, the danger was far from over, with numerous IS “sleeper cells, which continue to present a great danger in our region and the wider world."

Top U.S. defense and intelligence officials repeatedly have warned that the terror group had long been planning for the demise of its caliphate, and that a clandestine insurgency already had taken root.

“While this is a critical milestone in the fight against ISIS, we understand our work is far from complete,” acting Secretary of Defense Patrick Shanahan said in a statement. “We will continue our work with the Global Coalition to deny ISIS safe haven anywhere in the world."

One senior defense official warned IS still has, at minimum, "tens of thousands" of fighters and supporters across Syria and Iraq, and that much of the group's senior leadership, including self-declared caliph Abu Bakr al-Baghdadi, remains at large.

There also are concerns that IS has thousands more supporters and sympathizers — including upward of 60,000 people who have surrendered since the SDF and coalition launched their final assault last month.

So, too, there are concerns about more than 1,000 foreign fighters being held by the SDF, which has asked repeatedly that they be taken back and prosecuted by their home countries.

“These folks are unrepentant,” the official said. “The seeds for a future caliphate or certainly a persistent clandestine insurgency exist in these large numbers of people who ... are looking to reposition for future perpetuation of ISIS in some form or fashion."

Speaking Saturday at the victory ceremony near Baghuz, the U.S. adviser to the coalition pledged Washington would not abandon the SDF or its other partners, even though Trump has said most of the 2,000 U.S. troops in Syria will be leaving.

“We will continue to support the coalition’s operations in Syria to ensure this enduring defeat,” William Robak said. “We will do what is necessary in the region, including here in Syria and across the globe, to ensure the defeat of this threat.”

France and Britain also reaffirmed their commitment, though disagreements with the U.S. over the next steps remain.

“We will continue to do what is necessary to protect the British people, our allies and partners from the threat Daesh poses,” said Prime Minister Theresa May, using an alternate acronym for IS.

The liberation of the last Daesh-held territory wouldn’t have been possible without the immense courage of UK military and our allies. We will continue to do what is necessary to protect the British people, our Allies and partners from the threat Daesh poses.