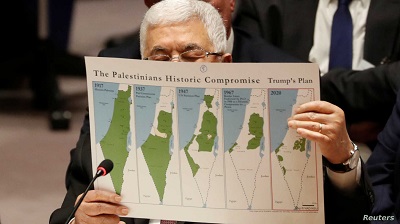 “This plan, or any part in this plan, should not be considered as an international reference for negotiations,” Abbas said of the U.S. proposal. “This is an Israeli-American preemptive plan in order to put an end to the question of Palestine.”

In an impassioned 35-minute address to a packed Security Council chamber, Abbas expressed his anger at the land proposed for a future Palestinian state, holding up a map and saying it looked like “Swiss cheese.”

“Who among you will accept a similar state and similar conditions?” he asked.

Under the plan, Trump said the Palestinians will “double” their land, but must give up about one-third of the West Bank to Israel for it to have an eastern border. In exchange, the administration proposes the Palestinians take two separate pieces of land in the Negev desert.

“This plan will not bring peace or stability to the region, and therefore, we will not accept this plan; we will confront its application on the ground,” Abbas said.

As for the $50 billion in economic incentives contained in the proposal, Abbas said there must be a political solution before an economic one.

“In this historic moment, I would like to extend my hand for peace again, before we waste this final opportunity, and I hope to find a real partner in Israel,” he said.

Abbas said he is ready to start negotiations under the sponsorship of the Quartet and based on internationally agreed parameters.

“I am serious. I am ready to stay here in the United Nations to start these negotiations immediately,” he said.

“If President Abbas was serious about negotiations, he wouldn’t be here today, he would be in Jerusalem or in Washington sitting down with his negotiating partners,” Danon told the council. “But President Abbas is not serious about negotiations or about peace; instead he did what he always does: he came here to distract from his unwillingness to negotiate, to sit down, to speak.”

Danon went a step further, calling for Abbas to step down.

“Let’s not beat around the bush: progress toward peace will not be made as long as President Abbas remains in his position; this is the reality,” Danon said. “Only when he steps down, can Israel and the Palestinians move forward.”

U.S. envoy Kelly Craft characterized Abbas’s statement as “fury rhetoric” and said the parties need to stop talking at each other and begin talking to each other. She defended Trump’s peace proposal as “realistic," adding it can be implemented,  it is an “opening offer” and not set in stone.

“The U.S. plan is more than a path to Palestinian independence; it is a blueprint for the construction of a flourishing Palestinian state,” Craft told the council. “This is not a proposal of peace in theory, but of dignity in practice.”

“This blueprint was presented as if it were the fruit of negotiations,” said Arab League Secretary-General Ahmed Aboul Gheit. “In fact, the Palestinians were not consulted; they weren’t even informed of the content of this plan, which is directly related to their fate.”

He said now they are expected to accept the plan or have it unilaterally implemented and imposed on them.

The council’s European Union members also expressed concern, saying in a joint statement that they remain committed to internationally agreed parameters and that the U.S. plan “departs” from them.

Britain, now living in a post-Brexit reality, took a softer line, saying the U.S. proposal represents a genuine desire to resolve this conflict and that both Israeli and Palestinian leaders should consider them.

The Palestinians had originally sought to have the 15-nation council vote on a draft resolution reaffirming international parameters to resolve the decades-old conflict and calling for a two-state solution based on pre-1967 borders. But after objections and amendments from the United States as well as changes from Britain, the co-sponsors decided not to press immediately for a vote.