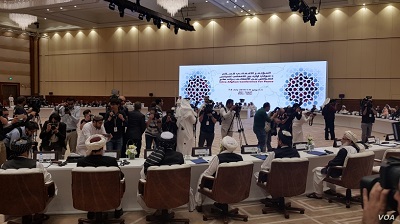 UNITED NATIONS - As negotiations between the U.S. and Taliban collapsed this week, the top U.N. official in Afghanistan called Tuesday for direct intra-Afghan talks to resolve the country’s nearly two-decade old conflict.

Earlier this week, U.S. President Donald Trump called off peace negotiations with the Taliban that his special envoy Zalmay Khalilzad had been carrying on for almost a year, after the Taliban killed 12 people, including a U.S. soldier, in an attack in the capital, Kabul.

The Afghan government was not part of the talks, but President Ashraf Ghani has said the government is willing to engage in peace talks with the Taliban under the right conditions, including a cease-fire.

Many fear the collapse of the U.S.-Taliban talks could lead to more violence in an already dangerous country. In its most recent report, the U.N. mission in Afghanistan documented 1,366 civilian deaths and nearly 2,500 injuries in the first six months of 2019.

Compounding violence fears are presidential elections scheduled for Sept. 28, which the Taliban oppose. The group has threatened to disrupt the process, and has warned citizens to stay away from election-related activities, including rallies and polling booths.

“Concerns still remain ahead of the elections,” Yamamoto said. “One is security, another is voter turnout and the other is possible fraud and irregularities.”

Yamamoto said voter interest in the election is not as high as it could be – possibly because the public was focused on the peace talks or because campaigning only started in late July -- and he appealed to the 9.6 million Afghans who have registered to vote to exercise their right.

“Credible elections would provide an important political foundation for the future of the country, as well as legitimacy and authority to the elected president, which would be particularly important in view of the expected peace process,” he said.

Council members expressed support for both the peace process and the upcoming election and urged the Taliban to retract their threats against the electoral process.

Afghanistan’s U.N. Ambassador Adela Raz told the council that the government is committed to ensuring a “transparent, free, credible and inclusive process” and that election preparations are on-track. She said despite security threats, the Afghan people are determined to hold and participate in the elections.

“Afghanistan wants to move forward, not backward,” she said.