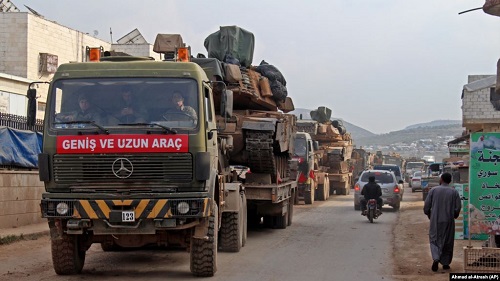 Turkey says its forces have retaliated against Russia-backed Syrian government forces after at least 33 of its soldiers were killed in air strikes in Idlib Province, as NATO condemned Damascus and Moscow for what it called "indiscriminate" bombing in the region.

"Known targets of the [Syrian] regime have come and will continue to come under fire from the air and ground," Turkish President Recep Tayyip Erdogan's communications director, Fahrettin Altun, said in a statement late on February 27.

"We urge the international community to fulfill its responsibilities" and help stop the Syrian government's "crimes against humanity," Altun said.

In the call, Stoltenberg condemned "the indiscriminate air strikes by the Syrian regime and its backer Russia in Idlib Province, and called on them to stop their offensive, to respect international law, and to back UN efforts for a peaceful solution," an alliance spokesman said.

Stoltenberg "urged all parties to deescalate this dangerous situation and avoid further worsening of the horrendous humanitarian situation in the region," he added.

The United States said that "we stand by our NATO ally Turkey" and demanded that Syria and Russia end their "despicable" offensive in Idlib.

"We are looking at options on how we can best support Turkey in this crisis," a State Department spokeswoman said.

Separately, U.S. officials called on Ankara to learn from the fighting in Syria who its true allies are and to cancel its purchase of the sophisticated S-400 missile defense system from Russia.

U.S. Ambassador to NATO Kay Bailey Hutchison said the Turks should see "who is their reliable partner and who isn't."

“I hope that President Erdogan will see that we are the ally of their past and their future and they need to drop the S-400,” she said.

"They see what Russia is, they see what they're doing now, and if they are attacking Turkish troops, then that should outweigh everything else that is happening between Turkey and Russia," she added.

At the UN, France also said it "condemns with the greatest firmness the intense bombardments by the aviation of the regime and its allies, in particular Russia," he said, citing a humanitarian disaster caused by attacks on hospitals, schools, and refugee shelters.

Vassily Nebenzia, Russia's UN ambassador, downplayed widespread reports of a humanitarian disaster in Idlib, saying the "only long-term solution [to conflict in Syria] is to chase the terrorists from the country."

Hours earlier, Governor Rahmi Dogan of the Turkish border province of Hatay said that 33 Turkish soldiers had been killed in Idlib Province in air strikes by Syrian government warplanes.

He added that several others had been wounded, some seriously.

The Syrian Observatory for Human Rights, a London-based war monitor, reported that at least 34 Turkish soldiers had been killed in the air strikes.

Turkey has sent thousands of troops and heavy military equipment into northwest Idlib Province to support rebels looking to hold back an offensive by Syrian government and Russian air forces aimed at recapturing the rebel stronghold.

The fighting has raised concerns that NATO member Turkey could come into direct combat against Russian forces in Syria.

Russia, along with Iran, has provided crucial political, military, and financial support to Syrian President Bashar al-Assad during the country’s long civil war, which has killed more than 400,000 people and displaced millions since it began with a crackdown on antigovernment protesters in March 2011.

The United States and Turkey have backed differing rebel groups, while extremists linked to Al-Qaeda and Islamic State also entered the conflict, although they have mostly been driven from their strongholds.