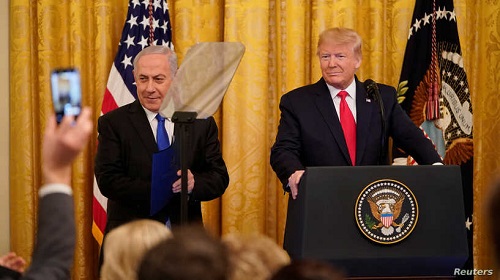 WHITE HOUSE - Hoping to bring about a “new dawn in the Middle East,” U.S. President Donald Trump unveiled his peace plan for the region on Tuesday with Israeli Prime Minister Benjamin Netanyahu standing at his side.

“My vision presents a win-win opportunity for both sides, a realistic two-state solution that resolves the risk of Palestinian statehood to Israel’s security,” said Trump during a Tuesday noon hour event in the White House East Room.

Notably absent was any representative of the Palestinians, who rejected it before getting even a glimpse of the proposal, and who were not included in talks about the plan.

Trump sees such initial rejections as a temporary hitch and said in his remarks he has sent a letter to Abbas, telling him that if he chooses “the path to peace, America and many other countries, we will be there, we will be there to help you in so many different ways.”

Acceptance of the plan would lead to $50 billion of outside investment, a million jobs created for Palestinians over a decade, and a doubling or tripling of Palestinians GDP, promised Trump.

"It is time for the Muslim world to fix the mistake it made in 1948” when Arab states attacked the new state of Israel, added Trump.

Trump proposes a Palestine with limited sovereignty — doubling the size of land currently occupied by Palestinians — and Israel annexing about a third of the disputed West Bank.

Jerusalem would remain Israel’s capital, and the eastern part of the holy city would be the Palestinian capital where the United States would open an embassy to Palestine, said Trump.

“I’m prepared to seize the moment and change history,” the Israeli prime minister told the invited crowd of supporters.

Netanyahu said if the Palestinians abide by the terms laid out, “Israel will be prepared to negotiate peace right away.”

Notably present in the room were ambassadors of three Arab states: Bahrain, Oman and the United Arab Emirates.

“What a pleasure to see you here,” remarked Netanyahu. “And what a sign it portends of the present.”

A neighbor of the Israelis and Palestinians is calling for serious and direct negotiations.

The plan, after nearly three years of discussion between American and Israeli officials, was overseen by Trump son-in-law Jared Kushner.

It includes some exotic proposals — including a high-speed rail link between Gaza and the West Bank, according to David Friedman, the U.S. ambassador to Israel.

“It doesn’t really matter in the short run what the Palestinians say,” Friedman told reporters on a conference call. “They have four years to study it.”

As Friedman spoke to reporters, Trump tweeted a map showing the divisions of territory.

Both Trump and Netanyahu face domestic political woes ahead of elections in their respective countries.

Trump is on trial in the Senate after being impeached by the opposition-controlled House for abuse of power and obstruction of Congress.

Netanyahu, after giving up a push in the Knesset (Parliament) for immunity from prosecution, was indicted in corruption cases just hours before taking the White House stage with Trump.

Trump met separately Monday with Netanyahu and his chief political rival Benny Gantz, who called the peace deal "a significant and historic milestone" and one he looks forward to implementing if he becomes the next Israeli prime minister following next month’s election.